As promised, here is the story of our experience during car registration process at JPJ. For more info, please visit JPJ Website on Vehicle Registration Application Guide.

With the help of blog posts and forums, we found that JPJ Selangor did display all categories of numbers. But current running letters for Selangor at that time wasn’t nice at all, which was BML. Hubby and I would prefer to have KL number, W….M, but anyhow, at that point of time, the letters were W….K. So hubby did play around with few numbers that produce a “sound” out of it. Hahaha!

We took a day off and went to JPJ Selangor at Padang Jawa, to view the numbers on board, as per described in the blogpost. We came early and “tapau” a homemade fried rice, where we ate in the car somewhere at the JPJ parking lot. Gigih tak?!

The atmosphere in JPJ was quite funny yet fun to be at, where we were surrounded with “ulat-ulat” a.k.a runners, who were trying their luck to persuade the officers to cut queue. Yes, you are required to get a number before you are to be attended.

With choices of numbers that we had in hand, we strike through those: 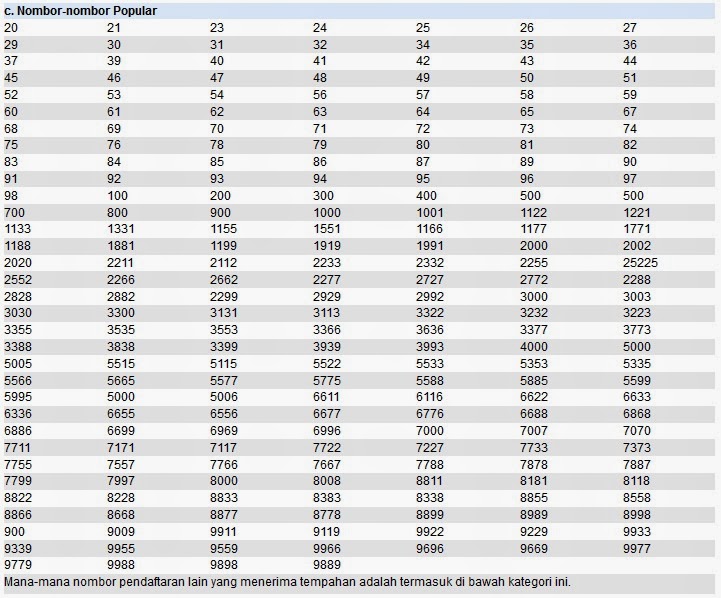 Unfortunately, the number that we wanted has already been taken!

So we mingled around and got to know that there was a way of getting uncollected tendered interesting and popular numbers. What we need to do was to line up in front of the Pengarah’s room and play guessing game with him/her, with his/her said price. The reason being these numbers were not displayed publicly, coz they didn’t want other people get it a lower price but sell it at higher price. Like…what? Can you imagine that? Was this recorded as “a process” anyway? I don’t think so.

Knowing that the queue was long and one can take his/her own sweet time playing guessing game and negotiating the price, we opted to leave. It is said that women can get “better” price compared to men. Well, opposite attraction, perhaps. Hahaha!

We left JPJ Selangor and went to JPJ KL. The process of getting the running number, as well as playing guessing game with Pengarah, were similar! The only difference was JPJ KL didn’t publicly display all types of numbers, and they didn’t even know what was the current running numbers. Pfft!

So we decided not to proceed with the number booking and went down to proceed with another task. Earlier, we saw a newspaper cutting of JPJ introducing a new online system, which is MySikap. This system allows public to do JPJ-related thingy such as license renewal and what not. First step that you required to do was to register at the counter. Hence, we went to the counter and waited for the officer. It was quite long-waited process due to other officers who were passing by and lingered around weren’t able to assist us! The same excuse was given where we haveeeeeeeee to wait for that particular officer. Fine! We waited.

The officer later came and assisted us. She requested for our identification card and registered. She told us to wait for a verification email that is needed to be activated within a week. And that was it! Pfft! We asked her whether name transfer can be done via online but she said that stuff still not ready. We asked her whether we can renew our license via the same online system and again, she answered no. Huh?? She then explained that the system is not yet ready though it was announced in November 2013. Hahaha! This is ridiculous!

Few days after, we received a verification email and tried to activate it. Guess what? After so much hard work of inputting our personal info, the final page gave us an error message! Couldn’t register us? Ok…what else an IT person will talk about than condemning the system kan?! Gheeeees…teruk gile ok system camni…sedih!

The day we got a call confirming that everything was approved, we ensued the car number booking. With Buyer’s Order Form from Nissan in hand, we took a day off and went to JPJ KL. And so the real experience began!

While waiting for our number, we went down to have a peek on uncollected tendered numbers but the queue was quite long. In addition, we got to know that though the starting price was RM300, you can never get a good number with that kind of pricing! What the heck! Ok, we should never waste our time.

We walked up back to 1st Floor and waited in the room. Our number almost getting near, hence I looked for other visitor with longer queue, to swap with mine. Hahaha! I can see that they guy was the happiest person on the floor, for his number was 70 away from mine. We then continued waiting, till one lady we met in front of Pengarah’s room came and joined us. She raised a concern on why didn’t I request to be attended at OKU/Old Citizen/Pregnant Woman Counter. I told her that the applicant was my hubby, not me. She then forced me to just give it a try.

And so I went to the counter and asked for new number, specifically for the special counter. The lady who was on duty, nearlyyyyyyyyyy gave me the number! But the guard who stood beside her asked me who the applicant was! I had to tell that it was my hubby lah kan…so, he didn’t allow me to do so. Pfft! Well, if that can be done, I’m pretty sure runner would be replaced with all pregnant ladies. Hahaha!

I went back and sat. Told the lady, it was impossible. Anyway, we had no issue pun kan. It was after lunch time when our number getting closer and closer! The running number still didn’t change. Owh crap! Suddenly, we overheard someone said that new letter was out! We got excited and re-confirmed with one of the officers. Yes! The letter K that was posted on the wall earlier was taken down and replaced by L. Now the three digits era had started!

While waiting for our turn, we kept on praying for the number that we wanted was not taken. The officer then called us and asked for our selection of numbers. The trickiest part was we wouldn’t know what the current running number was! She told us there were three JPJ centers accessing the system at the same time. So again, we were playing guessing game with the officer, to see whether the said number still available or not! Ya Allahhhhhh!

Four of our selections were not available but in return, we got a better three decreasing digits that were still available! Plus, it can be pronounced as a word! Hahaha! We paid RM200+RM10 (processing fee) and walked out with smile.

What an experience. We actually saved a lot for not using runner. Note that runner will charge up to RM600 for running numbers, so going through all this process by yourself isn’t a hard job, provided you have time to do it.