"Hmmm...mendung jer..." Hubby looked up to the cloudy sky.

The journey continued to Kiama, where we wanted to experience two most amazing sea miracles. From Stanwell Top, we drove an hour, passed by Princess Highway, heading to Wollongong, before we reached at Kiama Blowhole Point Road. We parked our car at the end of the cape where another lighthouse is located. This place is nicely developed and maintained, for the purpose of tourist attraction, complete with info boards, stairs, with gates around the Blowhole Point. 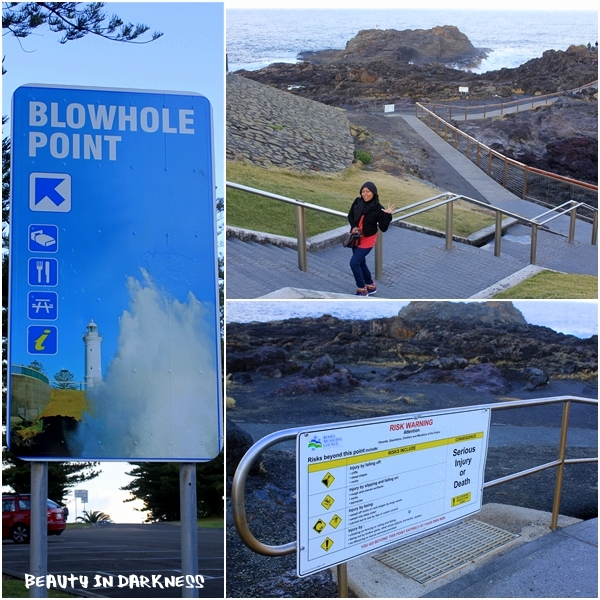 We walked down to the famous Big Blowhole, where it is said can spray water up to 25 meters in the air that can drench any bystanders! 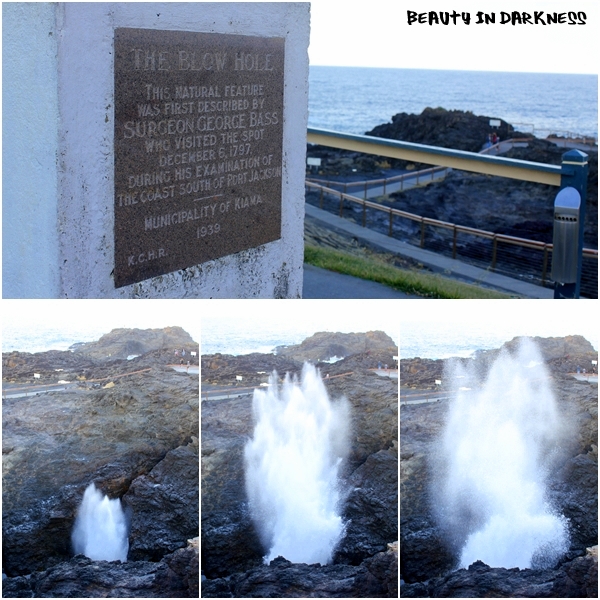 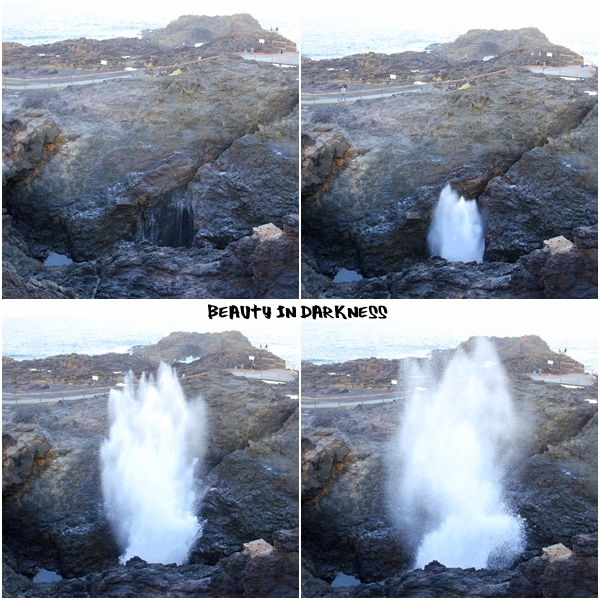 How Blowhole works? With right condition, large waves enter the mouth of Blowhole and compress the air within the inner cavity. As the water leaves, it is forced upward, as the mouth is still blocked by the receding wave. The escaping air causes the loud “oomph” which accompanies the water spout. Paham? Thus, you can experience the water spray, ONLY when there is large wave.

This Kiama Big Blowhole was discovered by George Bass in 1797 after anchoring his whaleboat in Kiama harbour. Anyhow, it is said that Bass wasn’t the first, as local Aboriginals had for generations referred to it as “Khanterintee”. 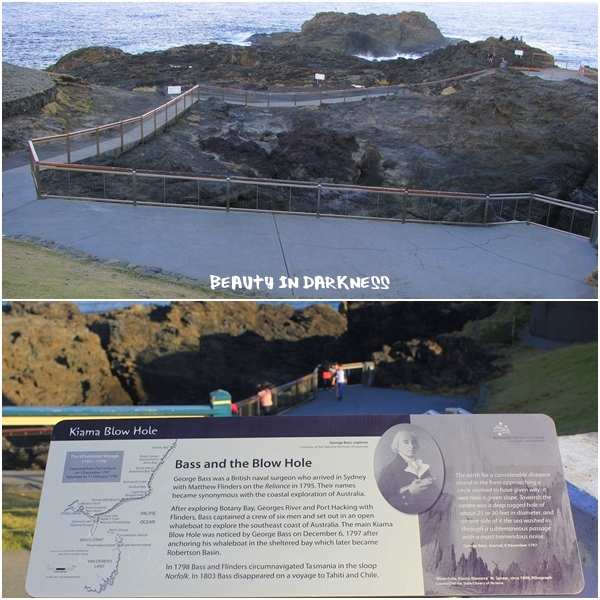 Stand still right before the Blowhole, is the Lighthouse that was established in 1887, purposely built for the manmade harbor. Having fun to the fullest at the Flagstaff Hill’s Lighthouse, this lighthouse had no longer served any fun for us. Hahaha! 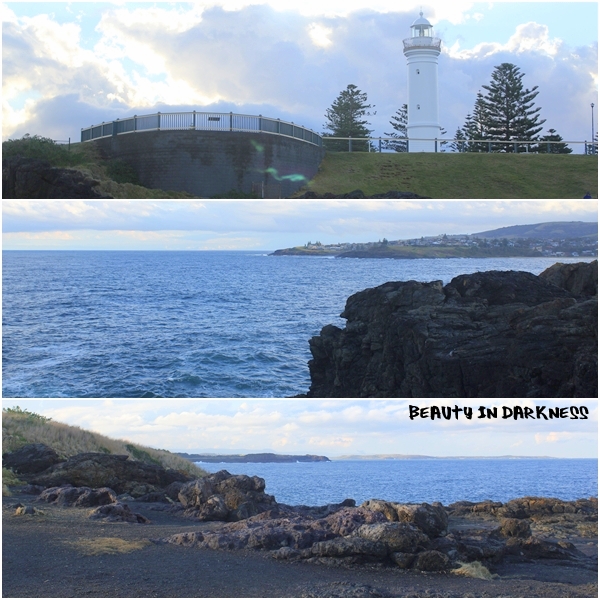 Besides this Blowhole, this site offers panoramic view of the ocean where blue colors of the ocean sparkled in the distance. The sun once in a while, hid behind thick clouds, which affected our mood and the outcomes (pictures). To stimulate the thrill, hubby and I played video capturing where hubby was forced to be the bystander, to experience the water spout! Out of 10 blows, he might get sprinkled twice, with the help of huge wave and strong wind.

We laughed at each other, but still, astonished with this super-NATURE-al formation. 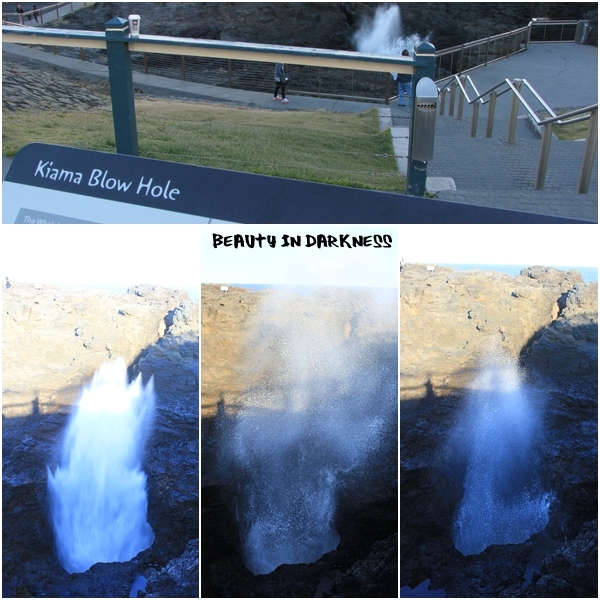 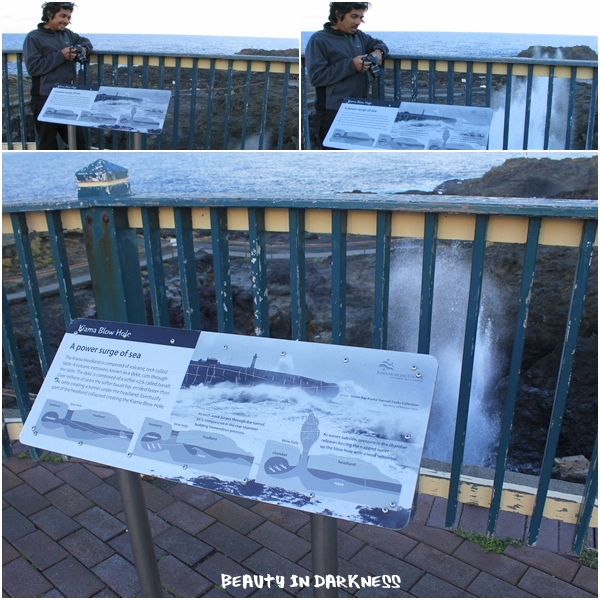 After a while spending time at Big Blowhole, we drove few minutes to the second-less-famous Blowhole in Kiama, Little Blowhole, known as Big Blowhole’s little cousin.

Hubby explained “Little Blowhole should be more interesting, as the water spray is higher…and less people.”

Finding this Little Blowhole was neither that hard nor easy, for there were signboards, but it is located right in front of someone’s house. Untungla orang tu, hari-hari bleh tengok Blowhole kannn! Overlooking at the left and right of this site, there was approximately 1.8km beautiful scenic coastal walk. This place also officially announced as Little Blowhole Reserve “Endeavour Lookout”, to commemorate the 200th anniversary of the discovery and exploration of the east coast of Australia by Captain James Cook in 1770. 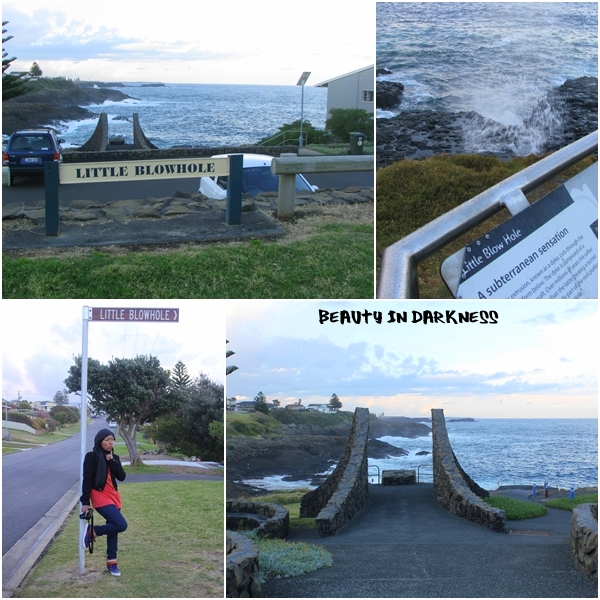 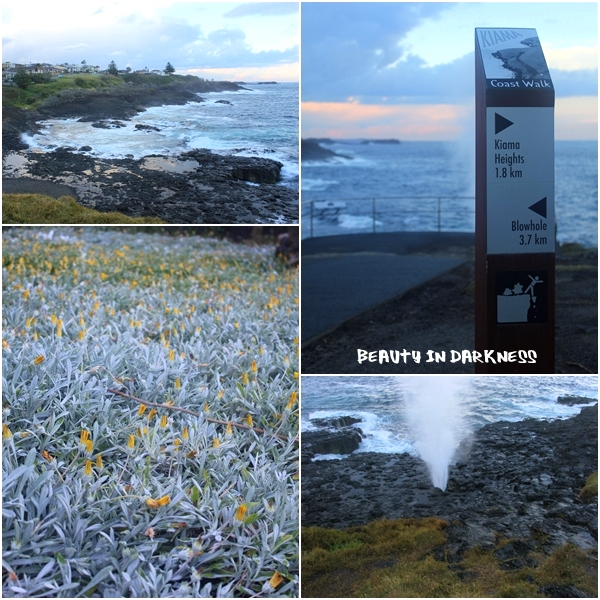 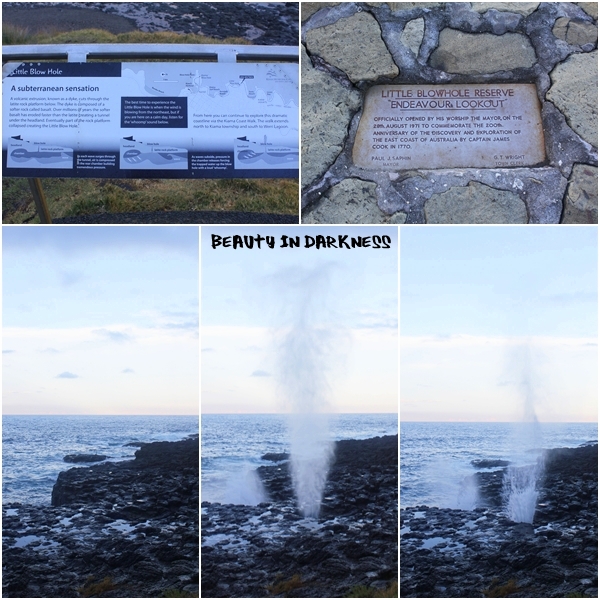 I then walked further down towards the monument, and this time, I became the bystander, while hubby was shooting me out. I seriously didn’t expect the water spray that high, so I ran up and down and acted comical. Hahaha! 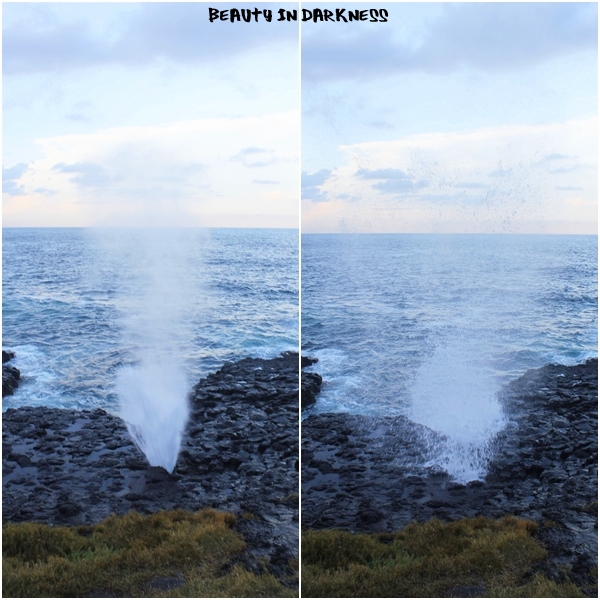 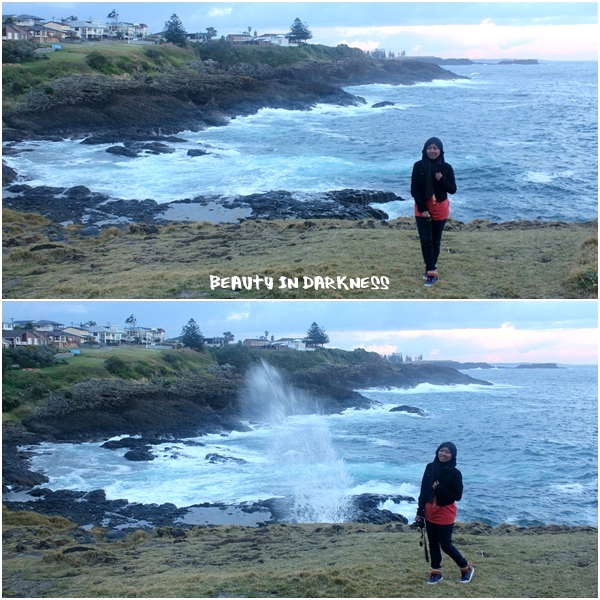 We then walked closer to Little Blowhole, where two locals were also enjoying the scene. Strong wind and huge wave helped the formation a lot, hence, we experienced higher water spray almost all the time, compared to Big Blowhole. The reason being was the smaller the hole, the higher the pressure, the higher the spout.

“Ayang! Anjing! Anjing!” Hubby suddenly panicked BUT HE WAS LAUGHING. There was a huge black dog running towards me! I had no idea whether I should run or stand still or play dead!

“AAAAAAAAAAAAAA SHOOSHHH! SHOOSHHH!” I tried to chase it away AND I WAS ALSO LAUGHING!

It was OK if the dog was dried, but being sprinkled with Blowhole, I straight away thought that “Where the hell I should find tanah to samak???!!!” HAHAHAHA!

The dog owner then called his dog and the dog backed off from me and ran to its owner. FIUH!

AND BOTH OF US STILL LAUGHING.

Note : So called “The Bends”, Mount Pleasant Lookout is a must visit to place, for excellent views over the town, the beach, the landscape of coast of Kiama.

Anyhow, we had to pass the plan. It was getting dark and we had to find a way to our place for the night, before the reception closed. On the way, we stopped at Centro Kiama, and went into Woolworths, where we grabbed few things for dinner. 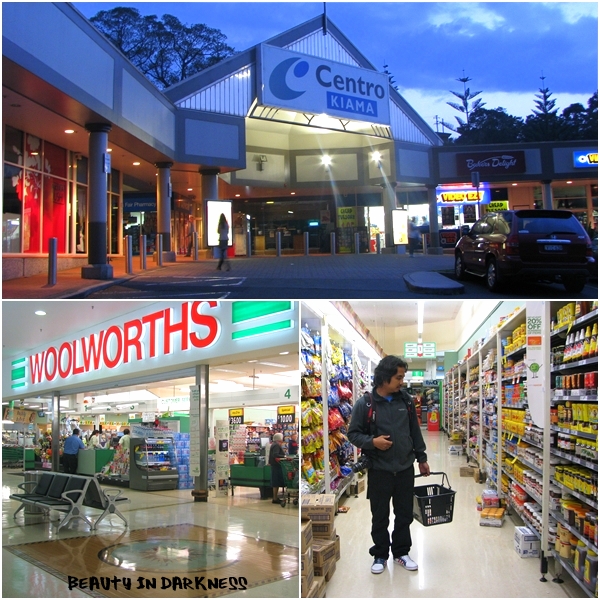 “Ahhhh sudah…hujan la pulak!” It was raining cats and dogs! We quickly ran to the car and drove carefully to Bong Bong Street.

The Kiama Ocean View Motor Inn wasn’t that far from the Big Blowhole. It is located right before the beach where we can feel the strong wind blew wild to our face, complete with heavy rain. Hubby booked this place from Latestays.com, with the price of AUD84 per night. Though it was raining, the best part was the drive-in. We parked our car, right in front of the room, took out everything and ran as fast as we can, to avoid rain. 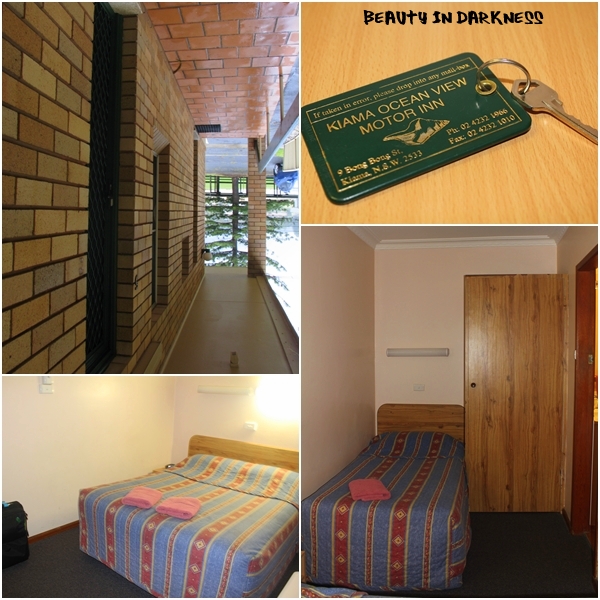 The host was friendly and he told us a lot about Kiama, especially the weather of the day. He told us this was the right time to experience Blowhole, for it can go up to the max height due to strong wind and rain.

The room was okay, with one queen bed and one single bed. Closet, bathroom, TV were also available. We heated the room and prepared our dinner. We settled with self-wrapped “wonder wraps” (contained chili tuna and salads), with blueberry scones, smoky bbq potato chips, and two bottles of orange-lime soda. Jadilaaaaa…sedap makan hujan-hujan nih! 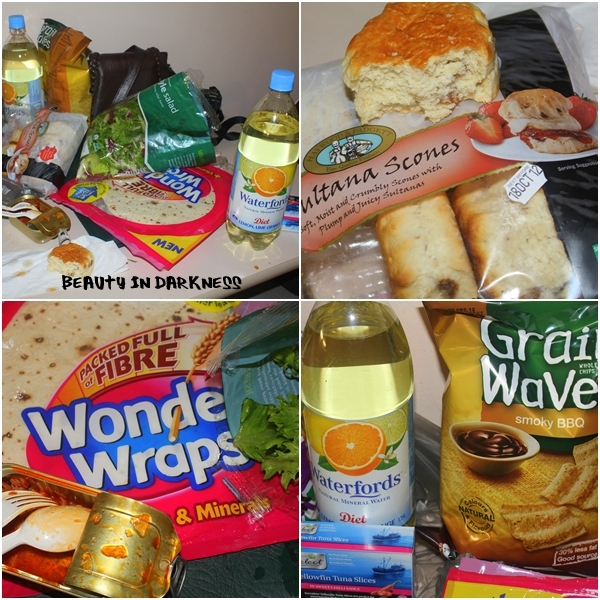 Unbuttoned by Biqque at 2:04 PM

This is about travel n vacation, travel-australia-kiama

I got excited watching at your gif. movement of the blow hole. Amazed sekejap. I guess if i were there i would be super excited too.

Hey! I love the video showing water shoooshing up and up repeatedly. I stared at it for so long and felt like I was there! LOL

zara, that is what i want the readers to feel. the blowholes are seriously amazing!

twilight, hahaha! u funny lah! did it mesmerize u that much? hahaha!