Heartbreaking News : We Lost The Twins

We WERE having Monoamniotic-Monochorionic (MoMo) twins, (identical twins that share same amniotic sac and placenta), which is "extremely" rare and high risk (50-50, mom and babies). Monoamniotic twins are rare, with an occurrence of 1 in 35,000 to 1 in 60,000 pregnancies, so I should thank God for being selected, for at least, by 13 weeks period of time. Allah is Great! Dengan kuasa Allah juga, we lost our babies at 13 weeks, where both stopped growing at 8 weeks and 7 weeks, each. Though we are still recovering from the heartbreak, we accept what has written and redha akan hikmahNya. DaripadaNya mereka datang, kepadaNya mereka pergi. Without knowing the gender, we believe that Adam is created first, thus, may

wait for us, right at Jannah's doorstep. Al-fatihah. And we will not stop trying. InsyaAllah. Semoga Allah perkenankan doa-doa kami." 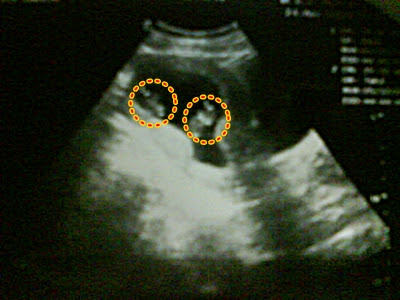 Note : Post on babies chrono will be out soon. May this story remains as beautiful memory for us.

UPDATE! Part One : The Day I Found That I Am Pregnant ( Click HERE )

UPDATE! Part Two : The Day I Found That I Lost The Twins. ( Click HERE ) 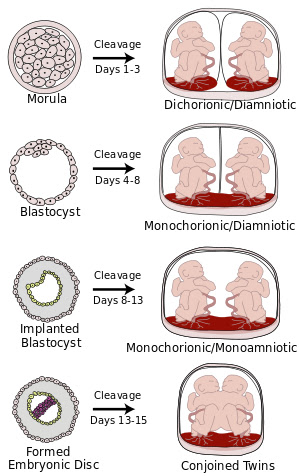 Pic 1 : Normal. Most safe twins. Non-identical.
Pic 2 : Seldom. Quite unsafe but still deliverable. Identical.
Pic 3 : Rare. 50-50. One could get less nutrient. One die, another could follow. Identical. (This is my twins.)
Pic 4 : Abnormal. Most unsafe. Conjoint. No one wants this to happen.

Complications
The survival rate for monoamniotic twins has been shown to be as high as 81%[4] to 95%[5] in 2009 with aggressive fetal monitoring, although previously reported as being between 50%[1] to 60%.[3] Causes of mortality and morbidity include:
Diagnosis
Ultrasound is the only way to detect MoMo twins before birth.[3] It can show the lack of a membrane between the twins after a couple of weeks' gestation, when the membrane would be visible if present.[3]

There is a correlation between having a single yolk sac and having a single amniotic sac.[1] However, it is difficult to detect the number of yolk sacs, because the yolk sac disappears during embryogenesis.[1]

Treatment
Only a few treatments can give any improvements.

Sulindac has been used experimentally in some monoamniotic twins, lowering the amount of amniotic fluid and thereby inhibiting fetal movement. This is believed to lower the risk of cord entanglement and compression. However, the potential side effects of the drug have been insufficiently investigated.[1][3]

Regular and aggressive fetal monitoring is recommended for cases of monoamniotic twins to look for cord entanglement beginning after viability. Many women enter inpatient care, with continuous monitoring,[1] preferably in the care of a perinatologist, an obstetrician that specialises in high risk pregnancies.[3]

All monoamniotic twins are delivered prematurely by cesarean section, since the risk of cord entanglement and/or cord compression becomes too great in the third trimester. The cesarean is usually performed at 32, 34 or 36 weeks.[3] Many monoamniotic twins experience life-threatening complications as early as 26 weeks, motivating immediate delivery. However, delivery around 26 weeks is associated with life-threatening complications of preterm birth.[1] Steroids may be administered to stimulate the babies' lung development[3] and decrease the risk of infant respiratory distress syndrome. Vaginal birth rather than cesarean section causes cord prolapse, with the first baby delivered pulling the placenta shared with the baby being left inside.
Source Wiki.

The deepest condolence to u n hubby, be strong! been through the same situation, 6 months though...:(
It's hard to swallow but like u said, never stop trying... Insyaalah, ada rezeki...

* Hope you're doing great at this point of time.

I am truly so sad for your lost. Be strong, Biqque. Do take care of yourself.

BE STRONGER...because both of you are strong.