Right after breakfast on the roof, we packed our bags and checked out from Lofi Inn Hostel. From this hotel, we continued walking to the next location, The Merlion Park. We took MRT from Little India and stopped at Raffles Place. From there, we asked few locals, how to go to Fullerton Hotel.

Enjoying the Singapore River along the way to the Fullerton Hotel was quite breathtaking. The finance and commercial buildings are separated on the South Bank, while the North Bank was reserved for the government use. The layouts somehow combined the urban and traditional scene, where we can see old-fashioned boat, cruising by the river, in between on those modern skyscrapers. 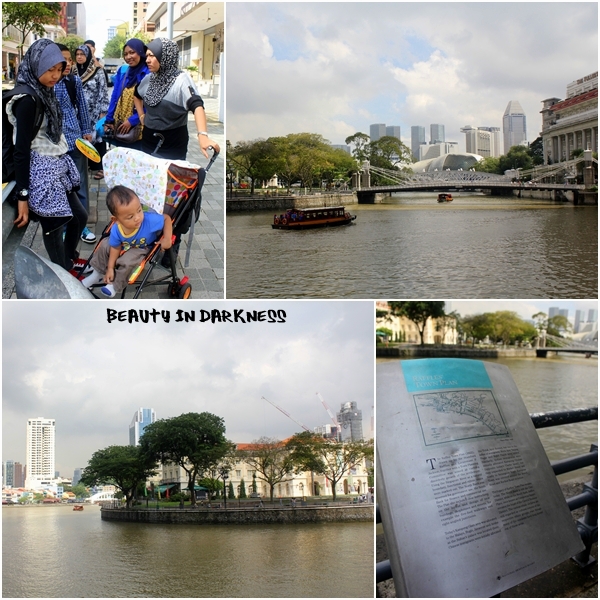 We further the walk, tried to get closer to the beautiful white Cavenagh Bridge, built by P&W Maclellan in 1868. The structure seemed solid still, but it is prohibited to any vehicle, including cattle and horses. We didn’t cross the bridge since we were getting to different direction, but we did set our foot on this bridge, to feel the history. 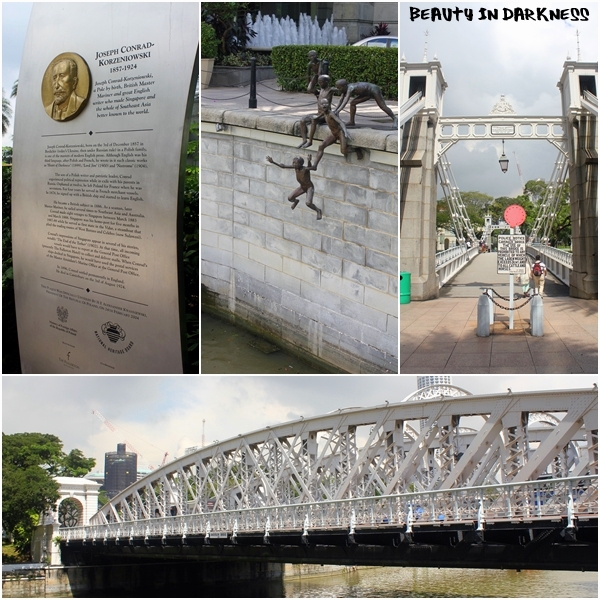 While waiting for Kak Ngah to feed Kilfie, we walked around the Fullerton Hotel and snapped few pictures. We found stack of red bricks, Foundation Stone of the Monument, a tribute to the early founders of Singapore that was laid by Inche Yusof Bin Ishak, the President of the Republic of Singapore on 1970. Anyhow, it is Joseph Conrad-Korzeniowski, a British Master but Pole by birth, who responsible to make Singapore and SEA better known to the world. 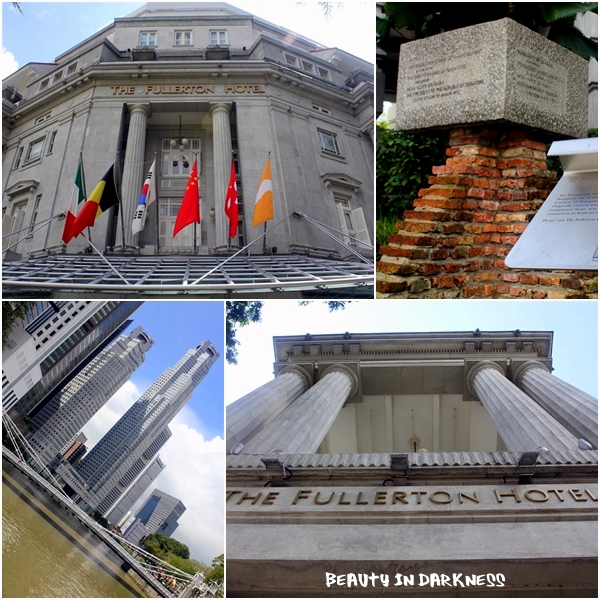 Next to this landmark, there were statues of a Scotsman mediating between Chinese trader, Malay chief, with Indian and Chinese coolies load sacks onto a bullock cart. Formerly known as Tanjung Tangkap, this was the exact place where they catch all merchants as their boats entered the river to trade. I wasn’t sure for what reason of these people being caught, but that was what happened then.

Knowing the history (Pak Ein used to live in Singapore for quite some time), at this moment, Pak Ein started to be funny in front of us, moreover, in front of the passerby! He asked hubby to take his picture, as if he was the British Master, talking to these people (yes, he spoke English) and tried to fight with the bull! Pfft! All of us, I mean, ALL OF US, had a “WHAT?” moment, so hubby quickly captured him on the act! Hahaha! 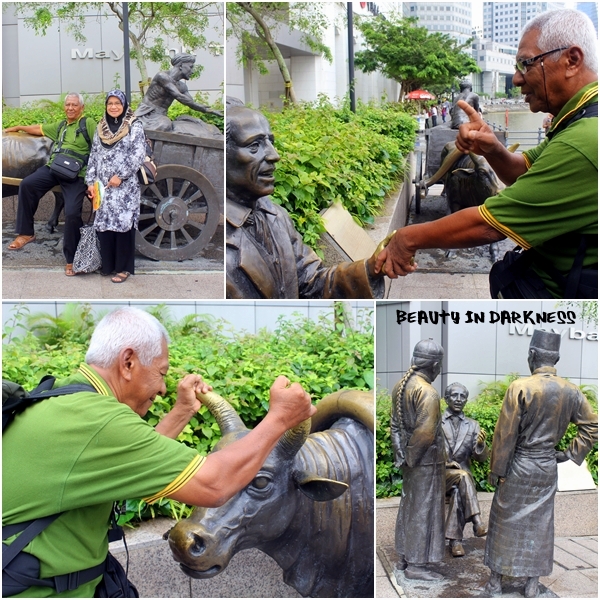 After got ourselves refreshed with bottles of drink, we walked further up, passing under one huge bridge, crossing one wide road, stepping down wooden stairs, where we finally reached the Merlion Park. Hubby and I had set to visit this place, for we had skipped it during our previous visit. We wanted to see the spouting Merlion! Hehehe. Plus, we wanted to see the world’s most expensive standalone casino, Marina Bay Sands. (Aduih, nama Marina, tapi casino plak! Berdosa nama mak!) 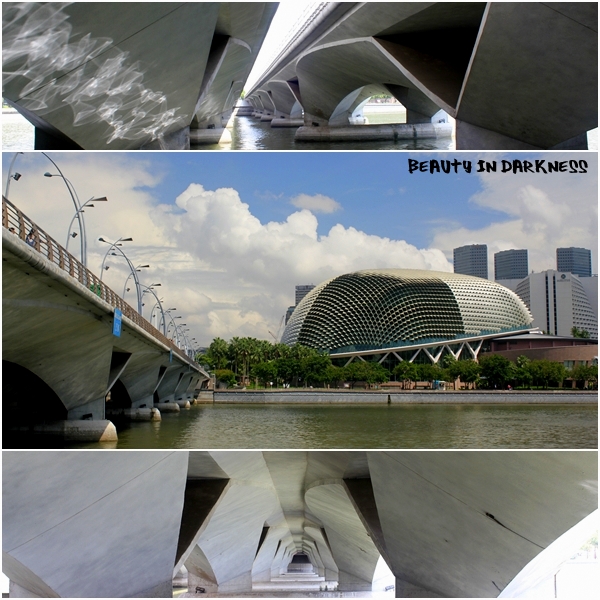 And we finally saw the mascot! 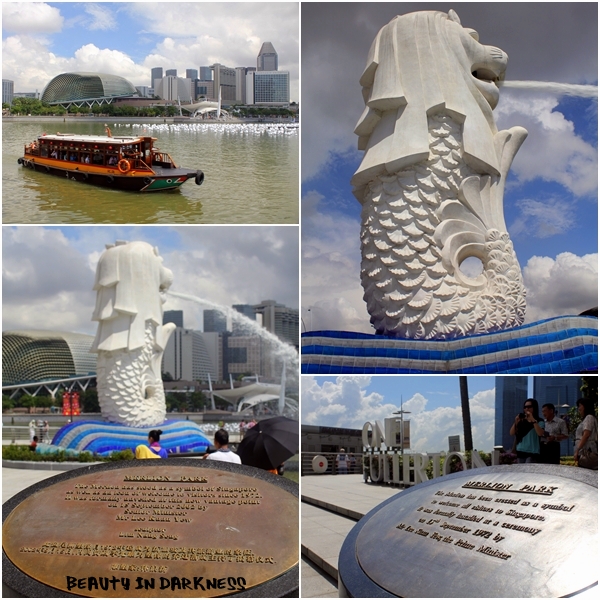 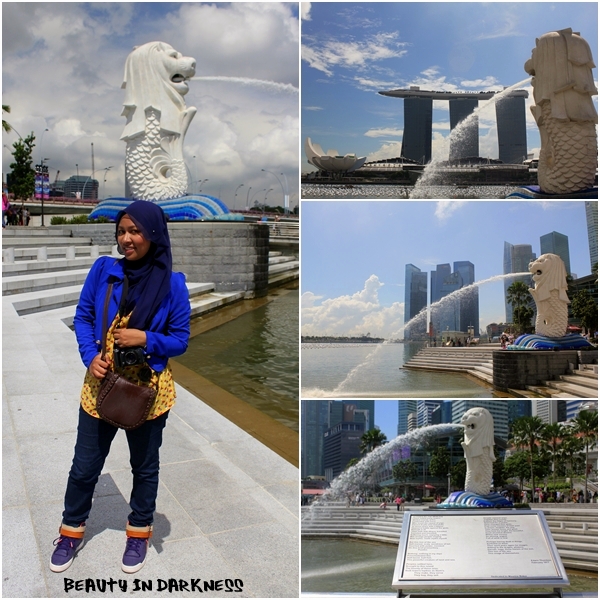 Aligned with this huge 8.6-metre Merlion, there was 2-metre Merlion cub behind the original statue. Both statues were as clean as white, and well-kept for tourist benefits.

“Do you know that Merlion exploded before?” Hubby pointed his DSLR and winked one of his eyes.

“Huh??” I didn’t know how to react. “How do you know?” I looked for any landmark stone nearby.

“It was struck by lightning on 2009.” And I was still searching for the history statement around the area.

From the same view, we moved the interest to the one and only, the most spectacular hotel, ehem, with my name on it. *Tepuk tangan* Well, my name always come ultimately luxurious. Hahaha! 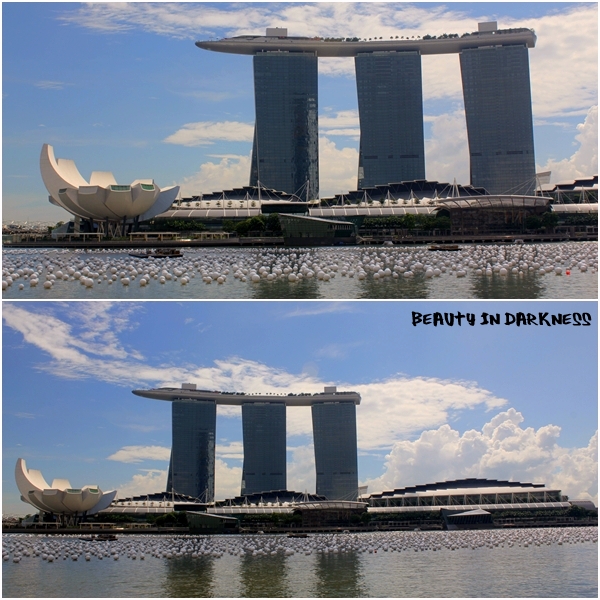 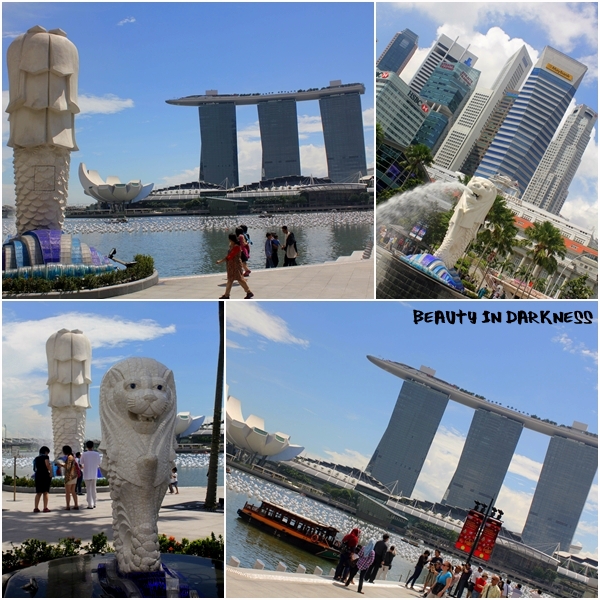 Looking straight to this hotel, knowing the price of the room to stay there, I should have never thought of it, at all. Once, Lily told us how to “cheat” to go up there, but I had to pass the trick, for I have half dozen family members with me. Hahaha! Kantoi kang malu jer. 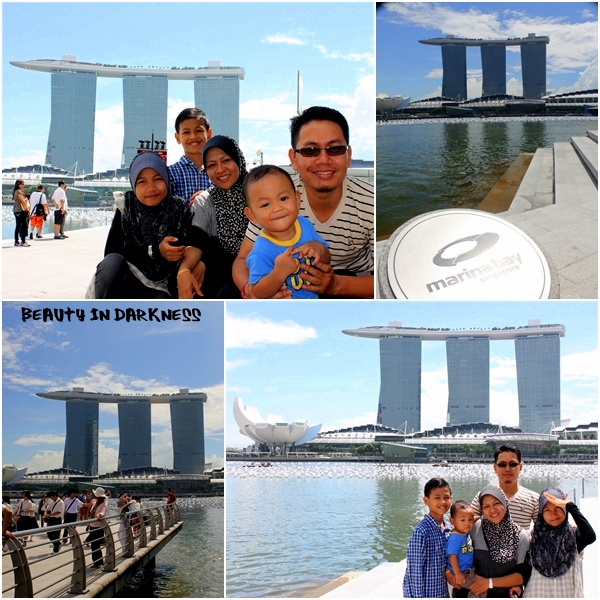 It was super hot and sunny day that we had to shelter ourselves under one small tree. Anak sedara aku dah macam orang dahaga air kat gurun Sahara dah! Hahaha! Then we remembered that we have had to have lunch. Ya Allah lapar gile ok! So hubby and I decided to eat somewhere nearby Mustafa Center, to ease our move after that. 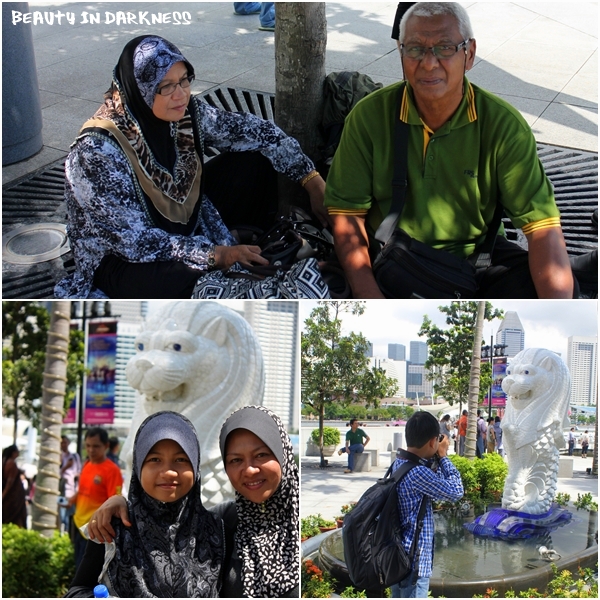 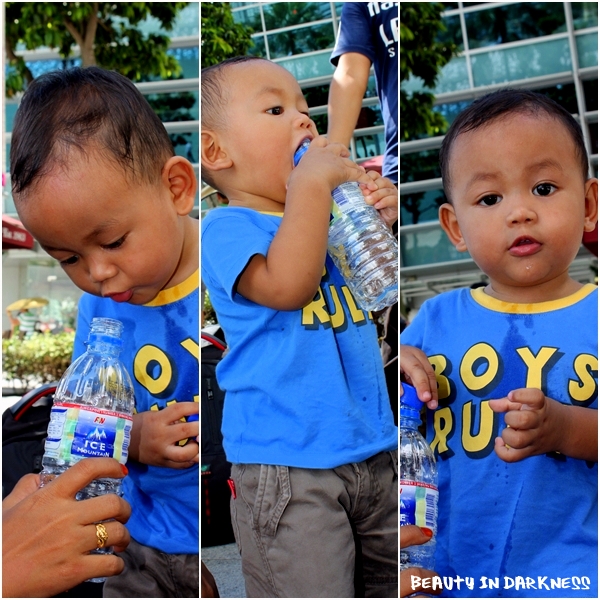 We took MRT and stopped at Mustafa Center, where we planned to leave our bags at the bag counter. Guess what? They asked us to bring in the bags! Gile hape? So we had no choice but to find a restaurant somewhere that area. I forgot the name of the restaurant but it is located just next to Mustafa Center, but I tell you, the food was delicious! It wasn’t that expensive coz they have few sets that you can choose. Later, we tried our luck to check-in the bags, and this time, we managed to! We entered Mustafa Center and walked straight to the perfume section. Well, that was my intention, once I decided to re-visit this shopping center. It was worth it, for each of us bought 3 bottles each. We then took our bags, took two cabs, and headed to the bus terminal. From there, we had undergone the same process with immigration and bus changing, before we finally reached Larkin Terminal. 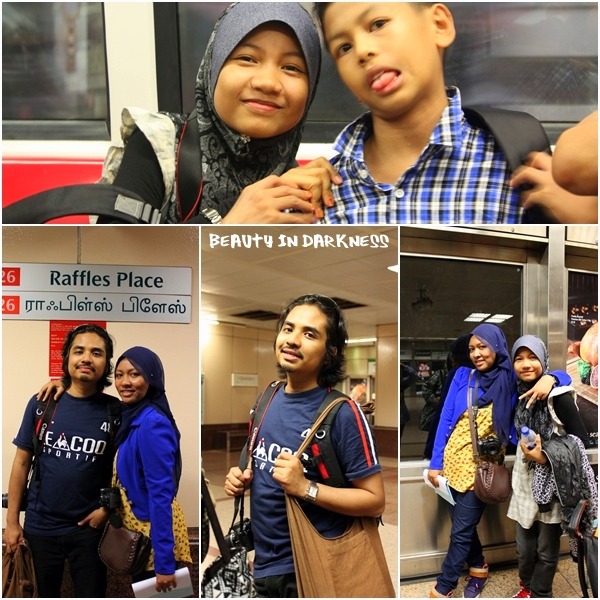 “Eh, kacang pool nak?” Hubby reminded all of us on the next plan.


While I asked around where the heaven was this place, Kak Ngah tried to google it. We finally found that this place is located at Bomba Larkin Food Court (macam kedai RnR), the one and only Kacang Pool Haji. Aside from this noted dish, they also sell roti bakar, rojak buah, tauhu bakar and nasi lemak. My verdict on kacang pool? SUMPAH SEDAP! Similar to Sup Tulang Merah, this food is served with bread, kira makan cicah. Uihhhh sedap sangat! 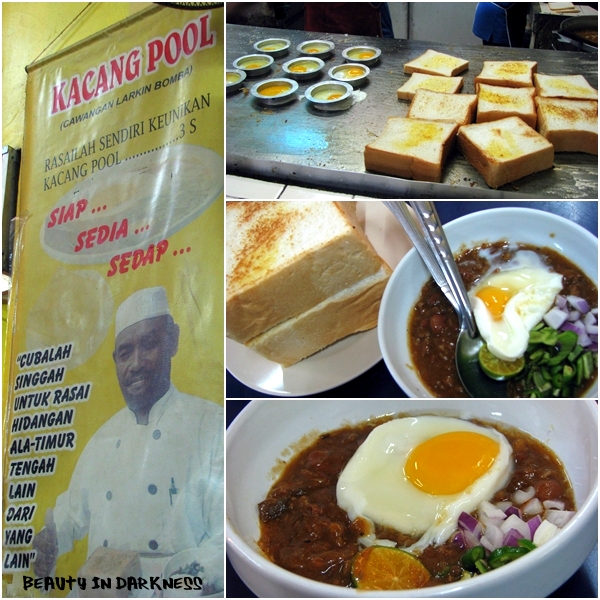 Once finished, we drove to the JSL Hotel at Taman Johor Jaya, and checked in. The story of this hotel can be read here. We called off the night, after we had quite a good dinner at Selera Senibong Seafood. And that ended my Singapore Family Trip! 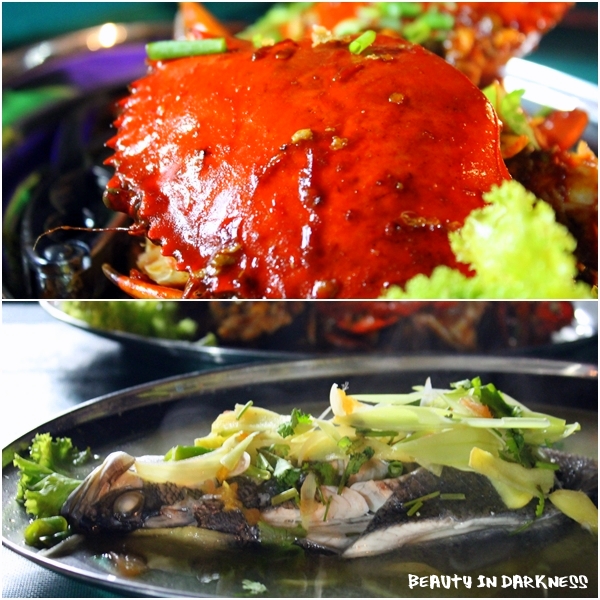 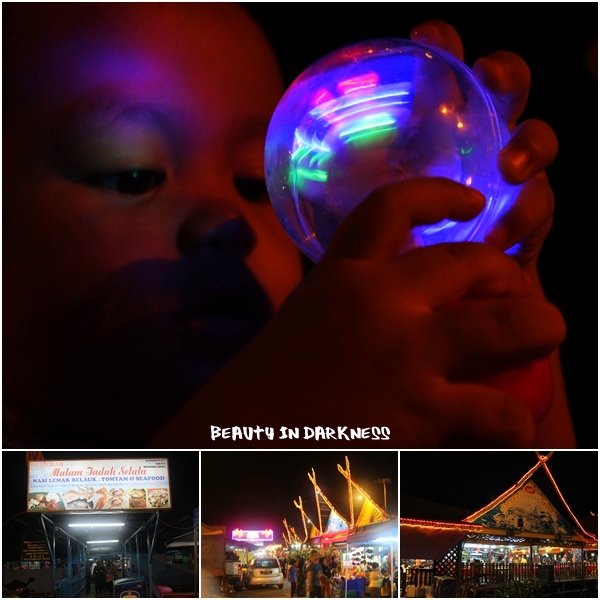 Unbuttoned by Biqque at 1:13 PM

On behalf of the National Library Board (NLB), we would like to invite you to pledge your blog to the Singapore Memory Project as part of efforts to collect memories that are already manifested in existing online channels.

The Singapore Memory Project (SMP) is a national initiative to collect, preserve and provide access to Singapore’s knowledge materials. Spearheaded by NLB, the SMP aims to build a national collection of content in diverse formats (including print, audio and video), to preserve them in digital form, and make them available for discovery and research.

By pledging your blog to SMP, you are affirming that every memory matters. Whether your posts are an account of your daily life, or an expression of your thoughts, the SMP hopes to find a home for your memories so that it can help build towards an understanding of Singapore. You will also receive a badge that you can display on your blog in recognition of your contributions.

Contributors to this blog pledging initiative will be listed on Singapore Memory portal’s blog pledging webpage. All blogs pledged to SMP will archived using NLB’s web harvesting software, in addition to images of each blog’s landing page.

If you are keen to pledge your blog to SMP, simply fill up our response form at this following URL: http://singaporememory.simulation.com.sg/Public/Pledge.

You may find out more about this initiative at http://www.iremember.sg/?page_id=2822.

We are looking forward to your contribution.

gosshhh..never been there, but since dlm banyak2 post ttg singapore which is other than USS.. tis one attract me much!! Thx Mrs Biqque!