The first open area that we walked to, was the Lake Of Dream, where they had beautiful decorative artworks like hanging candies, colorful balls, dragons, and a nude statue named The Thinker, by Auguste Rodin. 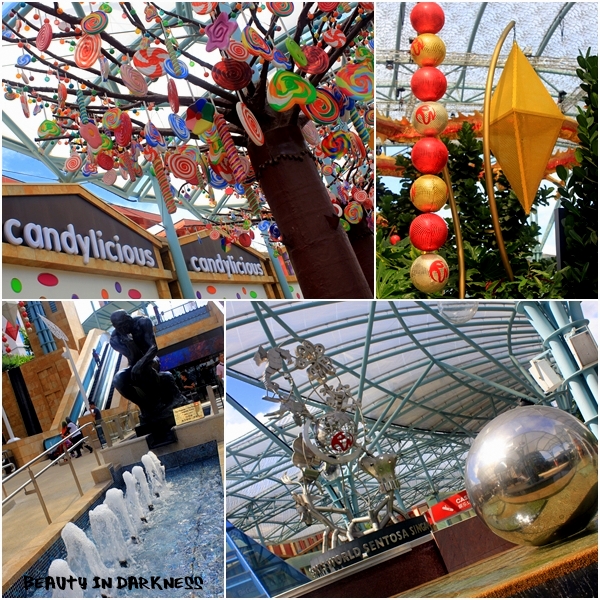 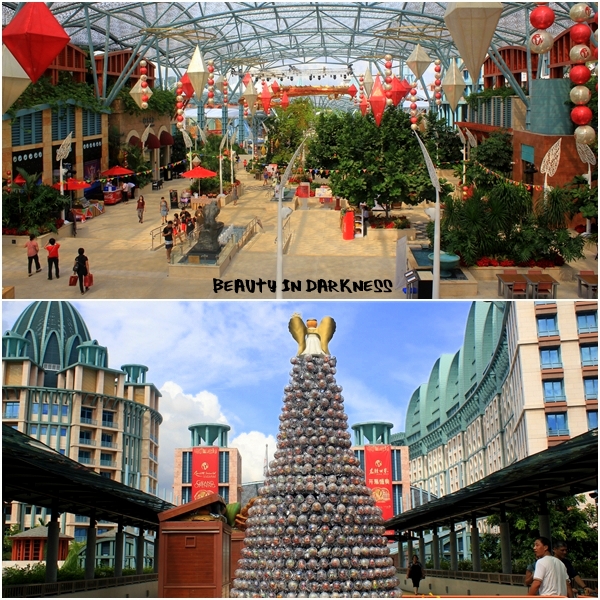 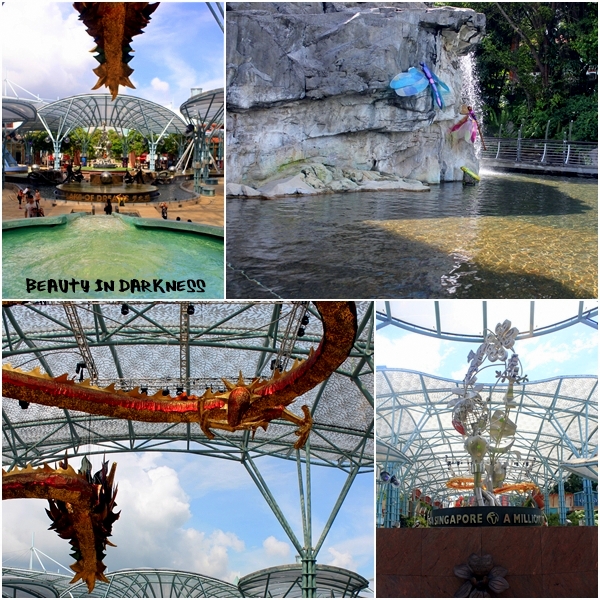 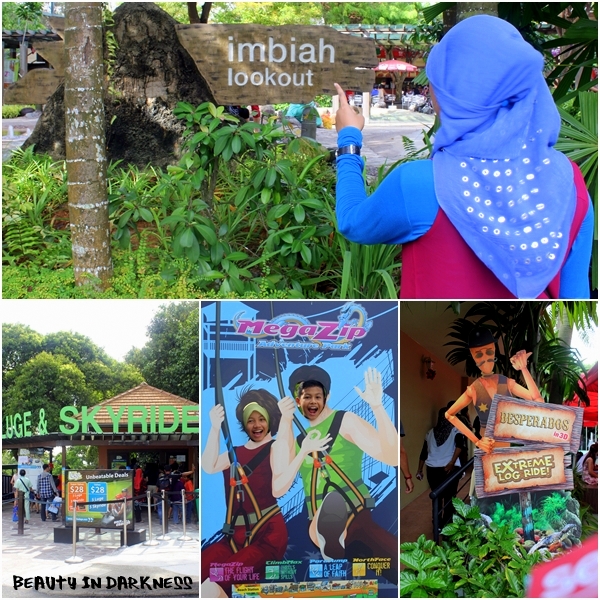 At Imbiah Lookout, we chose to enter the Merlion, since we passed this attraction during our previous visit. Meanwhile, the rest waited at the ground area. Our main concern on entering this famous 37-metre tall Merlion, was to be in its mouth, and on top of its head. 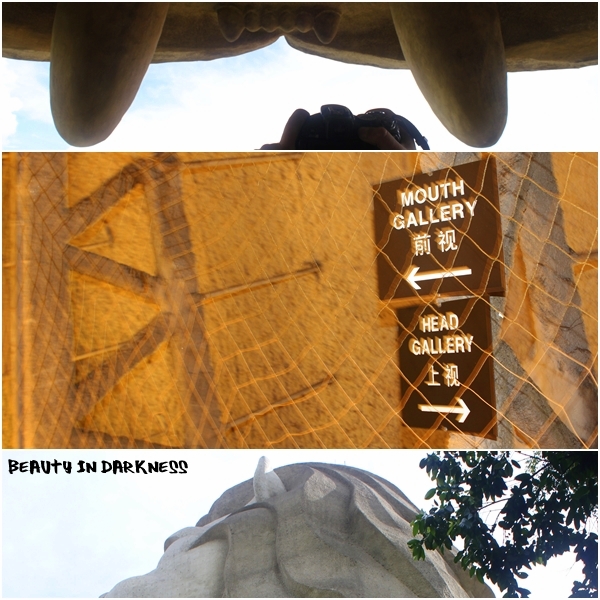 We paid SGD8 and entered the hallway, where we were transported into the depth of blue oceans, before meeting the legendary sea dragons and mythical mermaids. At the end of the walkway, there was one door before us, with Merlion Show timing stated on top of it. 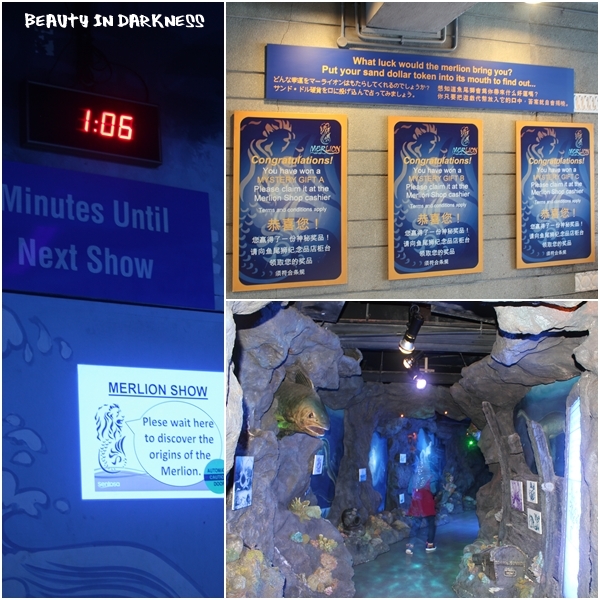 We then entered the room and sat right before one big screen, where the history of Singapore icon, The Merlion, half-lion and half-fish, is told. The show was cartoonlike and animated, pretty exciting and simple for kids to understand. 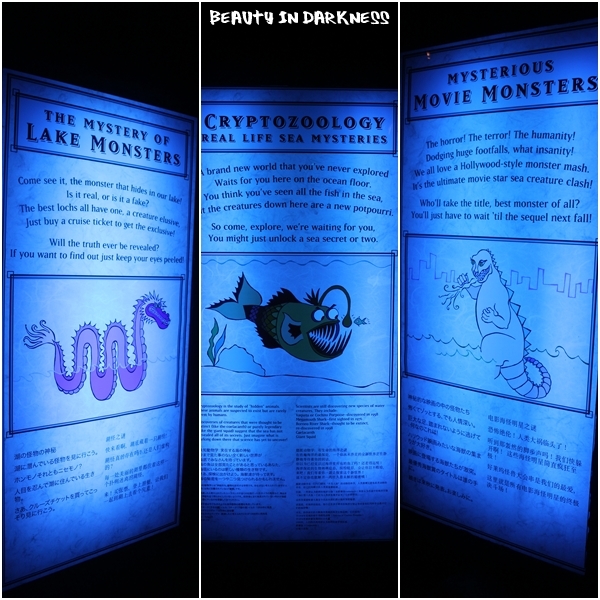 The show ended in not more than half hour, and we proceeded to the head gallery first. Owh, don’t worry, there’s an elevator! U just need to walk-up only for few stairs. On top of the Merlion head, hubby had his ultimate fun capturing 360 degree of Sentosa Island. Meanwhile, I settled with video-making. 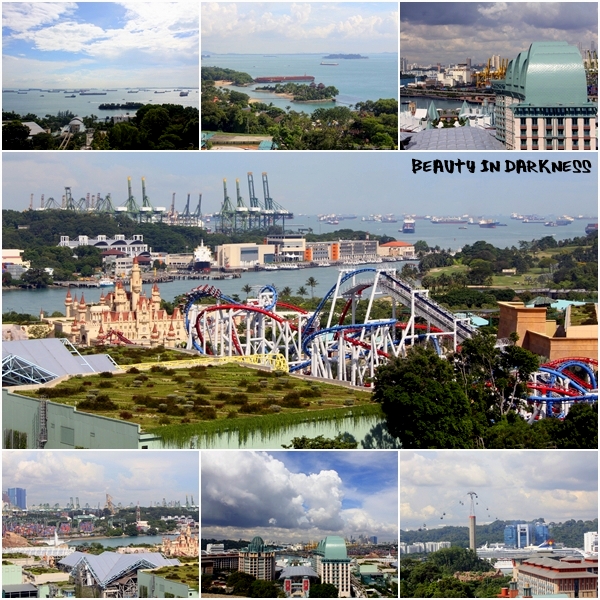 It was hot and sunny day, with thick clouds. Once there were other visitors on the Merlion head, we went down to the Merlion mouth. Lagi ramai orang! Berebut-rebut nak pegang gigi Merlion tuh! Hahaha! The organizer has one photographer, stood right before the mouth, capturing each and every visitor who went posed at it. We did too, but we didn’t buy it lah. Apa guna ada camera bang? Hehehe! Earlier, we were given two gold coins (in the form of tokens) to be put into 3 Merlion mouths. Each Merlion will give you different luck and gift. I forgot which mouth that I put in but we received a paper fan (each) from the counter, on our way out. Hahaha! 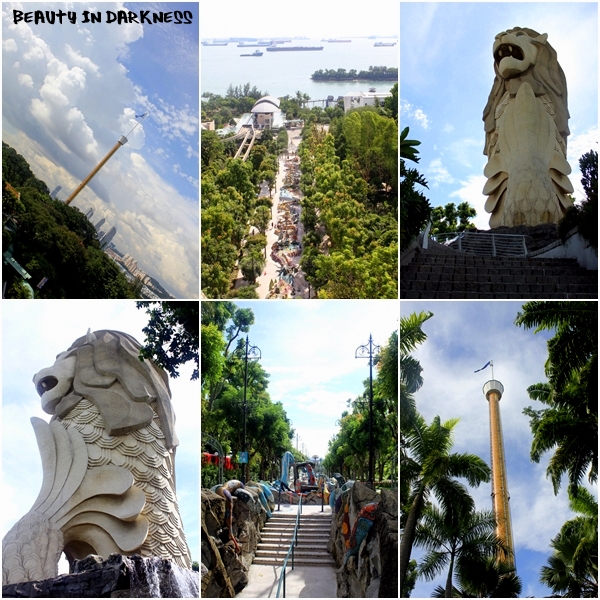 Later, we came down and met the rest, who were lepaking next to the toilet. Kilfie did his business and Kak Ngah had to bring him for a quick shower, since it was too hot. We continued the exploration and passed by the Images of Singapore. Hubby wanted to enter the gallery coz he loves taking photo of now and then of particular places, but we had to pass the offer, for we wanted to experience the better. 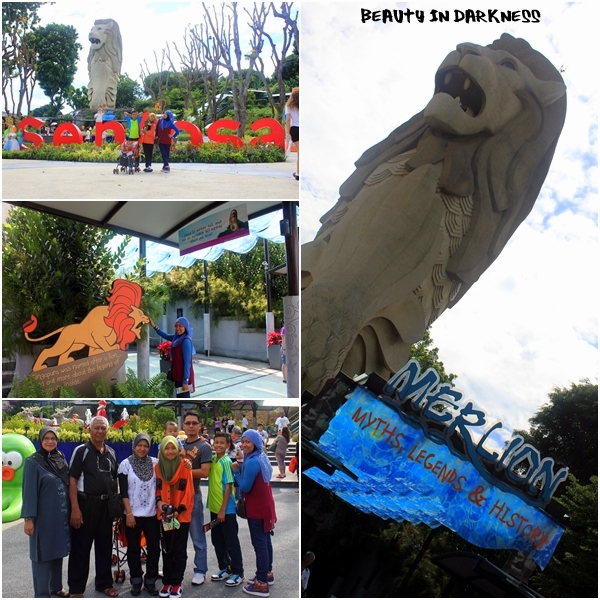 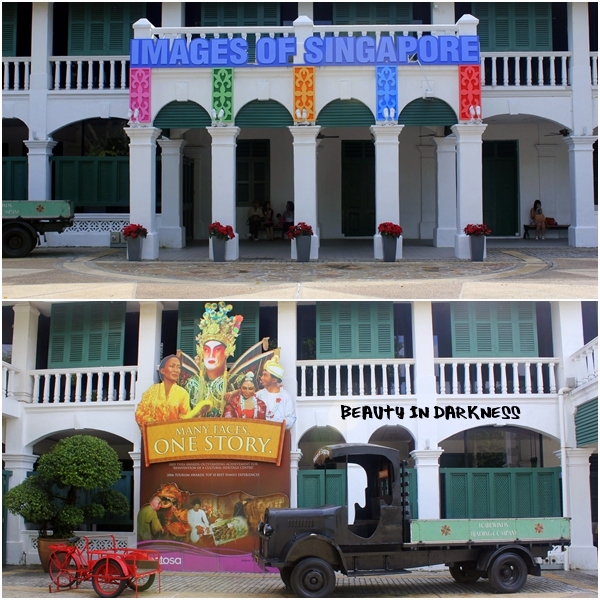 The Adventure Park! Here, we opted for Adventure Combo (save us a lot) where we need to choose two attractions (Desperados and Extreme Log Ride) with the price of SGD28.90 each. It was only for all of us except for Pak Ein and his wife, for he said he might have heart attack in the log ride. Walhal takde pun heart attack. Hahaha!


First, Desperados in 3D! A virtual shout-out-ride-on-motion-based saddles! This was where Pak Ein and his wife really had a blast! Besides hubby and I, Pak Ein’s wife also one of the sharp shooters! Hahahaha! It was an easy ride, with one hand holding a laser gun, while the other hand MUST hold the saddle. Else, you won’t have a better aim on the bandits and barrels, on this bumpy ride. 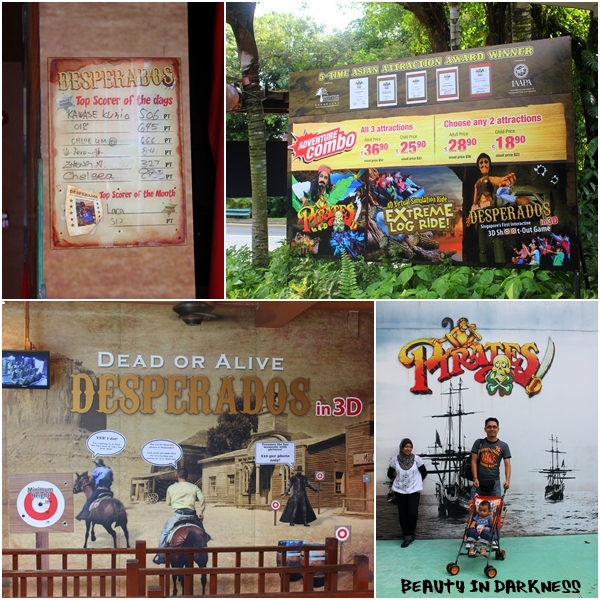 My whole family actually needed to give a way to other visitors, since we wanted the whole frontline to be occupied by us. Plus, kids and old folks are allowed! Kak Ngah actually put Kilfie right in front of her, and all we heard was our non-stop laugh of who was better, who was funnier, THE WHOLE TIME.

We then continued the adventure by getting into the hall of Sentosa Cineblast (Extreme Log Ride), where we were seated in one spaceship (no, it's not a log), with 4D spectacles. The ride was actually similar to whitewater rafting over the mountains with thrill of rushing into deepest valley that full of chain saw and alligators. So those who cannot tahan, will definitely feel the motion sickness. Guess who? IT WAS ABANG NGAH, who looked down THE WHOLE TIME. Hahaha! Rugi bayar. Kilfie was left outside with Pak Ein and his wife, while my niece and nephew, Kak Ngah and I, did enjoy the ride, shouting and cursing the big screen.

This is about travel n vacation, travel-singapore-sentosa