The journey from Hoi An to Danang took about 40 minutes with suburbs view that offered rows of marble hills on the left, and long beaches on the right. We were then surprised with one huge and high cylinder glass structure attached to one of the hill that we suspected as the famous Marble Mountain. 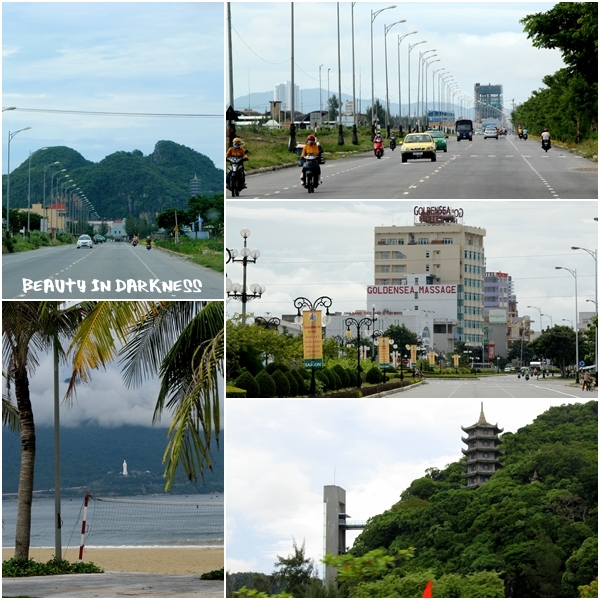 “Ok, that’s new…even we don’t have it back in our country huh…?” I was completely astonished.

In a minute, “Eh, does the driver knows how to get to our hotel or not?”

We saw him looking for directions and signboards, trying his best to locate Loseby Street, where Pearl Sea Hotel is located. We actually showed him the map and literally directed him to the right road. Thanks to hubby and Dan Arif who quickly spotted the 7-storey buildings from far, where other hotels were also located at this district.

This affordable hotel is just few minutes away from My Khe Beach and 7 minutes drive from Danang International Airport. Complete with normal facilities, it also offers bike rental and tour desk.

After smooth check-in, we told the reception to provide us 3 motorbikes with auto transmission, for a cheaper price. After quick negotiation, we rented each bike for 160,000VND=RM16 per day. We then proceeded to the room to refresh ourselves before the real exploration started. 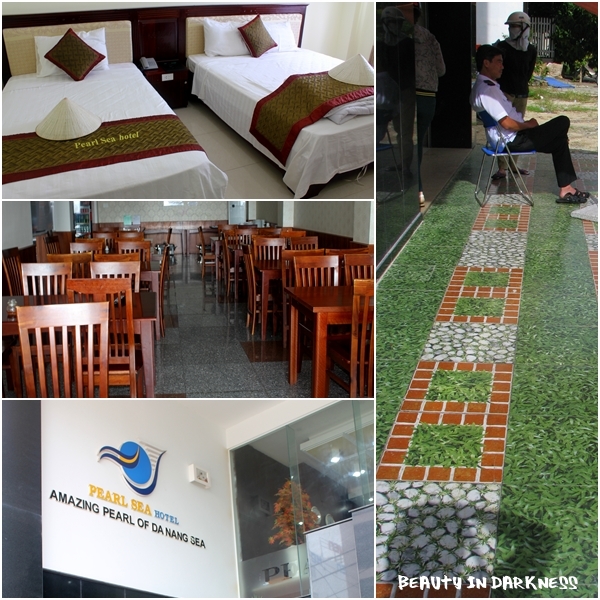 Beforehand, I requested for a higher floor rooms, for hubby wanted to have a better view of the beaches. Luck was on our side where our rooms (Pak Ein and us) were located at the roof top, where we had a special access to the roof area where they have 360 degree aerial view of its surrounding. 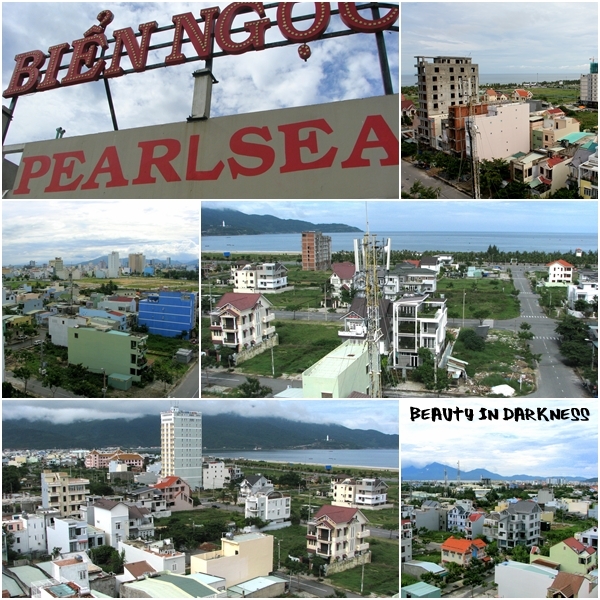 An hour later, we went down and tested the 3 bikes. All seemed nice and ok, so we went for fuel-up at one shop, located just right in front of the hotel. Easy huh! Dan Arif later put on his Go-Pro tiny camera, to record our amazing journey. 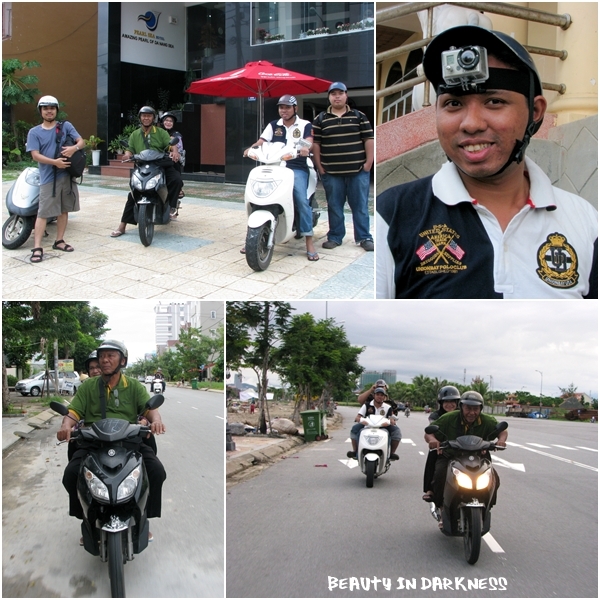 Of all 3 bikes, Pak Ein got the fastest bike! Ours were cute but the fuel meter seemed didn’t stay at the correct level. So we just refer to the other two bikes. Dan Arif led the road to the beach where we questioned ourselves on where to park the bikes. There were “no parking” signs along the main road and there were no parking lots available either.

Suddenly we saw few bikes parked on the pedestrian and we thought of doing that as well. But worried of getting tickets, we decided to find a legal parking area. Then there was one local guy who was waving to us, directing us to enter his compound. Glad that it was a legal parking where we paid for 5000VND for each bike. Cheap! 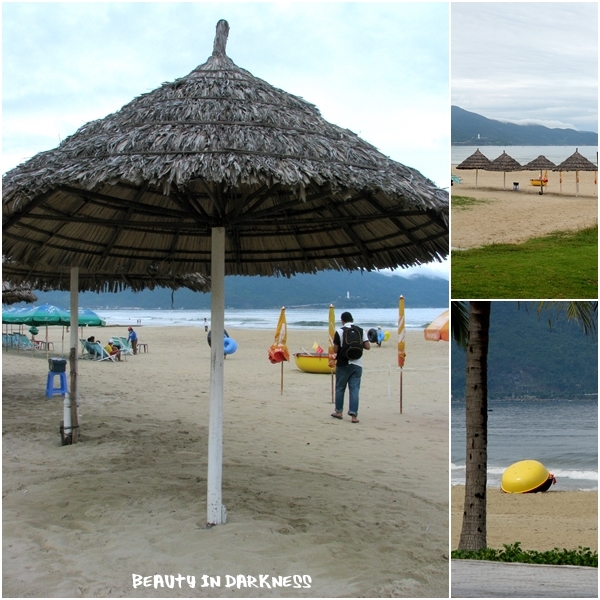 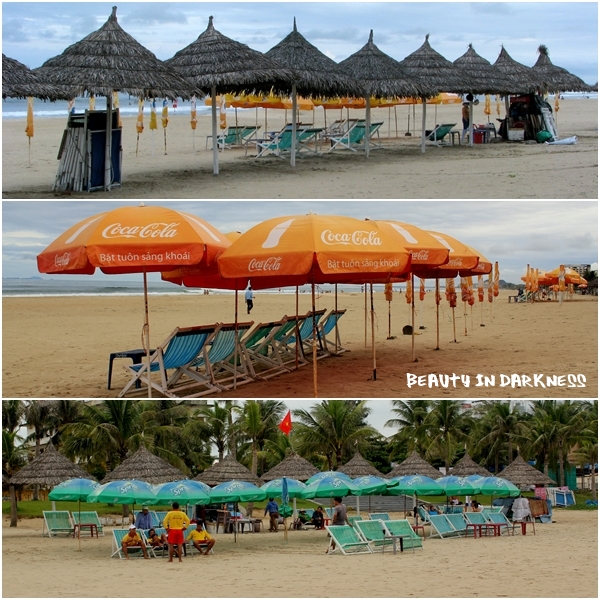 We crossed the main road and walked towards the beach. Though the beach wasn’t that crystal clear neither blue in color, I can say that it was beautiful. Looking at the strong current and big wave, with yellow and red flags and beach patrol, it resembled Surfer’s Paradise at Gold Coast. The only thing that differed was the boat! This round boat is called coracles and it is made by bamboo, with some sort of waterproofing material. So cute, I even can’t help myself to pose with it! 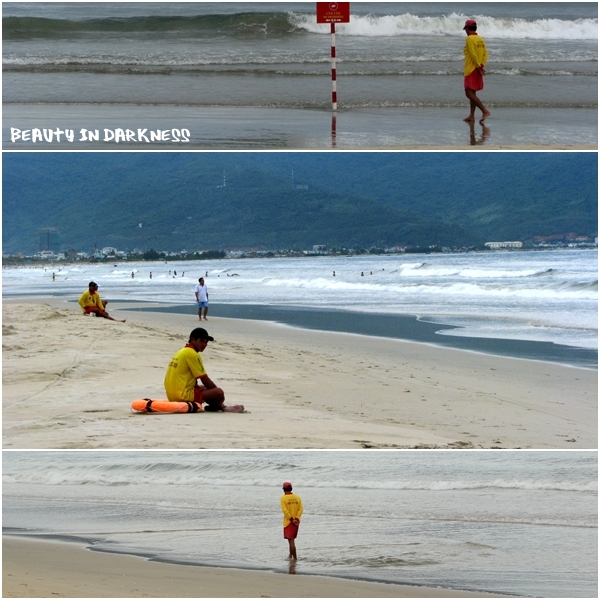 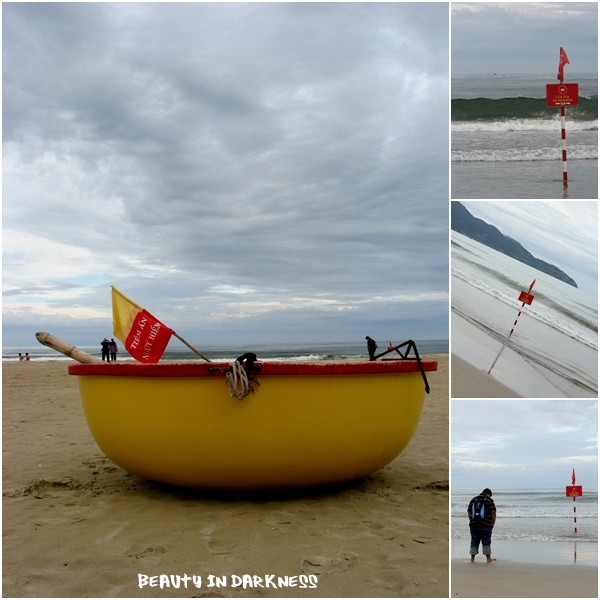 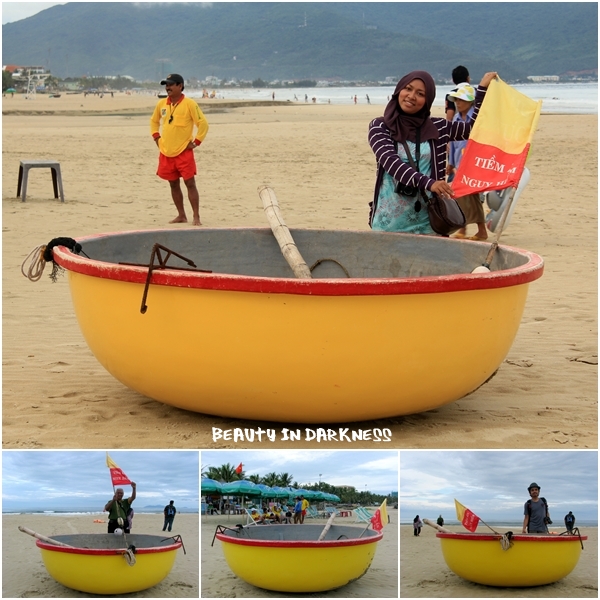 “Let’s send a message to #TravelholicAwesome!” Both, Dan Arif and I suggested and agreed! 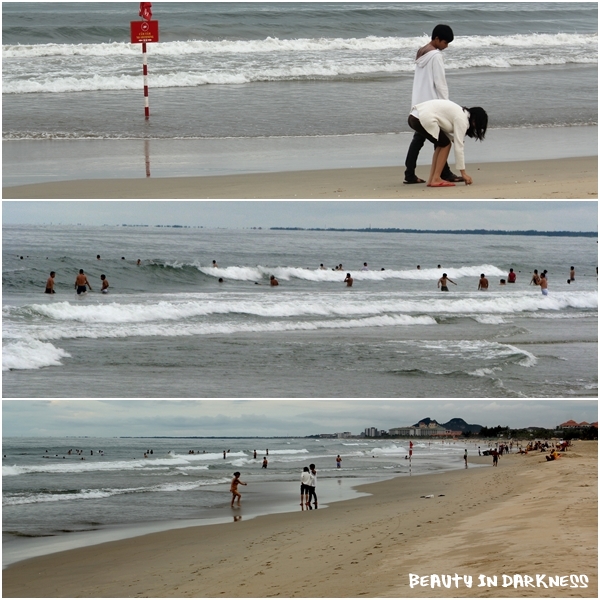 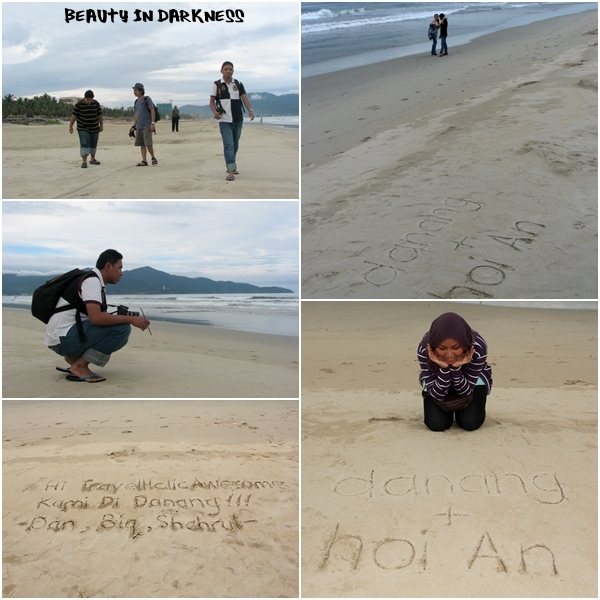 Did you guys get our message??? Bot bulat tu tolong hantar. (Hik!)

We left the clean and well-kept beach and rode to the west of Son Tra Peninsula, where Kuanyin statue, Buddha’s goddess of mercy stands tall on the tip. This statue can be clearly seen from all area, since it is tall and isolated. 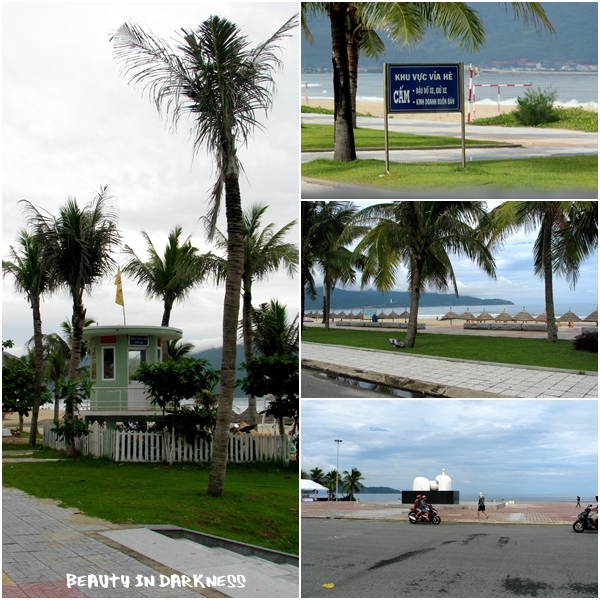 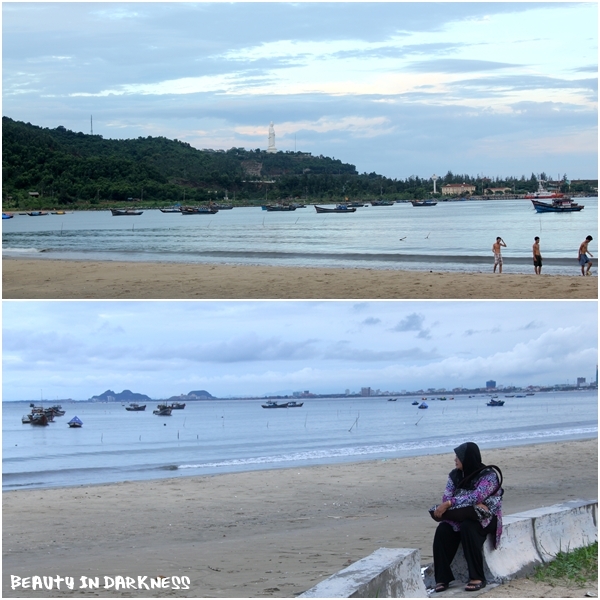 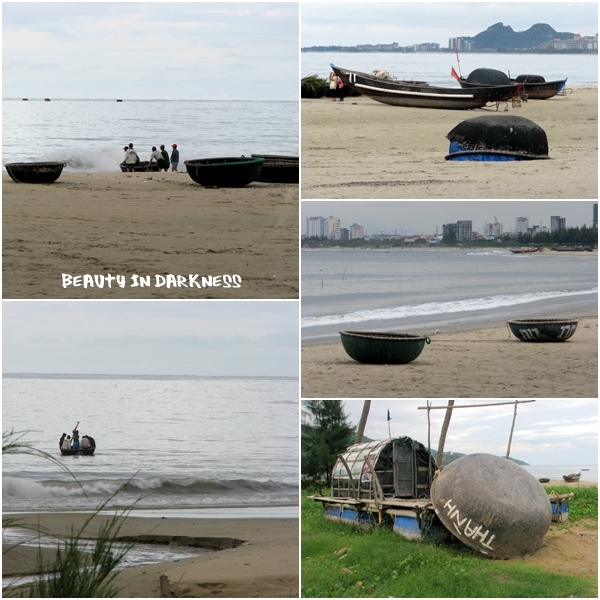 It was nearly dark but we still rode towards the location of the statue. I remembered we stopped twice to enjoy the coastal view, which was superb and spectacular, IF it was still sunny. More traditional coracles found along the beach, some were left unused. During the joyride, I once, recorded a local young lady on the bike, with sheer white “ao dai” who later waved at me, after noticing her being recorded. Sweet! 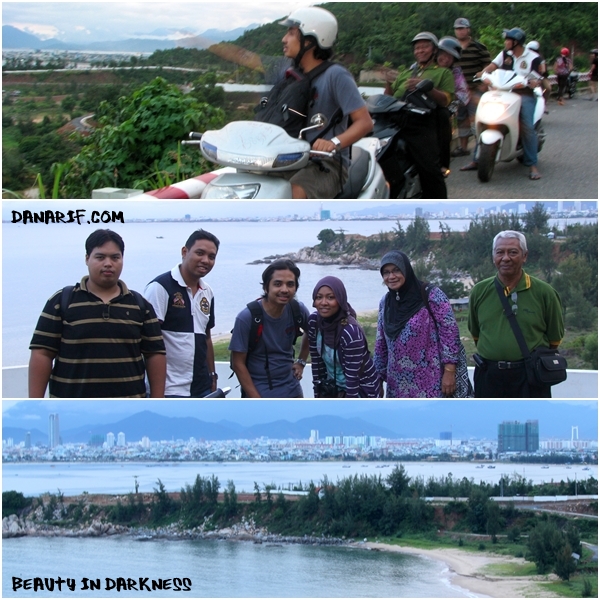 The road lights were already turned on, means it was already dark. We decided to call off the visit to Kuanyin, turned back, and rode down the road, heading to the town. Town was actually quite far from our hotel where we had to cross one big colorful bridge called, Song Han Bridge. 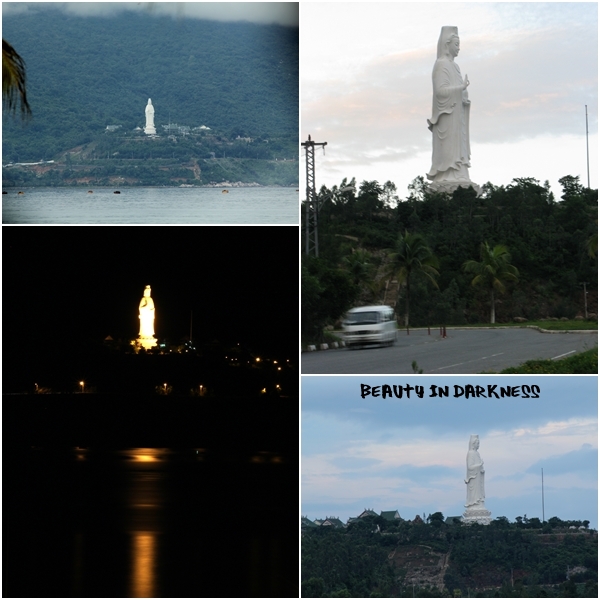 This bridge is fully equipped with colorful neon that changed numerous times all night long. The colors had really mesmerized us, thus, we stopped by the Han River to capture those wonderful moment. We ended the night by going to Big C, to buy packs of instant noodles, bread and tuna, for tomorrow. 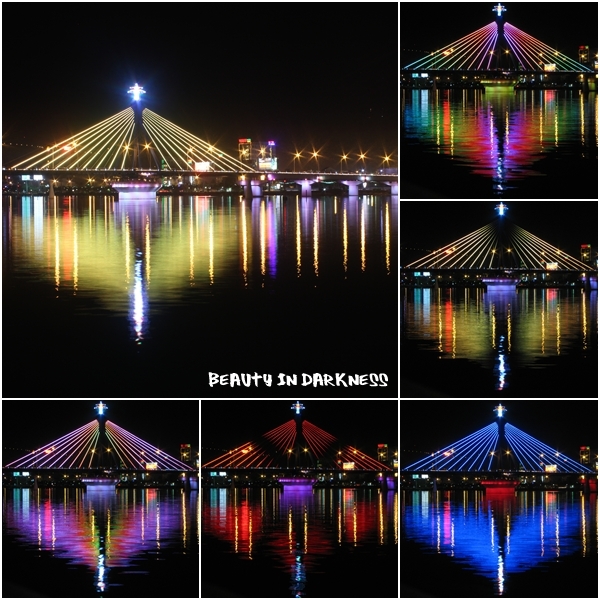 One of the photo of the beach looks exactly like AirAsia photo when they were promoting to launch their route to Danang.
The last photo are so colourful and mesmerizing.

diana, which one? i guess semua gambar will look the same since nothing much u can expect from there :) tx!