“Wait, I think we might need another motorbike for Aqram.” Said Dan Ariff.

We got Aqram a bike and re-fueled for all our bikes at the shop opposite our hotel. Pak Ein quickly advised Arqam to follow our tempo, scared that he might lose in Danang’s busy traffic. As usual, we enjoyed the ride and smiled to each other whenever we overtook others.

Our next destination was Marble Mountain, the one that we saw on the way from Hoi An to Danang, yesterday. It is called Non Nuoc or Ngu Hanh Son, popularly known as Five Elements Mountains. It is named after ancient philosophy that are metal, wood, water, fire and earth. 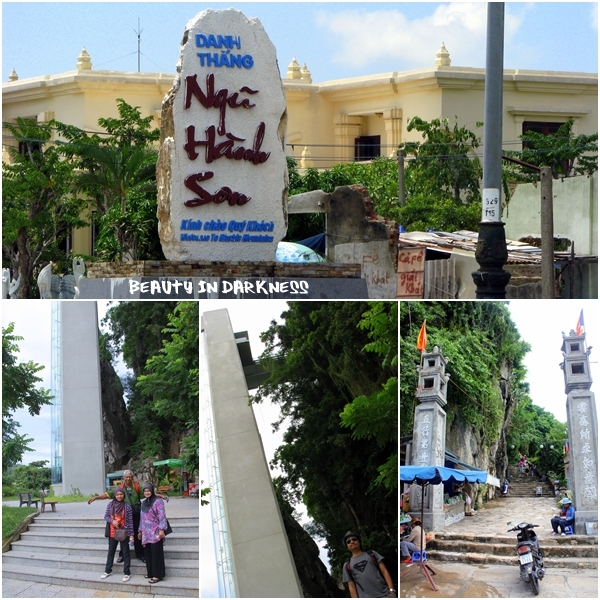 Thanks to yesterday (where we saw the signage) that actually ease our journey in finding the entrance. The road wasn’t that good that we had to carefully ride onto, about few hundred meters inside. We then stopped at one souvenir shop and parked under the covered parking spot (VND5000 each), more likely someone’s house or carving store.

“Hmm…bracelet!” Pak Ein’s wife started to get crazy, looking at those jade and marble-made bracelets.

“Makcik, no…no…” I grabbed her hand and walked towards the ticket booth.

We stopped for a while to discuss, whether to go up by lift or climb on foot. Dan Arif looked at Arqam and quickly surrendered. So did the rest of us. Well, what’s wrong taking the elevator, right? We don’t have this in Malaysia…hahaha hmmm… *panicked* 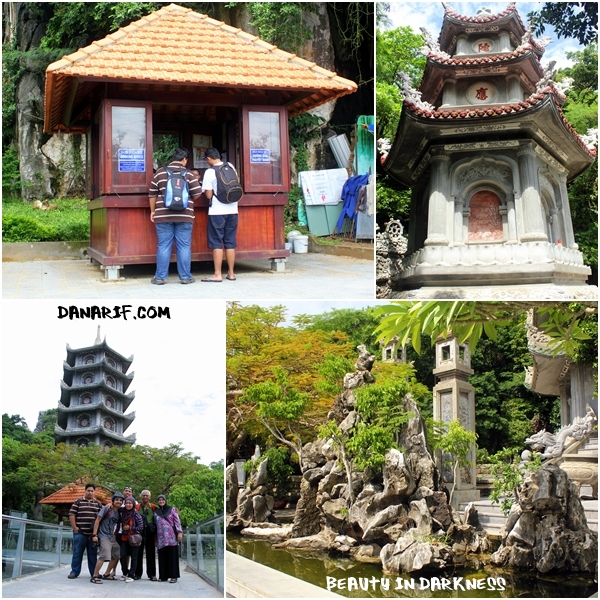 “How many?” The ticket officer asked me with slight Viet slang.

On the right hand side, we saw steps heading to the peak. We walked to the lift door, where someone welcomed us into the not-so-clean-see-thru lift. The lift stopped nowhere except the top platform of Thuy Son mountain (highest peak and the only accessible among the five mountains) near Xa Loi tower.

The tower is 5-tier tower that has two marble dragons sitting at both sides. Pak Ein and I started to play fun with them while Dan Arif captured us on camera. Hubby? Played Nat Geo’s photographer, maybe. 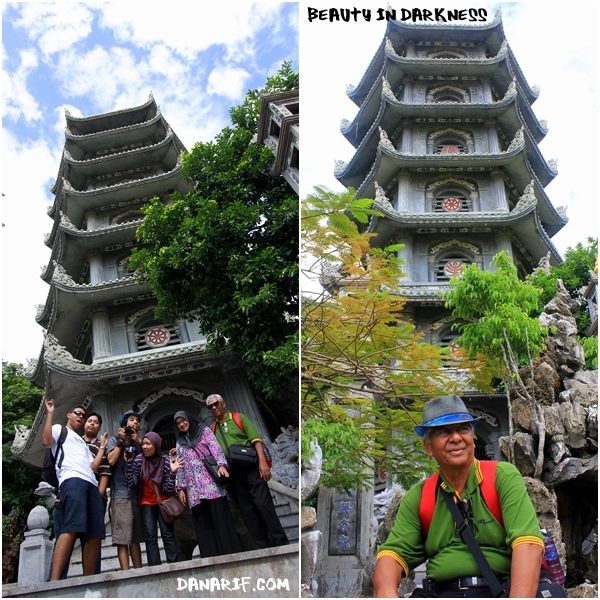 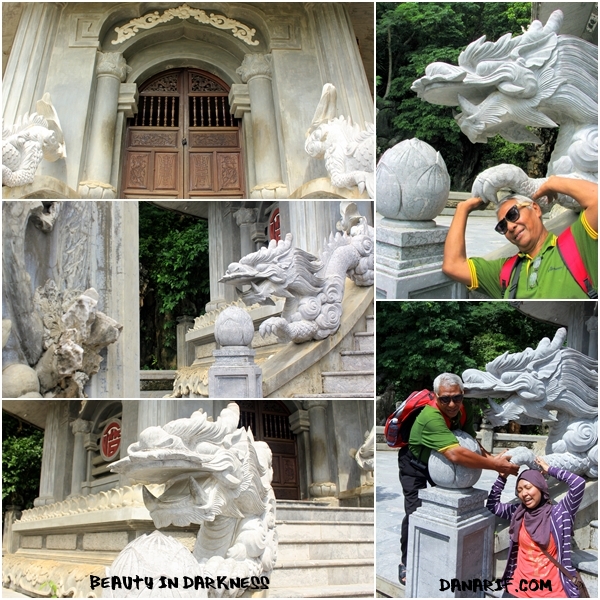 After a while, we continued walking between the two caves, where visitors can stop to enjoy coconut drink. Aqram, Pak Ein and his wife looked for a place to sit, while waiting for Dan Arif, who finally decided to follow us into the cave. 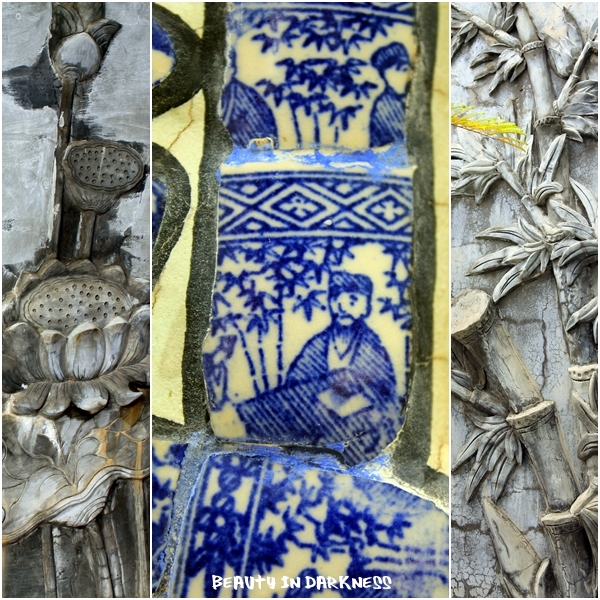 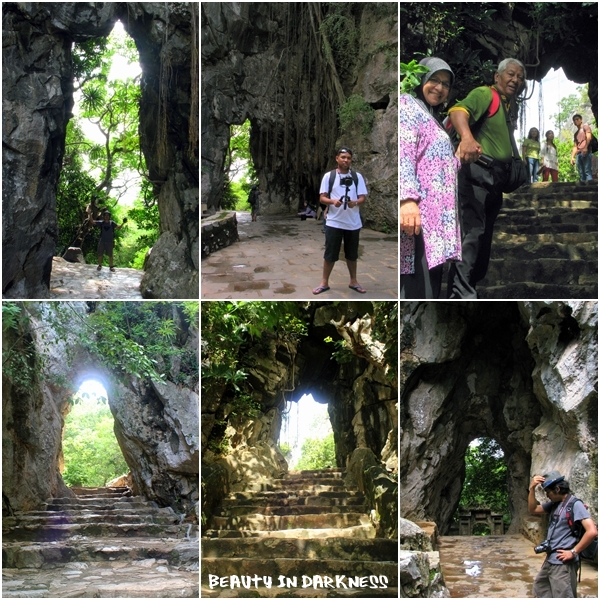 The Van Thong cave entrance was really small and slippery. Despite the shallowness and darkness, I still saw few locals in heels and skirts! Hahaha! Inside the cave, there was one little Buddha in yellow wrap, sitting in the middle of the pathway. We passed by and walked straight up, climbed those super steep steps into another opening. Dan Arif and I started to play Tom Jones and Lara Croft, climb-posing the cave wall, with minimal lights from above. 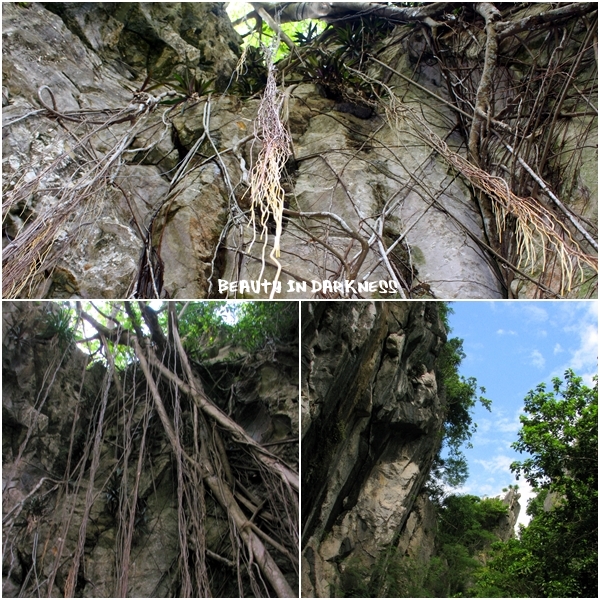 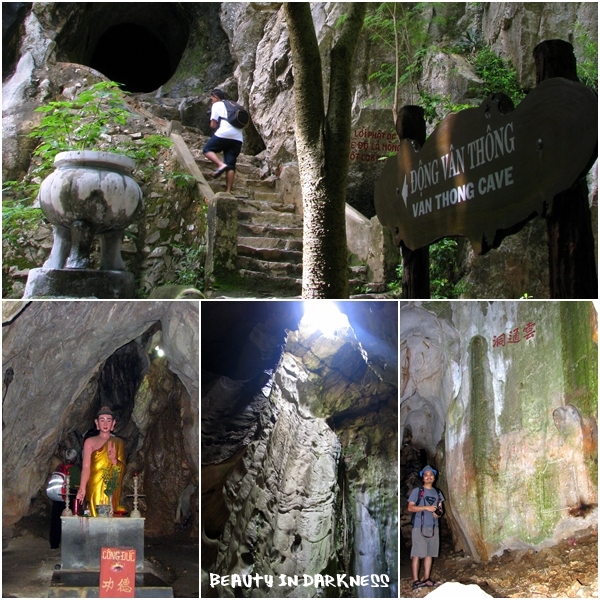 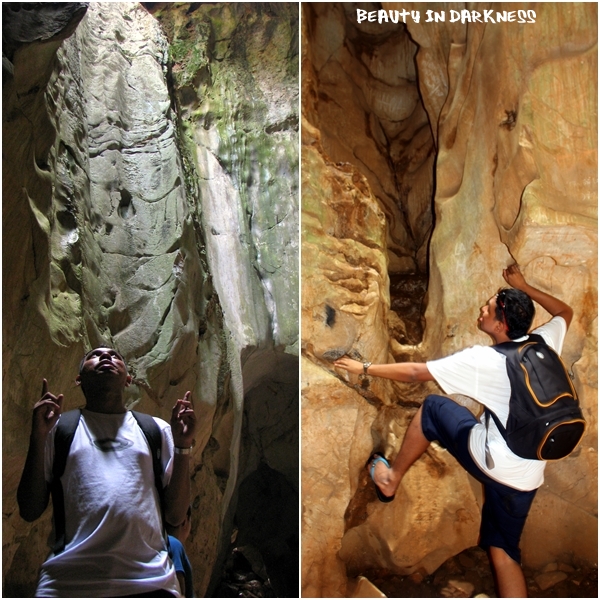 Satisfied with the exploration, we climbed down and walked out from the cave. Dan Arif, Hubby and I decided to prolong the exploration to the other site where they kept the sitting Buddha that facing the sea. 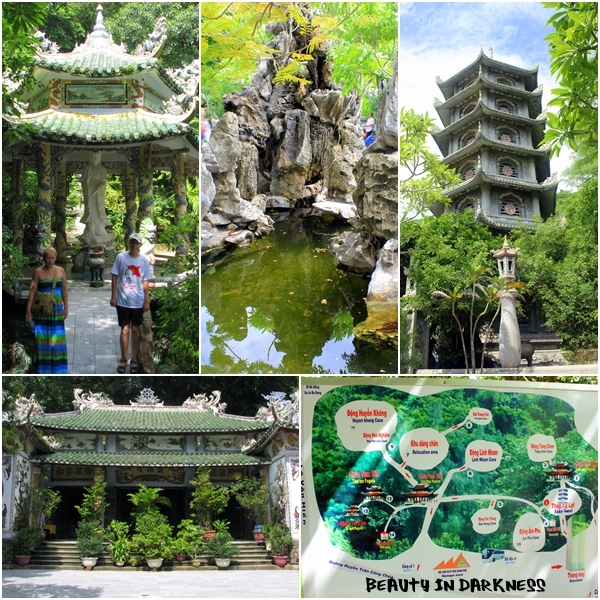 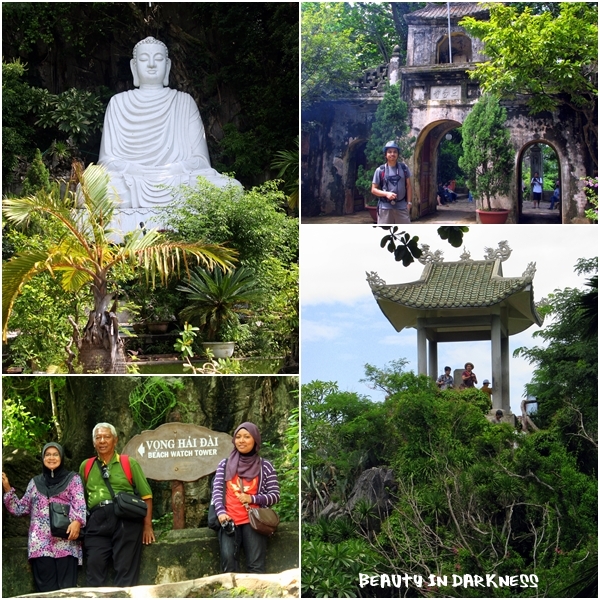 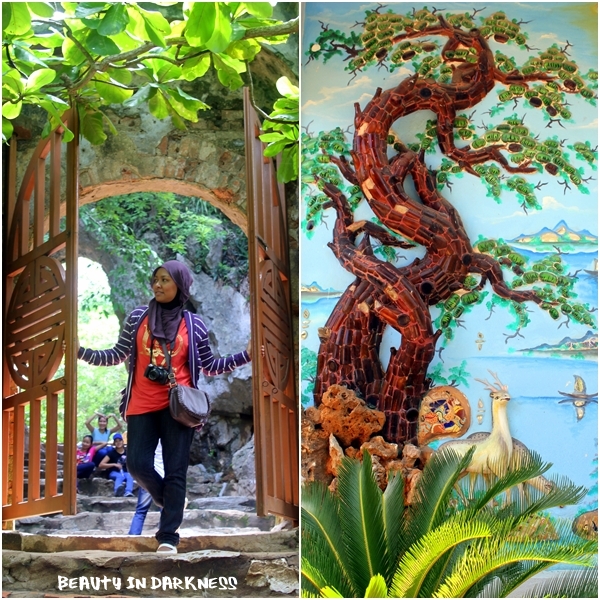 Next to this place, there was the highest viewpoint called Vong Giang Dai. With full forced, Dan Arif, Hubby and I climbed the watchtower. 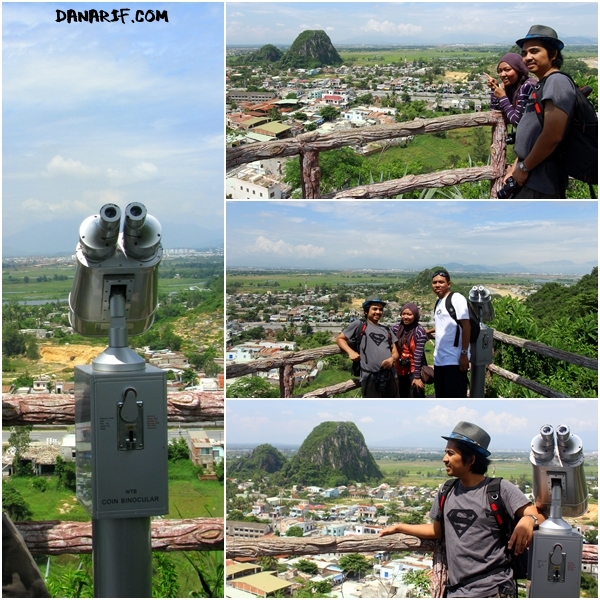 “Oh my Goddddd! This place looks like Ipoh laaaaaaaaaaaa!” I shouted and hubby agreed. 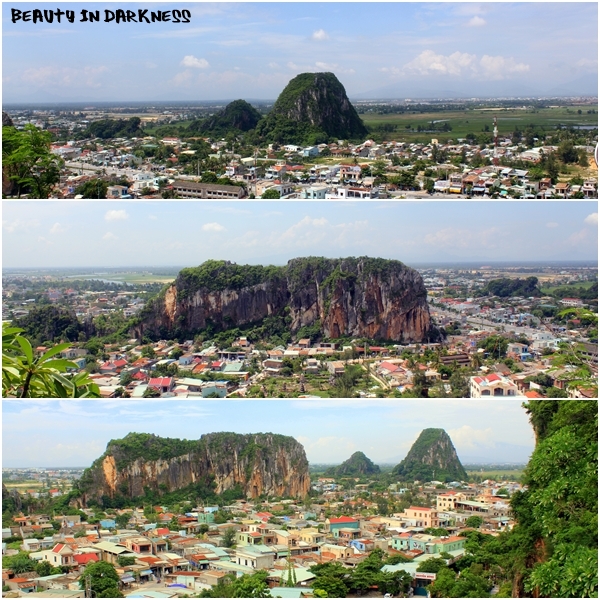 The marble mountains, scattered low-rise buildings, green hill tops, under the hot sun, it did remind us of Ipoh. The scenery was breathtaking so we grabbed the chance to snap more pictures up there, before we turned back to the other three members.

With flowing sweats that wet our clothes, we again, took an elevator down the hill, with VND15,000 each. Weh, cannot tahan laaaaaaaa…156 steps kottttt… 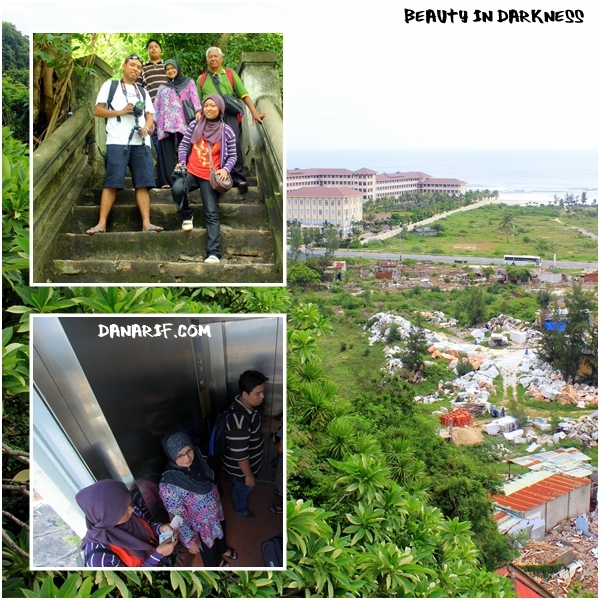 Unbuttoned by Biqque at 5:16 PM