The rain subsided with minor drizzled. We rang Dan Arif's room, met them downstairs, and requested for map and directions from the hotel reception. We rented 6 bicycles with locks, and started to cycle towards the first junction. Since it was dark, we turned on the dynamo and cycled with beam. I tell you, at this point of moment, I felt like PocketRocketMan! Hahaha! Keras jer peha! You know what, Pak Ein and his wife are better than me in this coz they have their own mountain bikes at home and cycles 2-5km every month! (My brother is a hardcore fan of bicycle.) 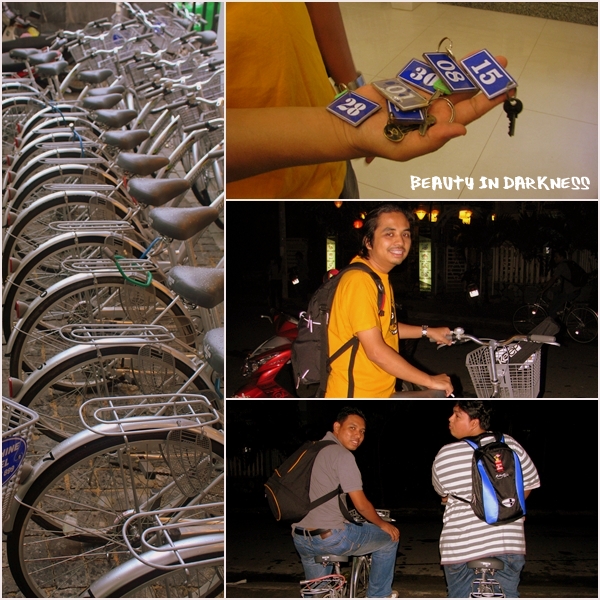 After few left and right turns, we had to stop due to Aqram, Dan Arif’s bro, had difficulties. Pak Ein advised him not to carry on for his safety. So he decided to return back to hotel and rest. We then continued looking for direction to town and stopped over at one shop, to ask for the correct way. It happened that the shop sells plastic ware, so we grabbed 4 pieces of Tupperware for instant noodles back in the hotel.

I then asked for the direction from but they hardly understand and hardly know how to direct us. The shop helper then went out from the shop and stood next to hubby. Without saying anything, he pointed straight, left, then one unique action that we barely understood. It took us 5 minutes to figure out what the action was, till Dan Arif suddenly guessed it right “Ohhhhh junctionnnnn!”

We continued cycled and reached the said junction. Vehicles were now everywhere, compared to those alleys where we came from. They were honking here and there all the time, showing that we were 100% confirmed, in Vietnam. And what we had, just that little silver round ice-cream-bell that produced “kring kringggg” sound. Loser. Hahaha!

At the Pan Chu Trinh junction, Dan Arif quickly checked his Google Map and led the way, where we finally approached the ancient town. Souvenirs shops were in lines, alongwith local choices of shoes, apparels, and what not. 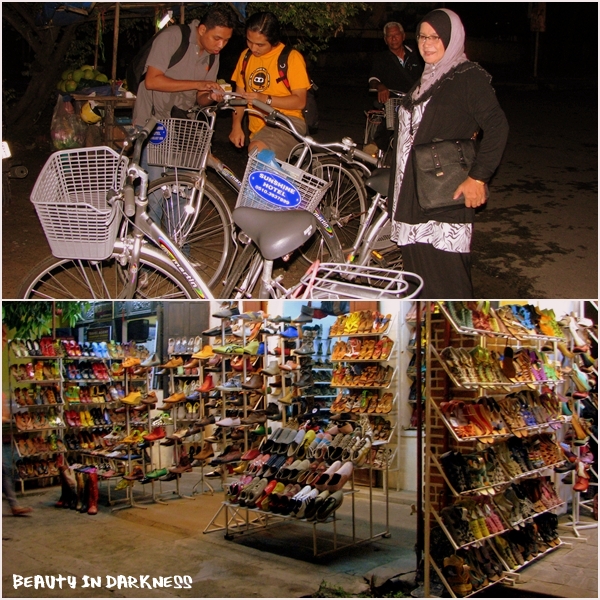 We cycled into one of the alley and saw one ticket booth with two entrance guards in uniform. The signboard showed that it is the way to the ancient town of Hoi An. I approached the booth and right away asked for 5 tickets (VND90,000 each). The ticket is valid for visiting 6 cultural places that you can choose from 18 sightseeing options, like bridges, temples, old houses, museums, halls, and workshops. Since we had listed out our options, we cycled towards the night walk area, where we saw hundreds of colorful lantern before us. “Let’s go there!” 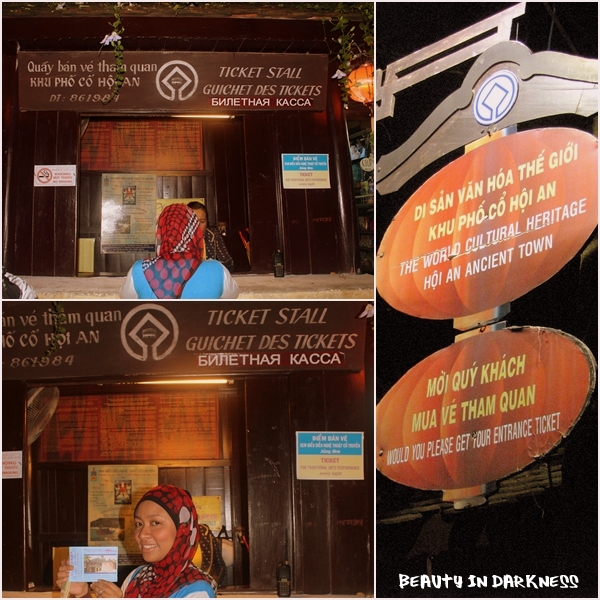 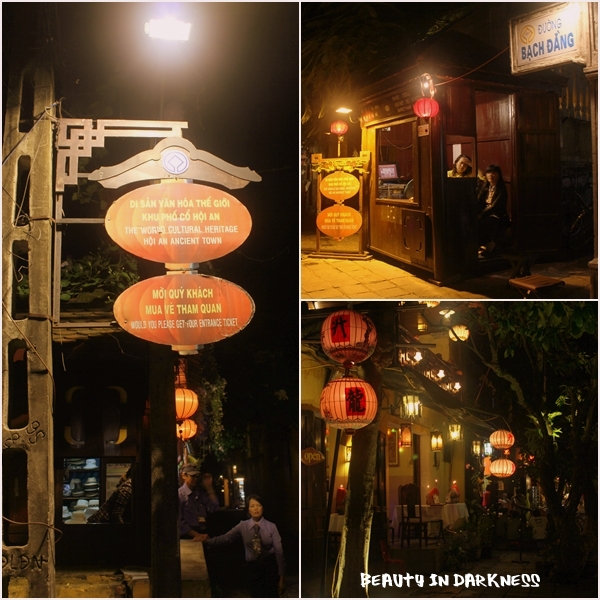 While cycling in the dark, we saw other tourists walked behind us. They passed the entrance booth, without paying any! We were like, huh? No need to pay ke?? How come the guard just let them in? I quickly looked at the ticket and it was written down there, in italic, “Thank you for your donation to maintaining the ancient town of Hoi An – the world cultural heritage.”

Fine. Anything to save the world heritage. Take! Take!

At the end of the alley, we saw locals and tourists loitering around, some were holding lantern, some were eating by the riverside, and some were singing/dancing, more or less having their best night life, I guessed. Since this area is a walking street, we parked our bicycles at one corner and locked them up. 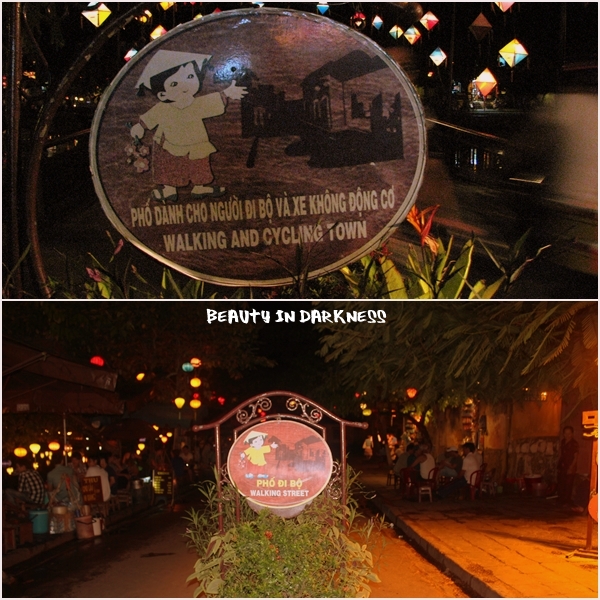 We then headed to the lively and shiny bridge where locals hung colorful lanterns at both sides, in celebrating Full Moon festival. They also offered small lanterns to tourist (with small fee), to let it go into the river, resembling letting go your wishes. Local boat operators were also calling out for tourist, to enjoy night boat ride. Among the lanterns, I saw Malaysian flag on it. Next to it was Israel flag. Dang. 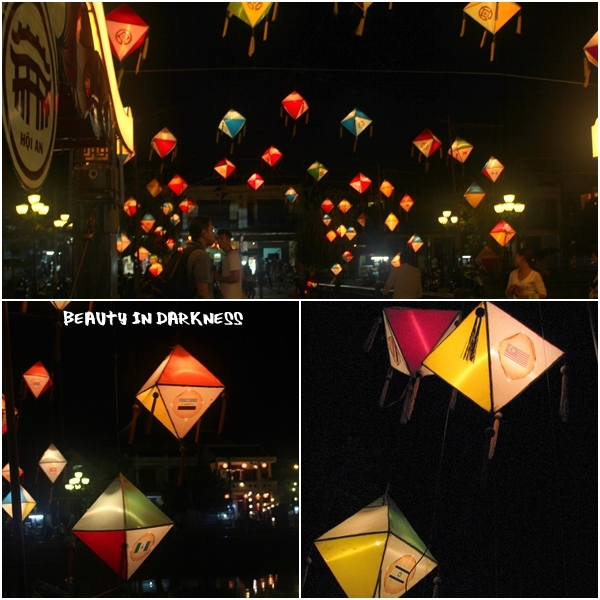 Dan Arif quickly setup the tripod and took few shots for his video. It was indeed, beautiful ancient town by the river that mirrored the buildings and lights, perfectly. Later, we lined up and snapped group photos and enjoyed the scene. 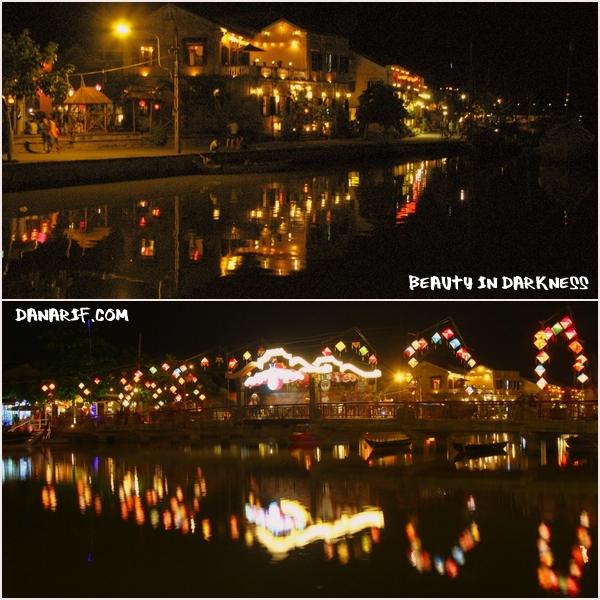 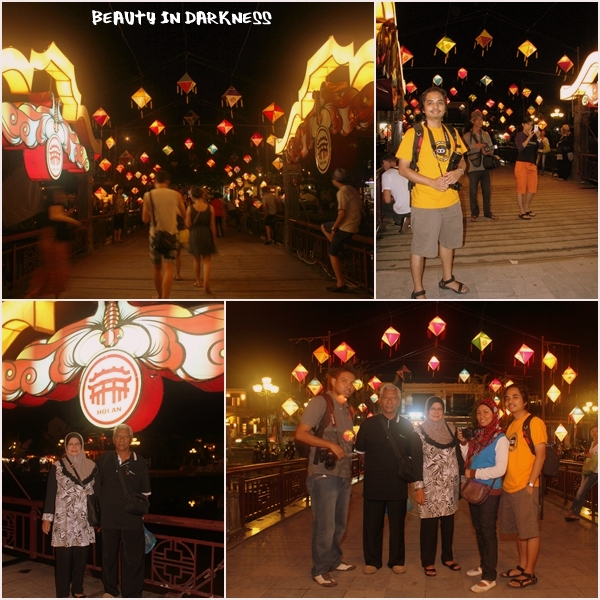 “Where’s the Japanese Bridge?” Hubby asked. He was dying to see this bridge, since the day we came to Hoi An.

“I don’t think this is it. The bridge is covered and more antique.” I explained how the bridge should look like, since I was the one who compiled the info in our Tour Cookbook.

“It might be covered only when it rains.” He added.

“Definitely not! It should be non-convertible…” I confirmed.

And so we looked for it.

Unbuttoned by Biqque at 4:21 PM