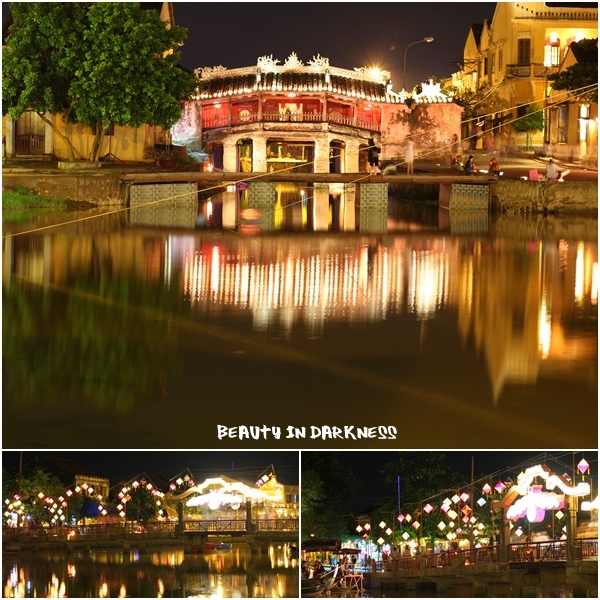 We left the night market and walked closer to the river. From the opposite site, we tried to get the best photo out of the Japanese Bridge. Next to us, there were teenagers breakdancing, and got excited when Dan Arif recorded them. Meanwhile, Pak Ein stopped by at one young local who was having battery-operated bicycle. I can see that he really like the bicycle compared to what we were having at the moment (hotel bicycle). Hubby then led the way back to where we came from, crossed the lantern bridge and turned left, towards the Japanese Bridge. 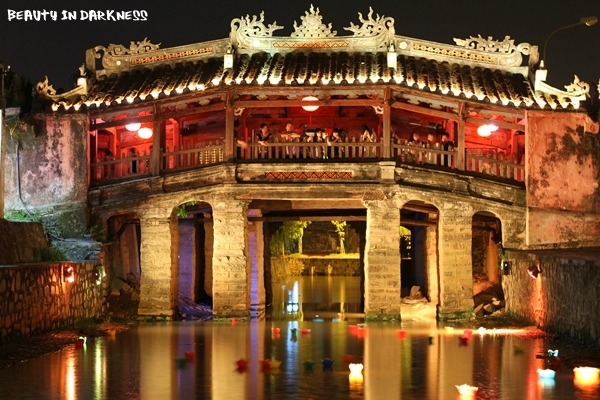 This bridge is one of the famous attractions in Hoi An that belongs to the Japanese Community, built in 1950s in order to create link with Chinese quarters across the stream. It was then flatten by the French to suit their motor vehicles, but the original arched shape was restored back during major renovation work. At one end of the bridge, there are two sculptures of dog and monkey (that we missed them), as a symbol of sacredness. It was recorded that this bridge was initiated in dog year and finished in monkey year.

Another religious theory was, this bridge was built to pin down the “mamazu” dragon monster, whose head located in India, and tail located in Japan. So why Vietnam? This was due to Vietnam’s location that happened to be on the dragon’s back! The movement of the tail was believed to create earthquakes in Japan. So by spanning down the “mamazu”, it can prevent it to be happened. But we can see that, once in a while, the dragon did some “stretching” huh? Hahaha. 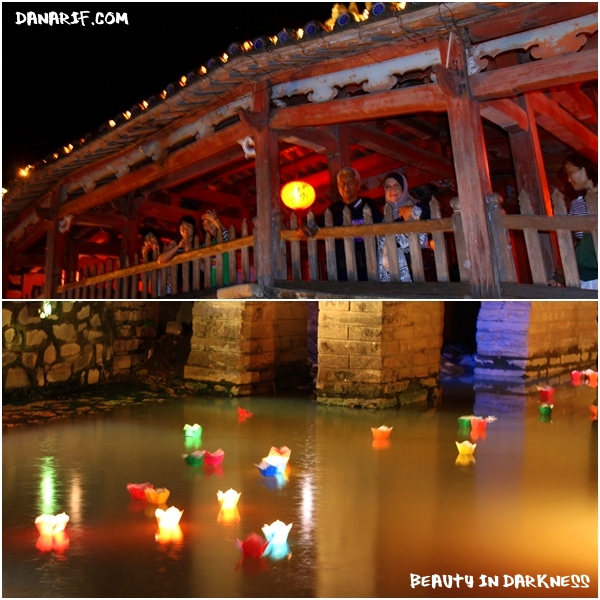 While enjoying the history, rain started to drizzle. We quickly put on our ponchos and snapped pictures. I had to hold the umbrella to cover the camera, while hubby doing his great job, capturing the bridge and flowing lanterns. Pak Ein and his wife quickly walked on the bridge and get themselves covered. Next to this bridge, there was one old classic emperor’s covered litter by the road side. I wasn’t sure what it was called, coz litter should be wheelless but this one has two wheels, slightly like what Chinese and Japanese ancient transportation. So we played the role. 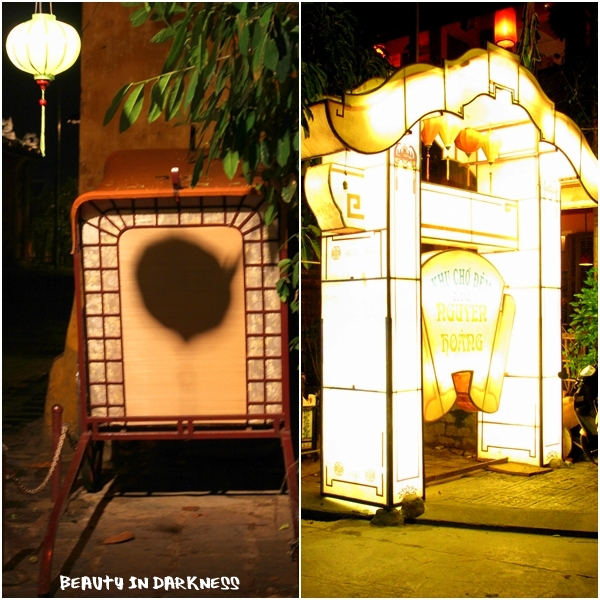 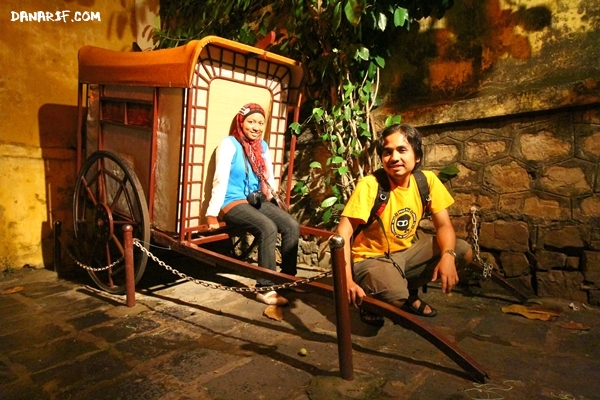 After few shots, we walked back to our bicycles. In ponchos (with the helped of plastic bag), we cycled back to the hotel. 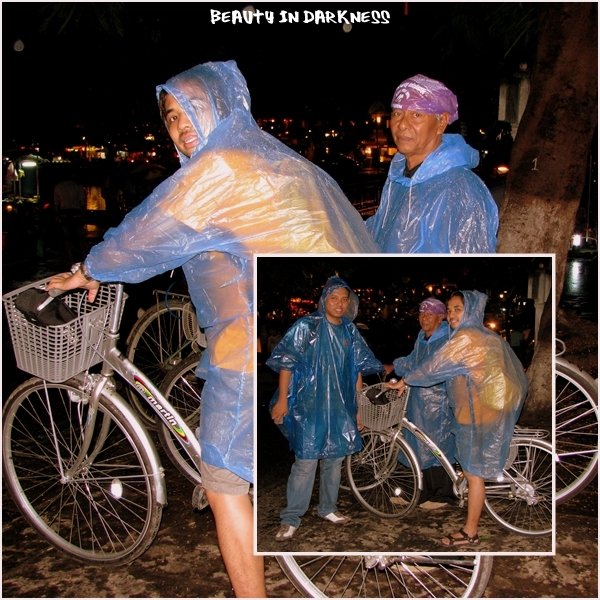 “Dan, bite your poncho!” I saw Dan’s poncho started to slip off, fly here and there, not covering his head. Lucky we had a better poncho with string around the face (bought at Saigon few years back). So, make sure you check your poncho, guys.

At the hotel, we handed back the bicycle keys. Out of sudden, Pak Ein asked for rice! Aku dah agak! I asked the hotel reception whether they still have rice in the kitchen. Guess what? Pak Ein had the biggest smile on earth when he got to know that the hotel did serve rice for dinner in the café, with reasonable price. Being Pak Ein’s supporters, we took 5 sets of plain rice and brought back to the room. Not only that, he took soy sauce and chili sauce right from the dinner table as well! Bahagia. 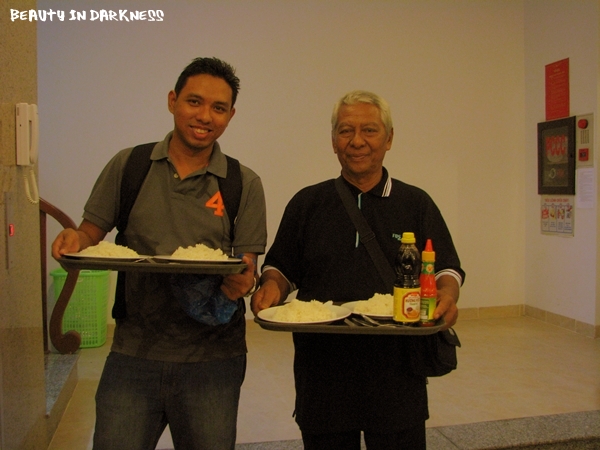 Can't wait for My Son tomorrow!

diana, tx :D hubby really did a good job, similar tu what he did at kobe bridge in japan :)

I like Hoi An, one of the most beautiful places I've been to this year...the Japanese Bridge is the trademark of the town...

jeff, i love hoi an compared to danang. and the japs bridge is beautiful though it is small :)