We then went back to villa to refresh ourselves, before we drove to Eny’s parent’s house. Good to have all locations nearby, huh? We just drove around the village, easy! On the way to her mom’s house, I saw lots of poor-built houses. A rectangular plaited mats as four-walls, with no flooring, and no rooms? I wasn’t sure, to call it a house or not. Reban kah? Eny said that these houses were donated/built by the government, as a temporary living quarters, before they were given a new house. Initially, yes. But now, why they still live in it? The government aren’t kidding right? It was already 2 years since the eruption. Corruption kah? 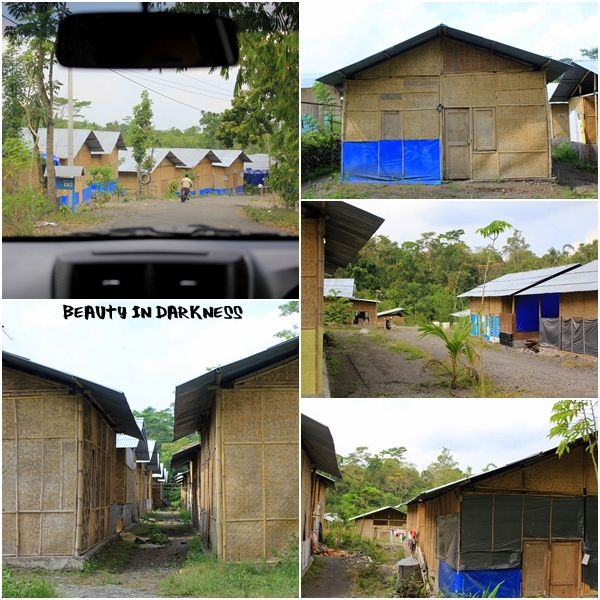 Good enough that Eny’s parents have money to rebuild their house. It is their heredity that whenever the kids got married, the house will be divided and parent’s area will become smaller. So, the more kids you own, the smaller area you’ll have. Unless, you widen the house lah. We parked the car at her sister’s house. Later, she showed us the damages where the lava made a huge aisle next to her sister’s house. The most damaged part was the wall, where it peeled off like your black cracked night masker. They had to wash the floor hundred times, to clear the ashes. That was even better than her other sister’s house that had no wall at all. Gone case.

Walking towards the house with mini jungle around us had mesmerized me much. I saw HUGE bamboo trees that almost as big as my hip! Even bigger than what I saw in Bamboo Groves in Arashiyama, Japan. And they were super TALL! Mama and Abah laughed out loud when they saw this foolish daughter in law who almost hugged and cursed yelled how big the bamboos were. Well, I purposely created the scene la. Bosan kot. Hahaha! 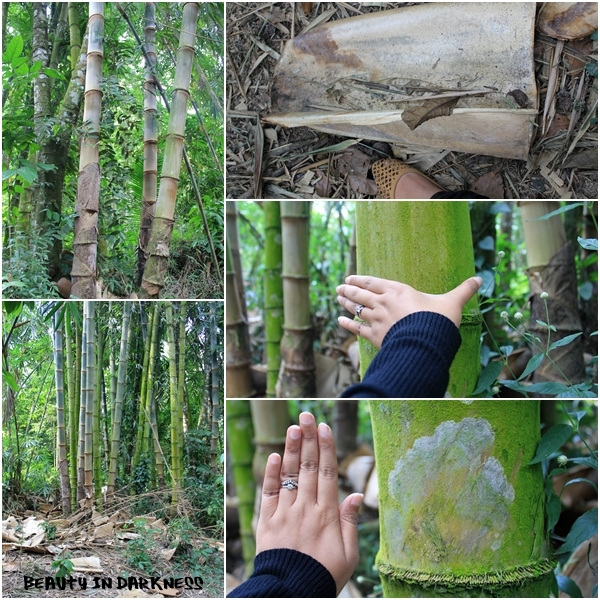 We then entered the house. No sofa...but got tiles. Sitting next to me were fat and old-fashioned TV, and newly bought rice cooker. There was a single-size mattress as well. *Krik krik* The wall was made with bricks and volcano soil, that made the house a bit colder. Before the eruption, Eny told that the floor was 100% black soil, but now, they installed tiles at the living hall. The windows were also nicely built. 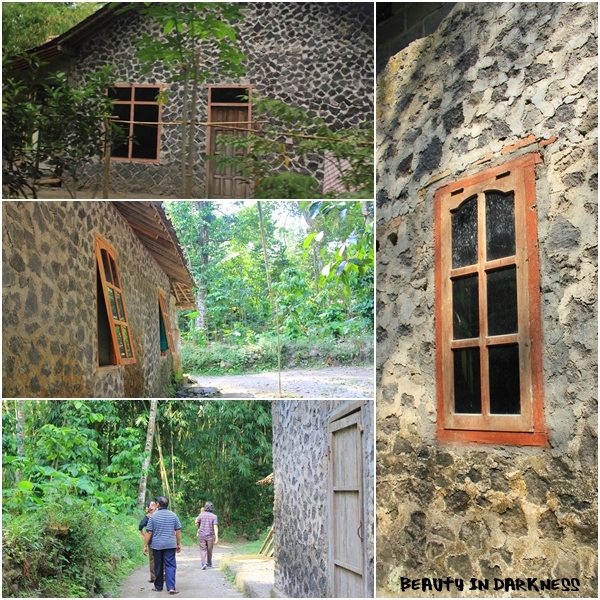 We sat on the floor and started to smile at each other. I looked at Mama, Mama looked at Wan, Wan looked at hubby, hubby looked at Abah, Abah looked at Eny’s dad, Eny’s dad look outside. Eny’s mom? She spoke something with non-stop laughing. I swear to God, we didn’t know what to say and how to communicate. Eny told us that her parents speak Java, but we know no Java. We know bit of Indo sinetron-slang but we had no idea whether they understand or not. At the end, Eny was the one who translated the whole conversation to both sides. The funny part was, the joke was made, but the laughter delayed few seconds later. Hell no, we didn’t laugh for the joke coz we did’t get what the joke was about! We laughed looking at Eny’s mom who laughed until she almost fell on the mattress! I swear, she laughed like she just had “ice” or “shabu” or “weed”! Hahaha! Now I know why they had mattress at the hall! Kahkahkah!

Then came the best part, lunch time! The scariest moment for Mama, I bet so. Coz she’s a completely choosy classy yet conventional lady that I’ve ever know. For me, it was a fun time scene! Let’s see whether she eats this simple dish called “lele goreng” (fried catfish) and steamed water spinach with “sambal goreng”. (Remember the super hot sambal that we had in The Waroeng Raminten? This one was eatable and lesser hot.)

Being me who usually eat “kampung” food, I must admit that warm and simple dishes are the best. I was the one who finished the first serving, and eagerly wanted to call for a second serving, BUT I was too timid! What Mama will say if I add? (Eii makan banyak nyer!) But what Eny’s mom will say if I don’t add? (Tak sudi ke masakan dapur kayu?) Well, I did add the second serving. You know, I actually wanted to go for third serving but hubby started to squirt his eyes, hinting that I shouldn’t. Why?? WHY?? That “sambal jawa” and “keli goreng” was an excellent combination! Cruel you. 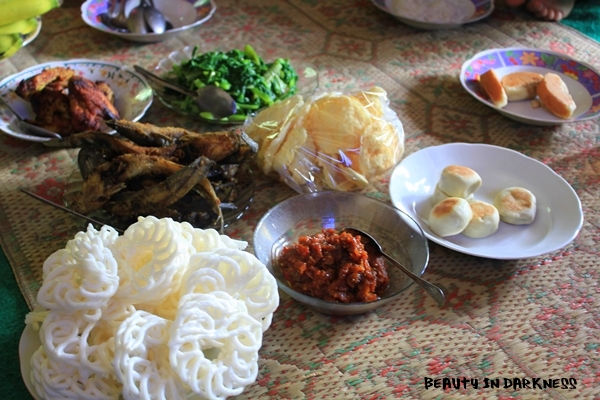 Mama? She ate a bit. Voila! Meantime, Abah just being well-mannered and finished his first serving. Same goes to hubby and Wan. Boring. While Eny did the dishwashing, I peeked in the kitchen area. I wore slippers to walk around. The wash area was as big as our normal toilet. The kitchen was as big as our guest room. It was attached to the masterbed room on one side, and path to the backside of the house, on the other side. And they cooked using firewood. Like campfire everyday, you know. Nice huh?

We then being served with Jogja special tidbits called “bakpia”. It was hard to bite but it was tasty to try. While eating, Eny’s dad’s younger brother came and introduced his family. Quite a humble young village chief, who wore knee-length pants. With this man, we fairly understood his slang coz he spoke good Indo sinetron. Hahaha! We finally stepped out and stood outside, in front of the main door, looking at two sapi (cow). Their life was quite easy coz they have paddy field, they plant vegetables, and they catch keli (catfish) whenever they want. 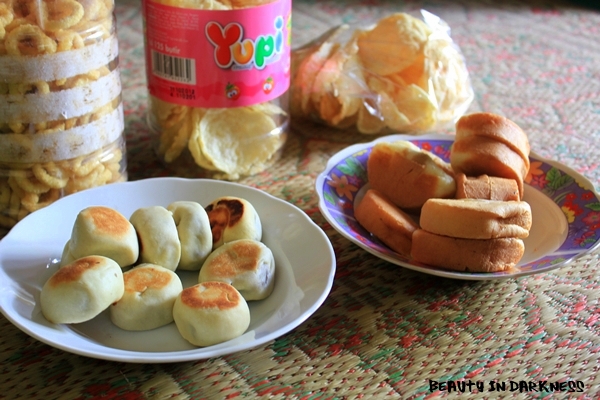 What?? Is that…a dog? A small dog?? (You guys should see Mama’s face when she saw this dog! Hahaha! Well, she’s a typical Malay lady kan.) 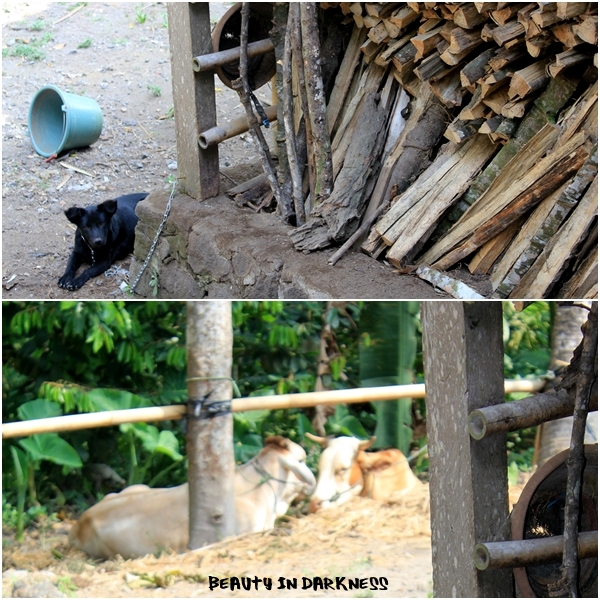 The dog was tied, looking curiously at us. I was told that they kept this dog to watch over the sapi. (But the dog was tied…how?) Sapi is precious and one sapi can cost them a house (if they sell it). I didn’t ask how they feed the dog, or bath the dog, or walk the dog, but I believe that they know what is okay and what is not. I know we can keep a dog for a reason, not for saja-saja.

“Makasih ya, datang dari jauh, ketemu keluarga yang ngak sama tarafnya ya…” Eny’s mom almost cried out when she thanked us for coming that far just to see them who is not as par as us.

“Ish…ngak…semuanya ASALLLL dari kampung…” I stressed out the word (we came from village too), like former Raja Lawak tagline.

AND ENY’S MOM DID IT AGAIN! She laughed out loud NON-STOP, and walked back and forth while carrying Haikal in her arms! HAHAHAHAHAHAHAHA! Everyone laughed looking at the laughing mom! She's so funny!

We hugged each other and invited them to come to Malaysia. They rejected nicely coz they are afraid to fly. "Bot aja ya buk?" Hahahaha! Eny’s mom clearly loves me, I kid you not. She insisted me to come back and make lots of babies. *Krik krik*