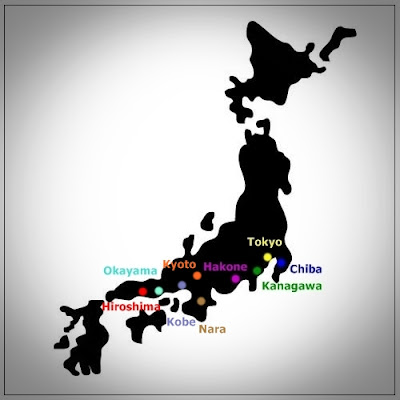 As much as I slept in peace, I woke up in peace too. We packed our things and checked out, leaving the dorm key in the box, on our way out. 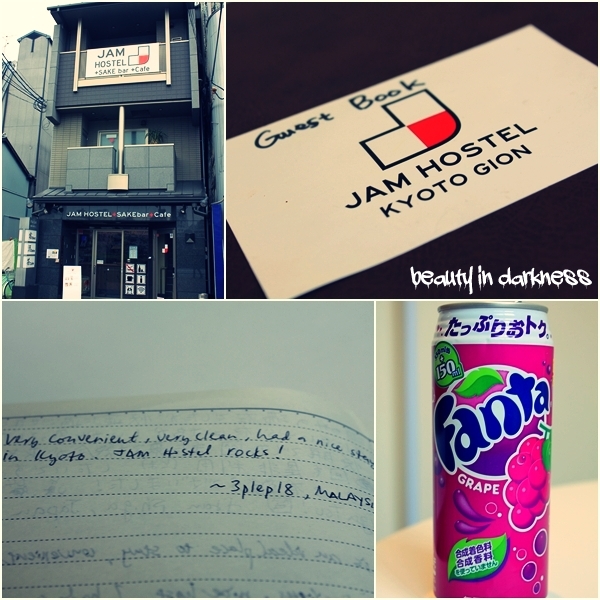 From Gion-Shijo Station, we paid 150yen for Keihan Main Line, and stopped at Tofukuji Station. From this station, we took JR local train to Nara Station via JR Nara Line, for an hour ride. Once arrived, as usual, we looked for coin locker a.k.a “coin loka” in Jap-English, to leave our bagpacks. 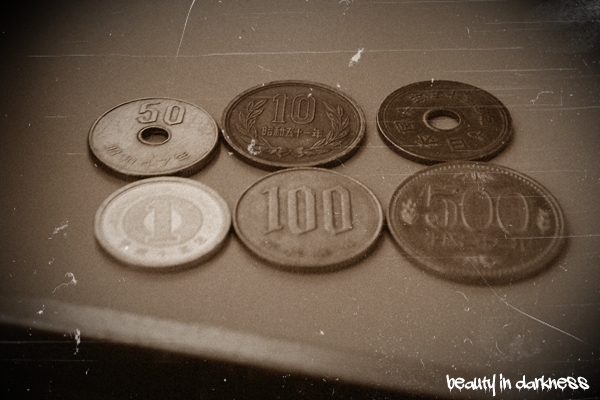 “Let me try first. I know how to make it fit. I’m the one who pack our travel bags!” I plak ketap gigi.

Guess what? IT OCCUPIED NICELY!

“See, all these while, we are wasting our money for 400yen locker, when 300yen locker can fit both bags! Lawan cakap bini nihhh.”

We bought various tempura and had a quick breakfast outside JR Nara Station. SUMPAH SEDAP and MURAH! 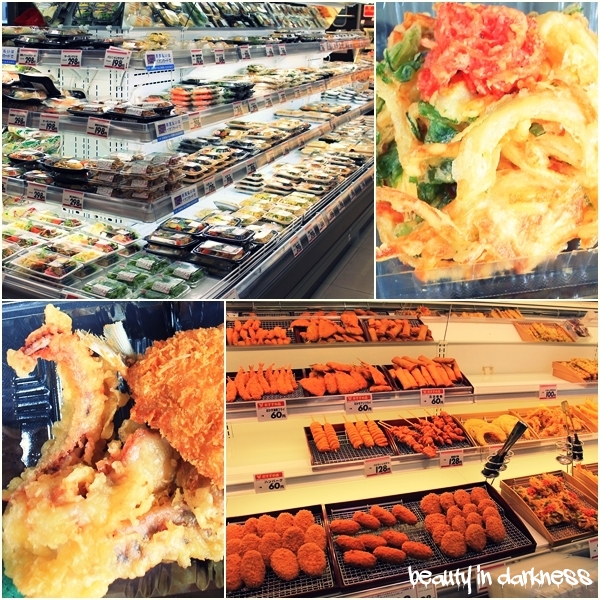 We then took a bus ride at bus stop #1 and got off at Daibutsuden Kasugataisha Mae. We were unlucky, for it was raining the whole time in Nara Park. Anyhow, we continued the exploration with the help of none other than the famous Japanese see-thru umbrella, since Todaiji Temple is one of the must visit historical places and a landmark to Nara. 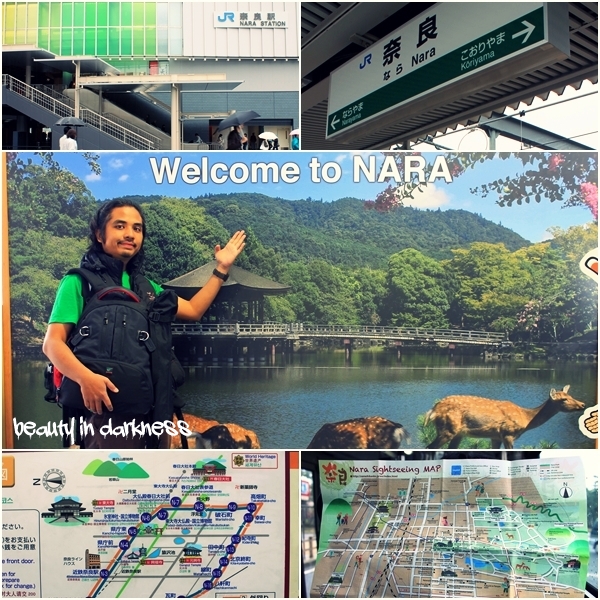 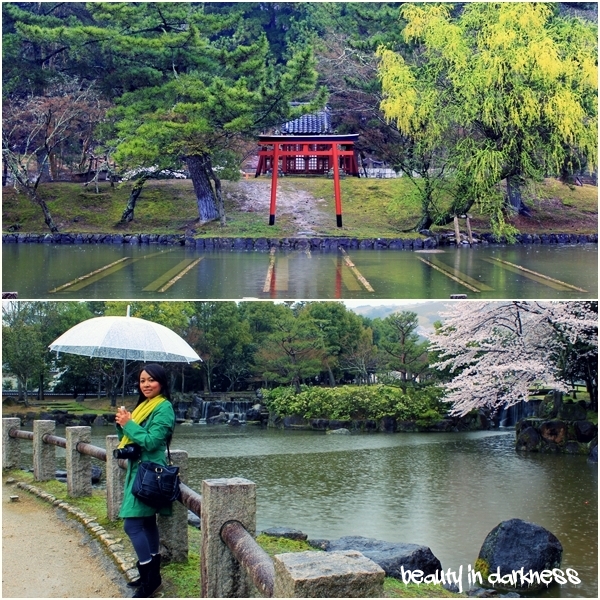 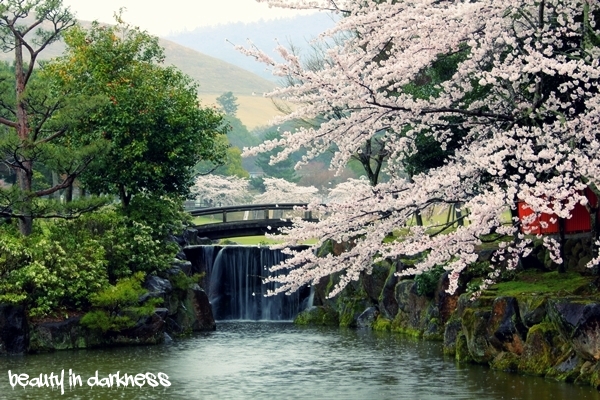 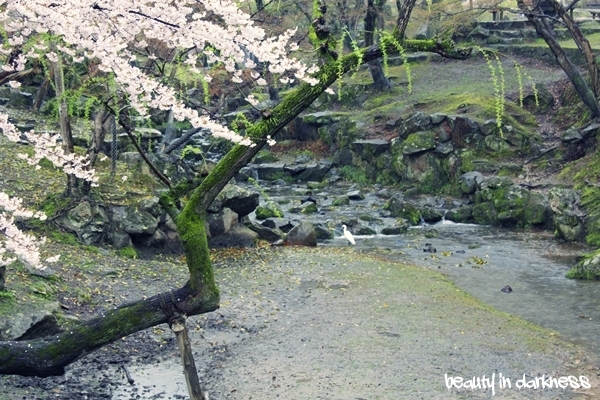 From afar, I saw more and more deer. Some were sitting under the tree, and some were walking in the rain. Nara deer were considered daring than Miyajima deer, as they constantly lingered around visitors, looking for food. Some of them tried to peek in visitor’s pocket! But here in Nara, there were push-carters selling deer pancakes. So visitors can buy deer food with 300yen per pack (5 pieces in one pack). It was fun to see one of the visitors didn’t get a chance to snap his act feeding the deer, when it grabbed and ate the whole pack in a second. Hahaha! 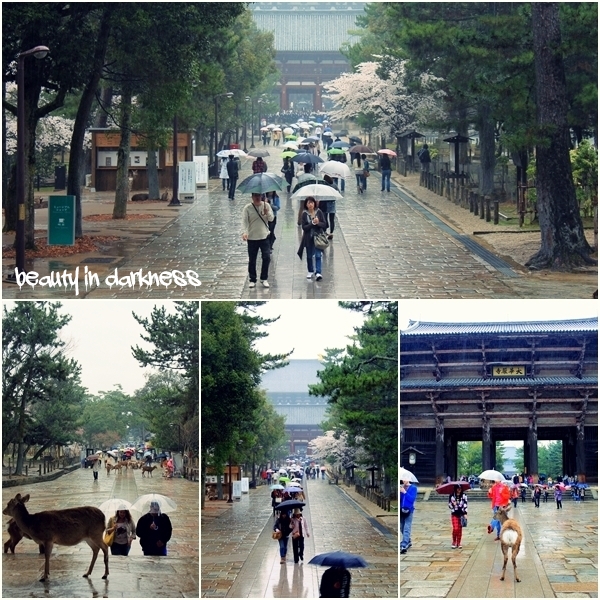 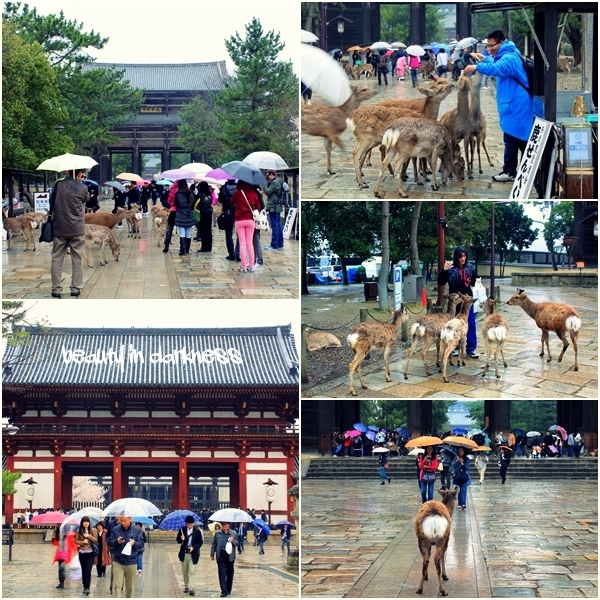 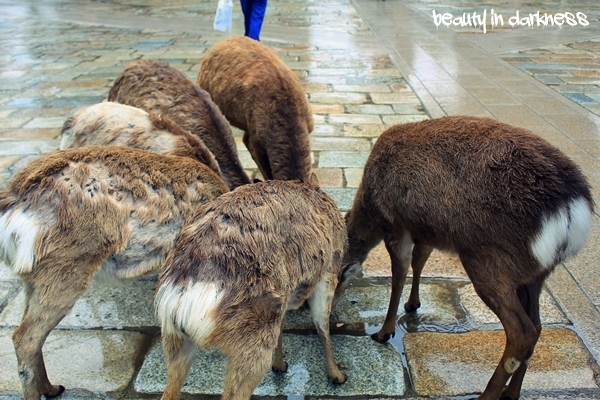 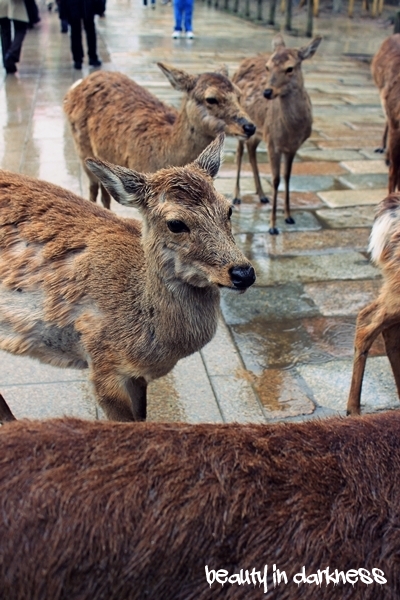 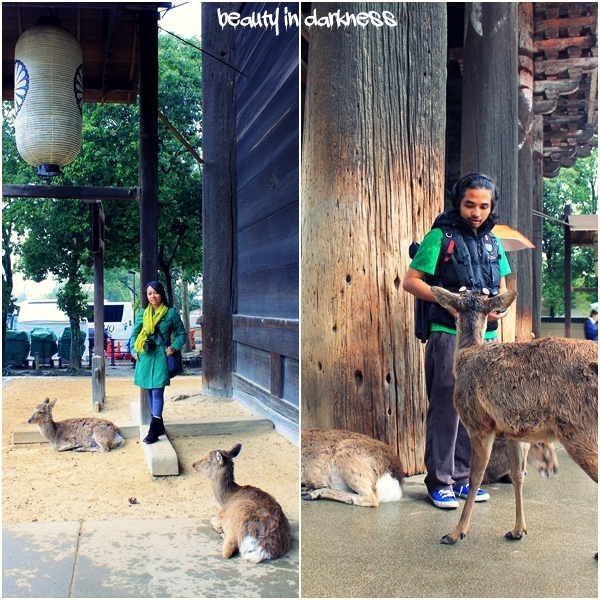 We then walked towards the Todaiji Temple and started to amaze with the huge structure. It is authenticated as the Japan’s largest wooden building with largest bronze Buddha statue, when it was only two-thirds of its original. Moreover, there’s a pillar inside the temple which has a hole, the same size as the Buddha nostril! And squeezing through this opening will be granted enlightenment in their next reincarnation. Aduh, khurafat lagi. Hehehe!

“Going inside?” I asked hubby.

“No need. It is best viewed from the outside.” 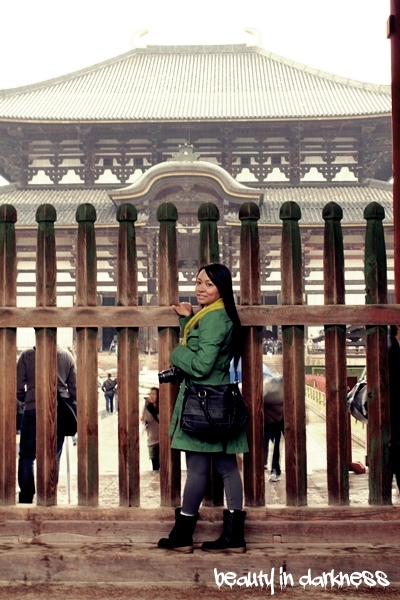 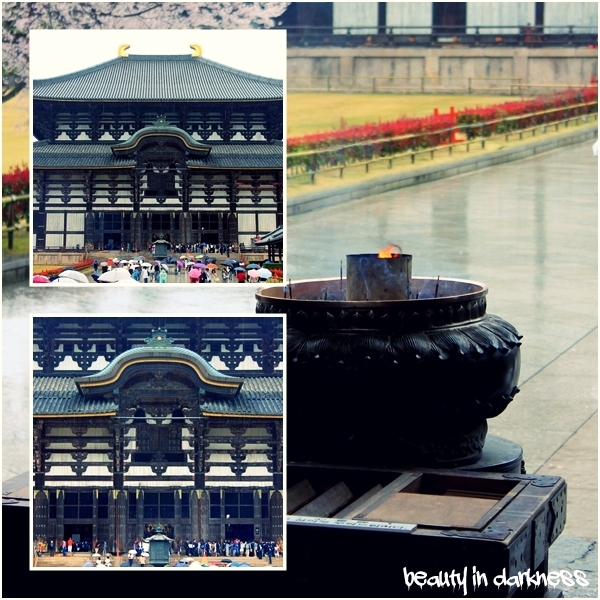 While taking few shots of the whole temple, there were two companies taking a group photo, right in front of the huge wooden gate. Cool kan? 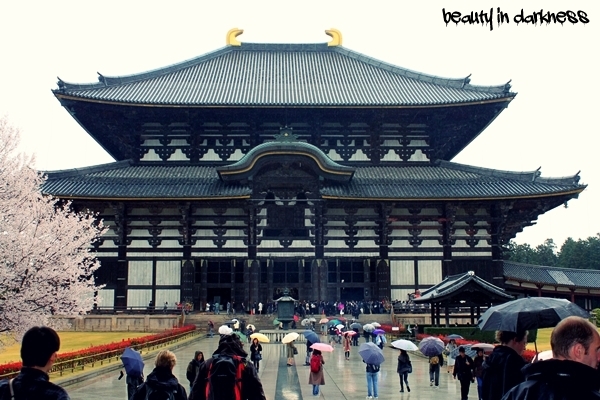 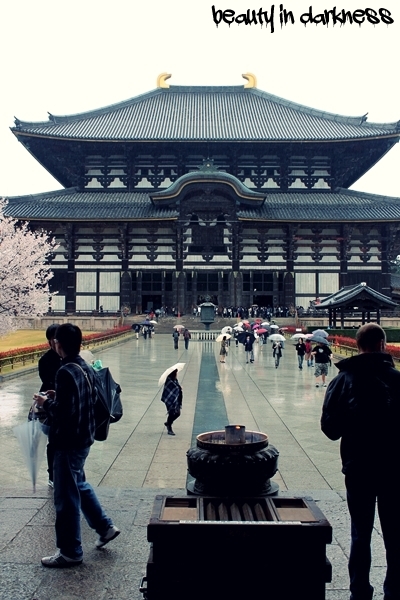 Similar to Asakusa in Tokyo, there were two fierce-looking statues, representing Nio Guardian Kings. There were kept behind wires, as they are served as national treasures. 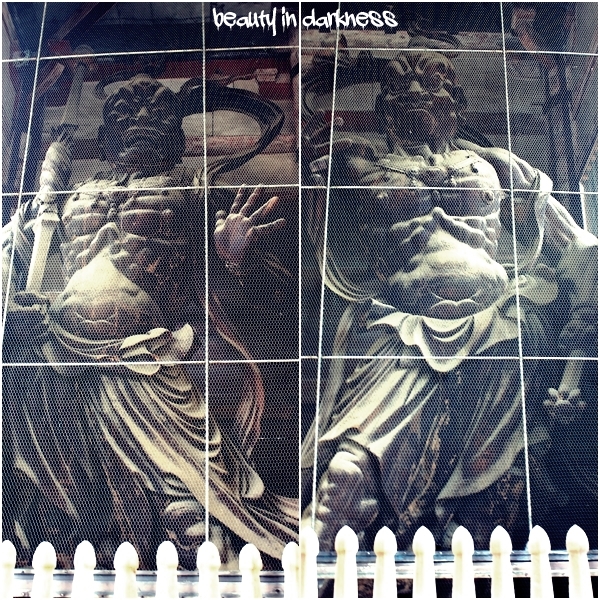 We then walked back to the park and stopped to look for a fridge magnet at the stores along the road, before we went back to the bus stop. At the bus stop, we look at the bus map since we had no idea whether we should wait at this side or that side of the road. 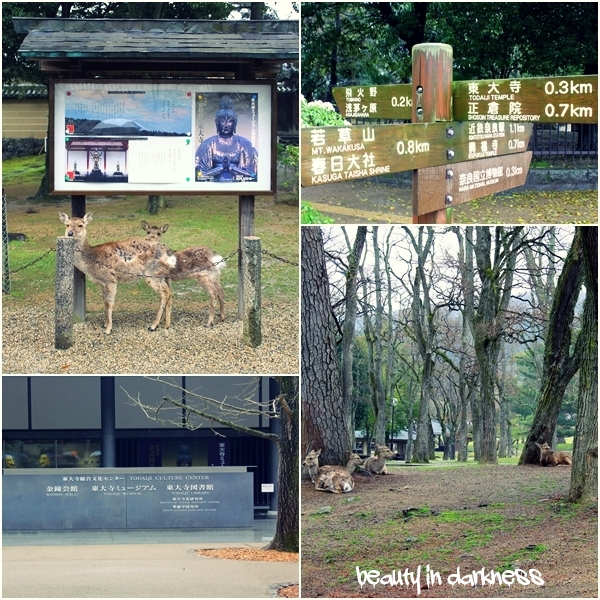 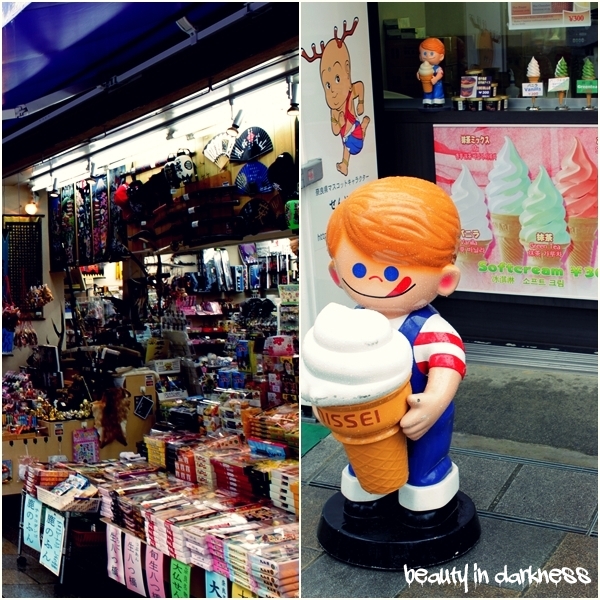 While looking and discussing, one oba-chan approached us and conversed in Nihongo. I seriously didn’t understand but looking at the sign language, I was pretty sure that we were at the right place. Hubby then noticed that regardless any code of the bus, we can still board it.

Finally, we safely arrived at Nara Station. Before we collected our bags, we went into Aeon Supermarket and bought fried octopus and fish. We ate then near the steps and once finished, we went to the coin locker to collect our bags.

“Eh, where’s the umbrella??” Hubby questioned me, coz I was the one who carried the umbrella.

I looked at my hand and gave him a vague impression.

“Owh! I leaned it over the wall.” I quickly ran to the place where we had our lunch just now. And thank god, the see-thru umbrella still there.

“If this thing happen in M’sia, sure gone already. Hahaha!”

Come one, the price was 399yen. I will definitely bring it back to M’sia…though the weather ain’t the same.

“You’ve done with chasing maiko. Now it’s my turn to catch ninja! To Iga Ueno, we shall go. Yahhhh!” He chopped me.

This is about travel n vacation, travel-japan-nara

Oh no it rained so much! I didnt even see rain except a 10 mins shower in Osaka. Well, your photos are much nicer and different because of the sakura flowers and many umbrellas!

I really love and miss the deers! They are so cute and bit my butt so much asking for more food!

That day in Nara was the toughest for us as it was suddenly cold like 11 degrees and we walked across the town till the train station! Gila mama, my toes ached like hell. I kept thinking whether Nara is ideal place for me to retire in. I might be bored there.

Both of you looked so matching in greens! I must learn to wear matching colours with my wife in future.

twilight, it was raining at nara and iga, both are amazing place to explore...hmmm...

walk to the train station? my gosh! jauh lehhhh...

my hubby would like to retire and stay at hiroshima :) hahaha!

it was coincident! my hubby isn't the type to match up things! malu konon...sob sob. hahaha!

hcv, i'm glad too! wahhh u celebrated new year in japan? envy to the max!

Nara!!! I missed out this place cause limited of time. This will be on my top of the list next time I go Japan. Banyak yah itu deer! Banyak juga makanan di JR Nara Station. Macam semua sedap-sedap belaka.

diana, just a stop-by will do. the food were variety and sangat sedap! hehehe!