A History of The First Galeria, Taiping, Perak

“I really want to visit this one place…you know, that beautiful half-wood half-brick building at Jalan Stesen?” I voiced out my request to hubby.

Hubby told me that the place has admission fee and we still have time to visit this place, if we want to. I agreed without any doubt though it is chargeable, for I want to see what they exhibit inside the building. Hubby drove from Kota Ngah Ibrahim and headed straight to the town, where The First Galleria is located. The building is obviously easy to locate, for it is situated right next to King Edward Primary School.

We parked right in front of the entrance and walked around the outer compound. Stood before me, I saw one outstanding steam locomotive in green and yellow color. It stated “Telok Chempedak” with identification number 22125. The original rail was officially opened by Sir Hugh Low on 1885 and it was actually located at King Edward Primary School, before it was re-located at its current location. This old route connected Taiping-Port Weld (now known as Kuala Sepetang) and that is why this building’s address is named Jalan Stesen. 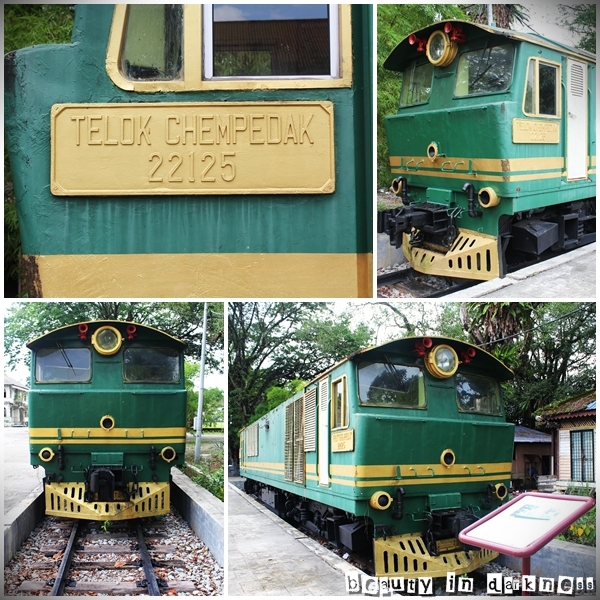 At the front yard, I saw three separate parts of extremely old wooden flyovers, which I believed used to be installed here. I wasn’t sure whether it will be refurbish and restore for viewing purpose, for the condition was quite bad. Stood still opposite the locomotive was the famous red phone booth with Taiping sign on it. This booth is one of two red phone kiosks that can be found in Taiping, which the other one is located in the heart of Taiping (somewhere around old big clock). 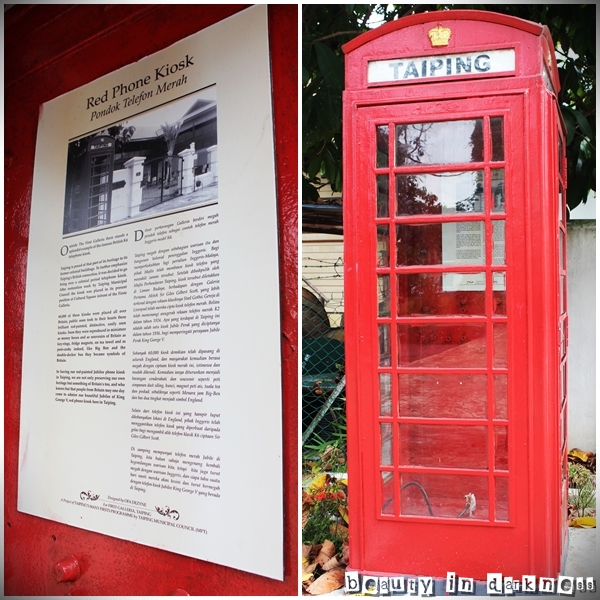 We finally walked into The First Galleria compound and entered the Gift Shop. We looked around and found that this shop was quite interesting, for it is decorated in old-fashioned and classic style of tea restaurant. There were old tricycles and classic tea sets too. The shop assistant did play his role very well by explaining almost every corner and section of it. What caught our interest most was the old pictures of Taiping that really flashback our childhood memories. 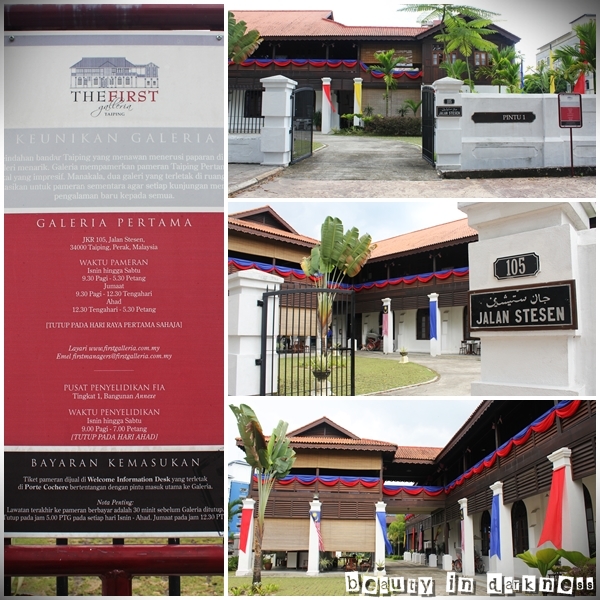 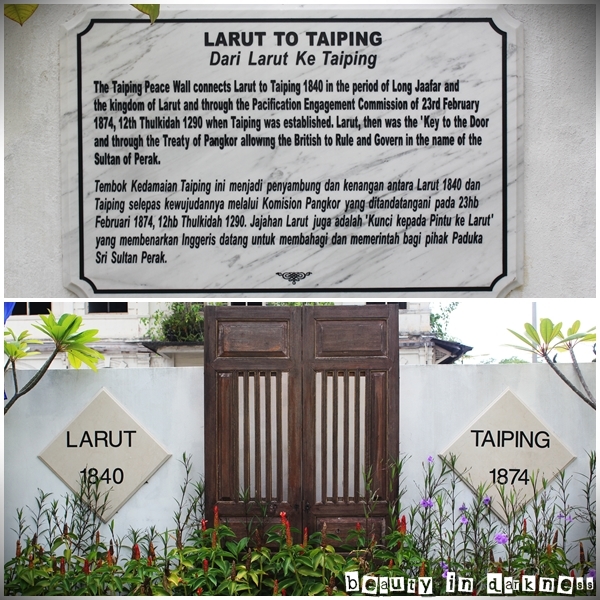 I asked the shop assistant whether I can take pictures of this shop and he mentioned that we can do so if we decided to enter the gallery. I nodded and asked hubby to purchase the entrance ticket at the ticket counter, outside the gift shop. Accompanied hubby and I were my niece and nephew, where it cost me 2 adults (RM8 each) and 2 school kids (RM3 each) charges.

We were then being told to wait and gather in front of the main wooden door of the building, where a guide will be taking us inside. A welcome greeting was done by one Indian girl who spoke good Bahasa. To our surprise, the tour guide was also an Indian lady, Margaret, who is very informative and well conversed in English and Bahasa. 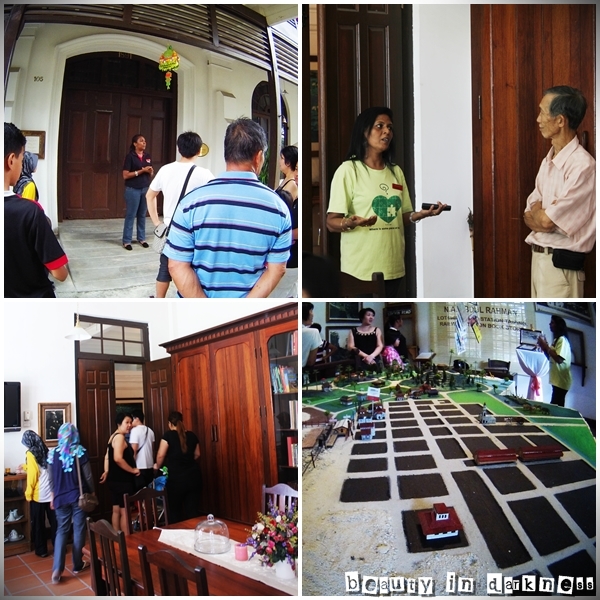 Besides us, there was one Chinese family from Ipoh, who joined in the tour. Knowing that I might not be given an access to take any picture (as stated in the Internet), I tried my luck by asking Margaret whether I can take pictures and she allowed me to do so. Great! We fully optimized the opportunity and took out the camera, the actioncam, as well as phonecam, and get ourselves ready to shoot. Haha!

We were led and ushered by Margaret, to the first room in the gallery that is the reading room. We were allowed to sit at the dining and the sofa before we were served with an intro clip of the gallery. It is narrated by the curator of the building, En. Anuar and to my surprise, I was sitting right on the sofa that he was sitting on! Haha! 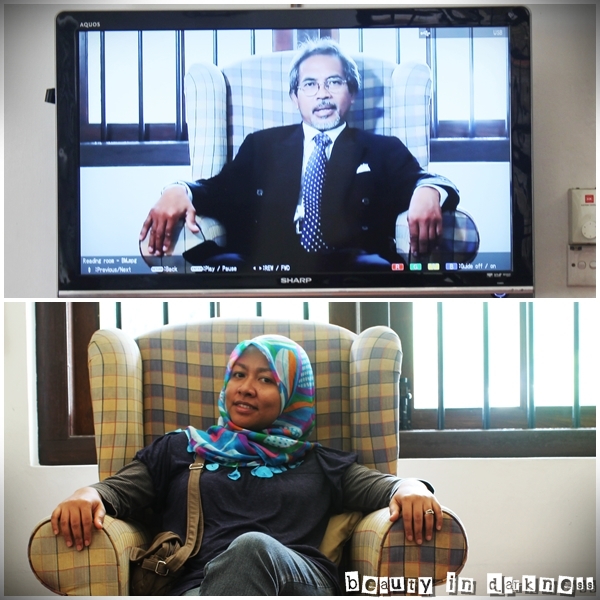 This building was built in 1891 and used to be a British residential, Pejabat Ukur, a furniture shop, and now, a galleria. It is now under a private care, First Managers Sdn. Bhd. and that is why the entrance fee is chargeable. It helps them upkeep the building, and add more exhibits in the coming future.

Ok, back to the reading room. Margaret told everyone that the book shelf is still in its original condition but they have refurbished few parts of it. Anyhow, the semi-moon window is purely original and hand-crafted, as well as its black steel bar. This style of window can only be found in two buildings in Taiping.

We then moved to another section where they exhibit old pictures of Taiping. Some of the buildings are still stand proud and some of them already demolished. The wet market is still standing until today but the street hawkers already moved to Cashier Market and Bomba. Taiping town was very well planned by Sir Hugh Low back in British era, with two main roads and few connecting roads. All buildings were properly arranged and built close to each other, to ease the British people. That is why you can never get lost in this small peaceful town. 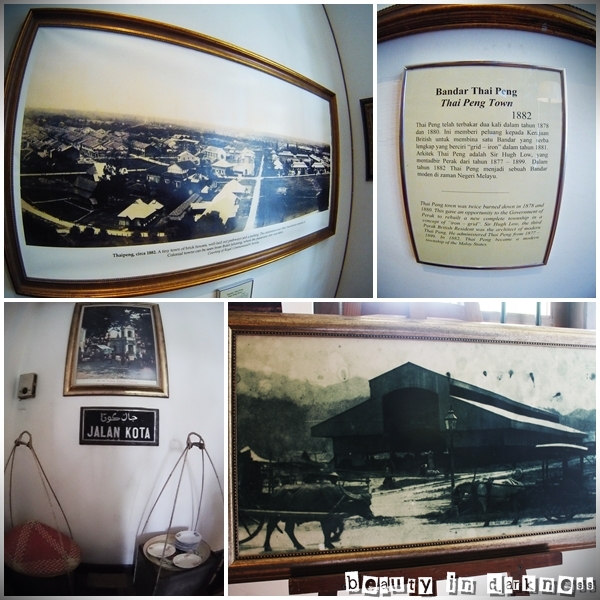 The were lots of original drafting and blueprints being kept in this special “strong room”, located at the ground floor of this gallery. The room door is designed and made by Chubb with super thick and solid material. Outside the room, we saw two interesting sections that introduce a railway book stall and tailor shop. I was smiling the whole time looking at the ambience, for it really reflects the typical Taiping. 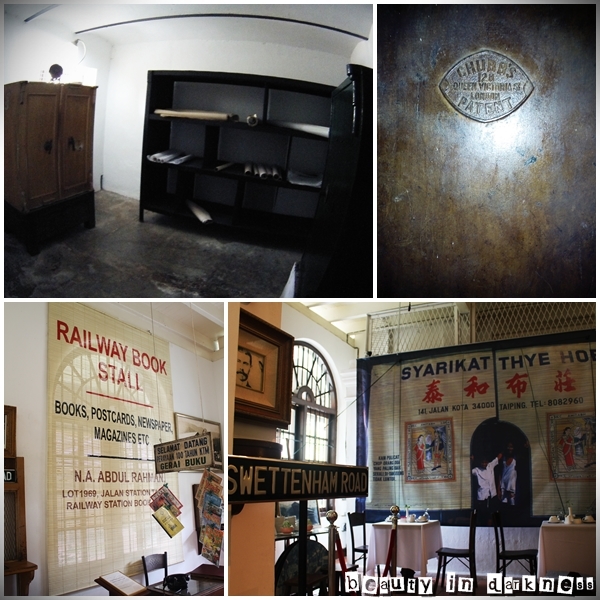 Margaret then led us to another room where lots of pictures of people being framed on the wall. A clip of them being aired over the LCD and I can recognize some of the faces. Among them were Gee Hin and Hai San leaders, Sir Hugh Low, JWW Birch, and Captain Speedy, who I “met” back in Kota Ngah Ibrahim. The rest were British officers, Sri Lanka’s engineers, and one of the Fenner’s, a lady who had connection with KRU’s mom. 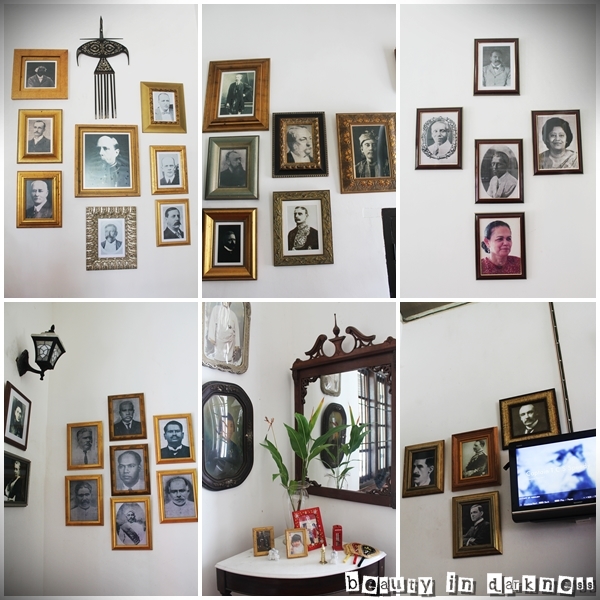 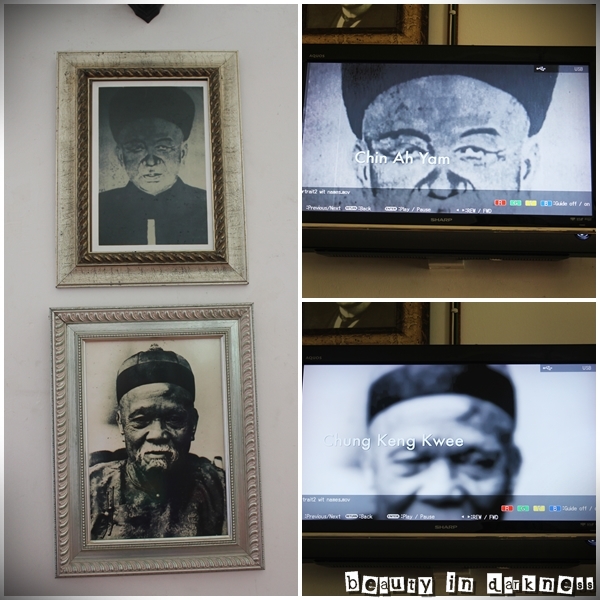 Before we were suggested to visit upper floor, Margaret asked us to write something on the guestbook, which my niece, nephew, and I did. An old Chinese uncle also took his chance to write and guess what, we wrote super long! Haha! He took so long to finish it, so Margaret led the rest of us to the upper floor, to enjoy the scenery from corridors. The upper floor is closed to public but whoever wishes to have event here, facility rental is available upon request. 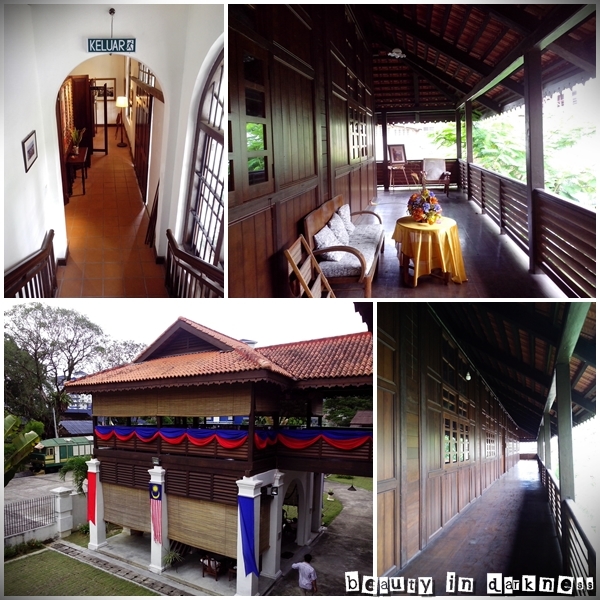 Walking down the stairs, I saw one picture of Merdeka celebration back in 1957, where one of the Taiping guy was involved in the ceremony. He was the one who held the flag, and stood next to Tunku Abdul Rahman. I think, regardless you were the VIP or even a flag holder, you must be proud of what you did back then…as long as we got the freedom, rite? 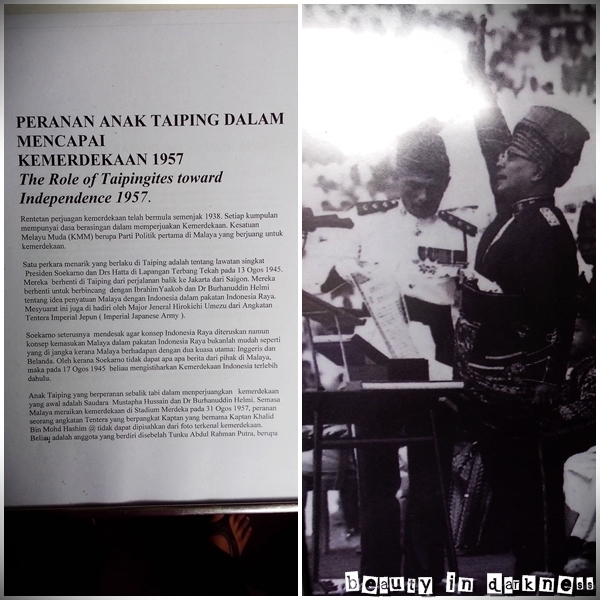 We then headed back to the Gift Shop and re-screened the items to buy. I got myself a fridge magnet (RM10 per piece) while hubby got himself a series of book (3 different books with total of RM60) that enlighten everything “first” in Taiping. We also bought a pack of 3in1 Taiping coffee (RM15 per pack). I really keen to buy those road names (RM20 each) but I am still thinking how can I deco it in my house. I can say that their products are quite interesting but a bit expensive...but I think they have their own reason for that. The shop assistant told us that The First Galleria will change its theme every 6 months, and to know what is the latest exhibition, we can get more info from their FB https://www.facebook.com/FirstGalleria. This place is really worth a visit! 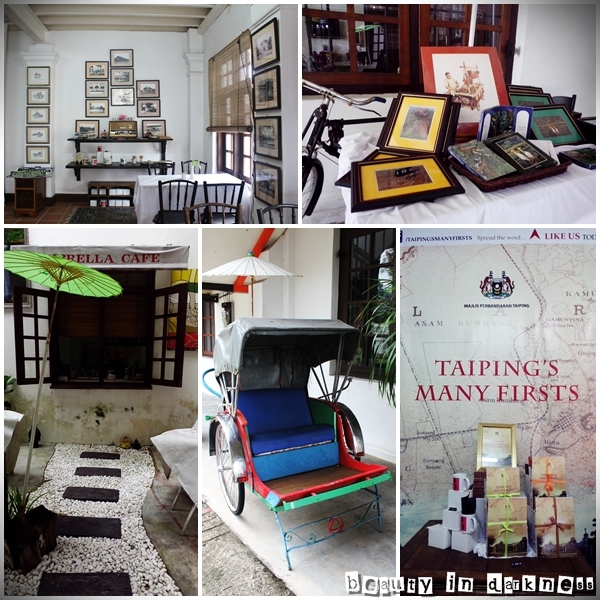 Before we walked out from The First Galleria, hubby stopped and said “Want cendol?”

“NAKKKKKK!” My niece, nephew, and I shouted happily.

There are two famous cendol hawkers in Taiping, Bismillah and Ansari, each on its own. Both of them still using the old-skool machine and producing hundreds of bowl everyday. Hubby then drove all of us to Ansari and to my surprise, we are allowed to bring the bowl and eat cendol IN THE CAR! How cool is that, huh? RM1.20 je! 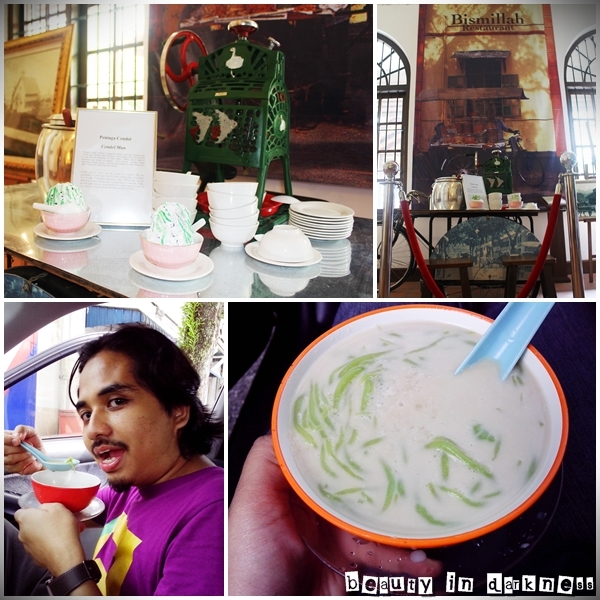 Whoever visit Taiping, you must include The First Galleria in your wishlist. Please allocate one hour plus for the tour, coz the tour guide is really really informative. Ask her questions, ok :) And oh ya, try this delicious desert, cendol ok!

Unbuttoned by Biqque at 1:49 PM

Looks like now I have more reason to visit Ipoh besides Kellie's Castle. I went Ipoh few times but never got the time to wander around.

diana, from ipoh, u come down to taiping. taiping has lot to offer. let me know if u wanna come hehe.

What an interesting historical place. You know I like old stuffs!! I will visit for sure.

We havent't got a chance to visit Galleria sbb masa sampai tue, Galleria belum bukak. So, kitaorang jalan2 kat luar amik gambar kat train and the building exterior. I guess, we're too early masa tue. And the worst part is that, we need to rush back to Kuala Lumpur on that day. Tue yg tak sempat tunggu nak bukak. I guess, next time la kot pergi.

twilight, indeed...if u happen to be in Taiping, pls go :)

Grate article. New to Addhunters? It's incredibly easy to become a member of our community, and FREE to list your classified ads to interact with all members. Every day, hundreds of listings get listed for free by our Addhunters members. You can always upgrade your membership and get ahead of the crowd. With Addhunters you're going to benefit from our international usages!Items listed on Add Hunters include electronics, pets, cars and, vehicles and other categories including land and property. The categories with the highest volume on the site are vehicles and property. For more details please visit our web site http://www.addhunters.com best qatar sale of year