It was the day where we had to leave Siem Reap for Phnom Penh. We went down and headed to the hotel restaurant for breakfast, and there was one Cambodian karaoke channel played on tv. I took the remote control and changed to one Malay channel, which was RTM1. Hahaha! Believe it or not, their cable got RTM1 and 2! 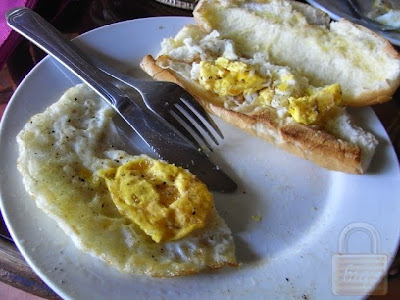 To kill time while waiting for the van to pick us up, we had a very wonderful moment in the hotel area, where we indulged ourselves with fish spa. There were two round waterwells that full with Dr. Fish, kept on nibbling our dead skin and tickling us a lot. It was hell of fun (before the jealousy attacked), when I saw more and more fish started to divert to hubby’s feet. Why??? He must have a very delicious skin! Cannot be! Not in this life! Well, fine…free fish spa, who cares. (I did…) 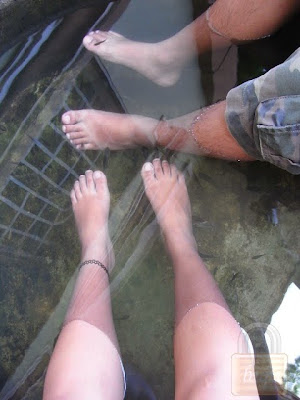 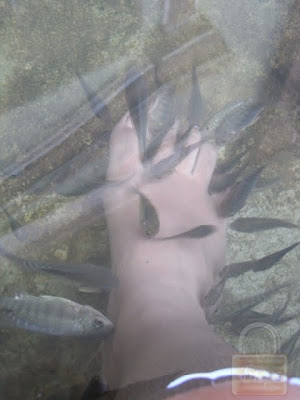 With 2 free internet terminals, I managed to update my FB status. We went back to the room and suddenly Mr.Mao, the hotel reception came and knocked our door to inform that the van has came. We paid for the hotel as well as the van fee, and got into the 12-seater van and sat at the last row. None of the seats were emptied, as one by one passenger was picked up along the way to the bus station. 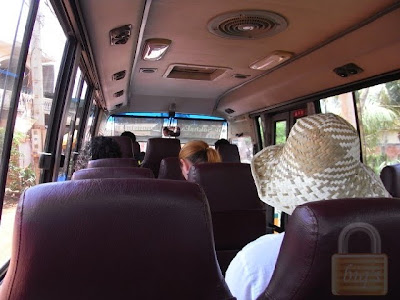 Almost half and hour, we reached the bus station that looked just like a row of wooden stores, where buses parked in front of them. It was known as Chong Kov Sou Bus Station. By the dusty roadside, we then play guessing-game on which bus was ours. Knowing the color of the bus from the pamphlet (orange and white) made us guessed it right. It was a regular 32-seater bus with AC, TV, on-board toilet, hot towel and drink as complimentary. 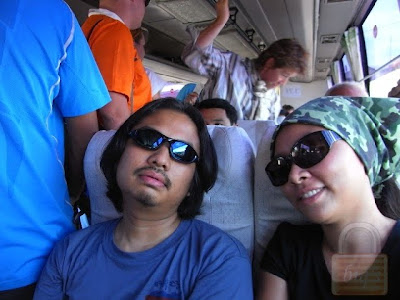 Generally speaking, it is better to buy the bus ticket from the hotel or agency, since they offer flat rate than to get it at the physical bus station itself. Besides, you can get an option to view the bus first (on photo) and identify the services they offered. Mekong Express was the most noted one, but having the same offer with a new-comer, Sorya Express, we chose the cheaper one.

The bus started its journey on time and we were blissful on board, affectionately looking at the TV screen…waiting eagerly to see what movie they were going to play.

I looked out the window…dried paddy fields, poor “nipah” rooftops and wooden houses, tattered plastic that to be contained with rain for fresh water, jobless family members and naked small kids playing in shoeless, skinny cows and horses, with blue sky and white clouds, made me pondered…how bad it could be, living in Cambodia, without money. But it is far better to live like this, than living in Pol Pot regime era, right? 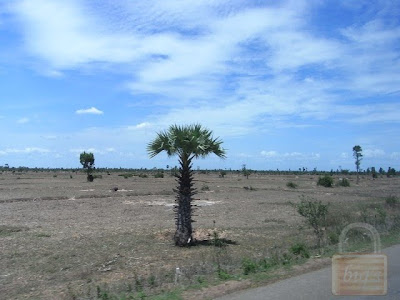 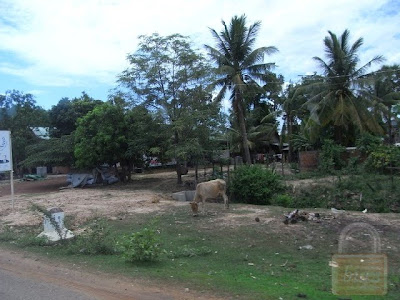 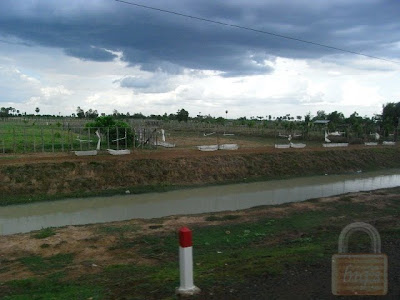 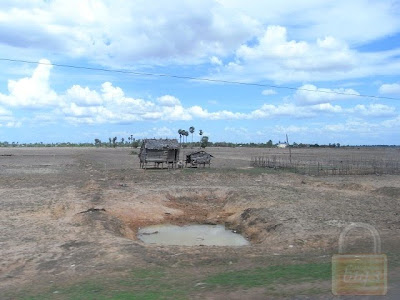 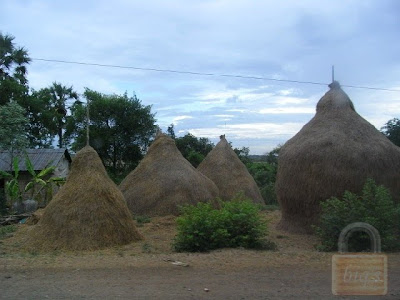 I looked straight to hubby’s eyes and he did the same to me…and whispered slowly,

Suddenly, the screen blank. God has answered to my wish!

Not more than 10 seconds later,

The bus conductor CHANGED THE CD! My gosh…I told hubby, yes, I LOVE KARAOKE, but I am going to die just by listening to this type of song! But hubby said no, I am not going to die, but I will sing along with the guy next to him. Hahahaha! (You can click Here to know how Khmer song sounds like.)

Yes, the guy continued singing. But only when the latest songs in list were played lah, or else, he remained silent if those were oldies/evergreen. Buduh lawak hahahaha!

And yes, the CD kept on changing after one and another.

We stopped half the journey at one place where we hopped down the bus to have lunch. Looking at all the non-halal restaurant and stalls, I just bought myself a pack of Oreo. There were hawkers selling fruits and, 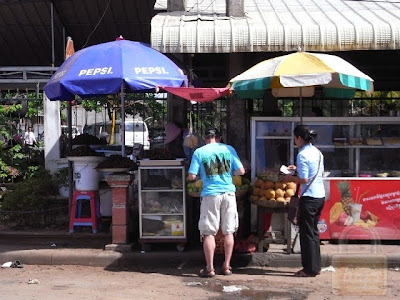 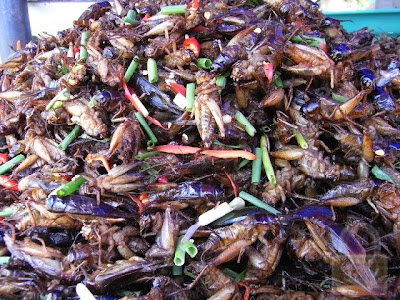 Variety of bugs and insects sold by the roadside. Brownish black, simply fried with onions, chilies, salt and pepper. Looked delicious but NO THANKS, I was sensible enough for not trying at that time. We just bought a pack of mango and pamelo. Yummy!

We went back to the bus and continued munching. We were obviously longing and hoping the bus conductor to play other than karaoke songs, but…

I saw one legged man with a crutch, in a sad face on green paddy field, been dumped by his girlfriend I believe, 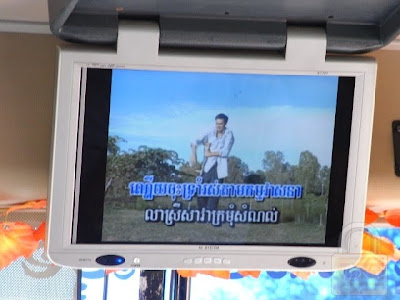 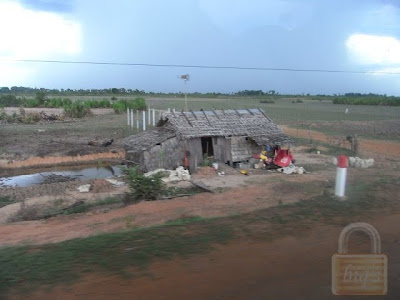 Uuuuuuuuuuuuntil we crossed Tonle Sap River and passed by one big roundabout that had one big replica of gun that was twisted at its pointer (represent the cessation of artillery I guess). 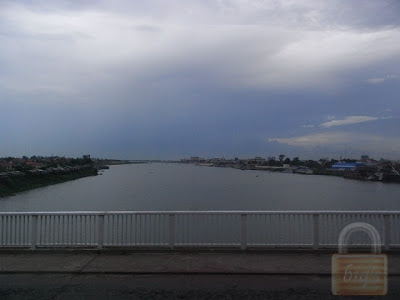 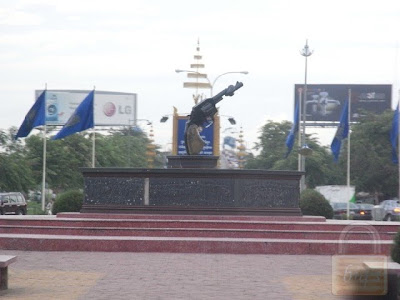 On the bus, we saw one KFC with Halal sign and decided to get it once the bus stopped. We need meat! Hahaha! The bus stop at one packed area where all motodups, a.k.a tuk-tuk drivers, waited at the bus door. No, they were not welcoming the tourist, they were waiting to get you and rip you off…hahahaha! Not all of them I must said. There was a company that controlled the tuk-tuk’s fee and it almost the same as the fee out there.

We showed the address to one guy who approached us, who worked with that tuk-tuk company. Both parties agreed with USD5 and off we went to the said hotel. We passed by few city streets that full with tourist on our right, and the famous Tonle Sap River on our left, the King Palace and Independent Monument at our front. The community was almost having the same healthy living style like Vietnamese and Thais, where they had this “senamrobik” by the park. 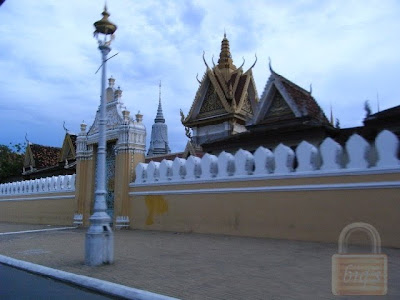 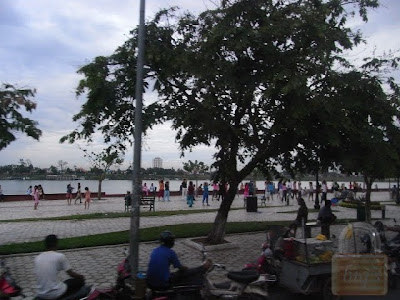 The good thing about searching this Golden Boutique Guesthouse that we stayed was, this hotel located right in front of the famous Khmer Surin Hotel and Restaurant. Just tell the name, all tuk-tuk drivers familiar of it. 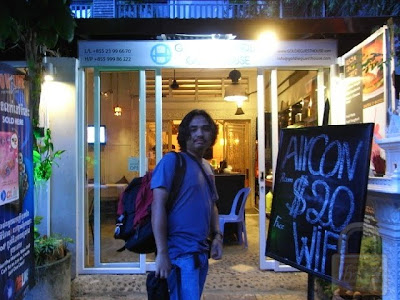 “Owh, this hotel is good…good…” with one thumb up.

I figured out, what he meant was, “expensive”. USD20 without breakfast?! Huh!

He passed us his call card and there was his name on it. He offered us for a city tour but we were too lazy to think about it yet.

“It’s ok Daroos, if anything, we’ll call you, ok?” yet we didn’t know how to use Cambodia payphone.

“It’s ok, we still cannot decide whether we wanna take a tour trip or not…” we walked to the room.

She threw us her sour acid face!

Just because we were Asian, she thought we have no money la? Yes, I travel cheap, so what?!

Hubby took his bath, followed by me. But when I used the toilet, the water didn’t stop coming in after I flushed! Whatever!

We went out for dinner and looked for one Bangladesh restaurant that supposed to be located at the end of the road. And yet we found another Bangladesh restaurant, New Maharaja Restaurant. We ordered one bowl of curry and two plates of rice. The waiter was Bangladeshi while the waitress was a Khmer. The food? Blergh…masakan India la, apa lagi. Terpaksa, dah itu je yang halal. 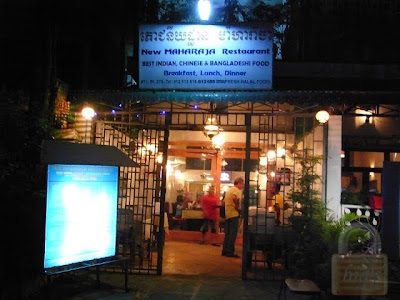 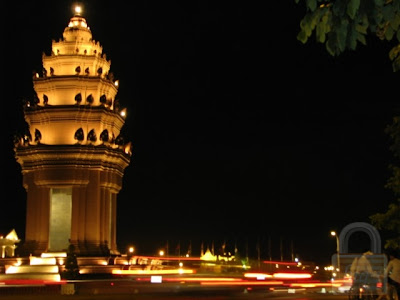 We tested our luck and snapped few pictures, though we know that our cameras were not built for night shot, but it worth a try when both of us managed to capture the monument in different modes and angles. 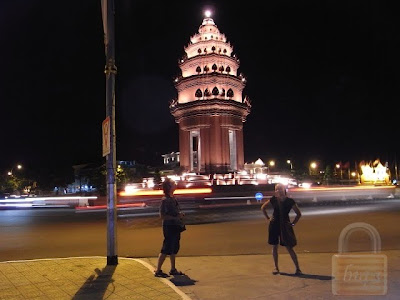 But, it’s a promise; we have to come back tomorrow to check it out during day time!

So rasenya i boleh paham apa yang u rase :))