The Day I Found That I Am Pregnant


I bought the cheapest UPT Test Kit, Disclosure, for RM5.90 at Watson, The Weld. My period was super regular and on time, so I got eager when I knew that I was pretty late this time. Well, I did few tests before but always failed. So, I wasn't sure bout this time.


I was 5 days late, so I thought, why not. I ripped off the test kit and tested UPT at 6.00am and guess what?! The result showed double line. Positive! I was stunned. NGANGA! "Is this for real? Is this cheap kit gives me wrong result?" I said to myself. 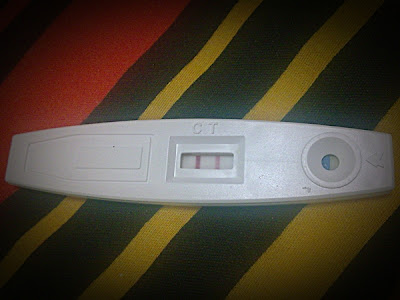 I quickly ran from master bedroom bathroom (nakedly) to the guest bathroom where hubby was in the middle of brushing his teeth (nakedly).I showed him the UPT Test Kit with big smile on my face. He didn’t understand at first, and said “Apa tu? Apa tu?”

I ran back to the master bedroom to get the Disclosure packet and ran back to hubby, and flashed the packet right on his face. He read and said “Pregnant? Yeayyyyy.” And he closed the bathroom door and asked me to take my bath. Pfft!

After we performed solat subuh, hubby snapped few pictures of UPT Test Kit and I saw his face glowing. I MMS-ed Kak Ngah and Kak Saba and they were extremely shocked. Kak Ngah cried along with me, and lots of advices given. She also asked me to see gynea to reconfirm.

I didn't tell everyone yet, instead, I told Skin, Na, Kak Liza, Akhmar, Liza DC, and the my team members.


We went to Klinik Jameaton at 8.00pm and did another urine test. I was expecting the doctor to say “Tahniah, puan mengandung.” like we always see in Malay drama but turned up, the nurse said it first. Alaaaaa! Haha! She then asked whether we wanted to do a scan and I said yes.

We went in to see the doctor and she said exactly what in the Malay drama did. Yes! She showed the UPT Test Kit and said the double lines are super clear. I told her my last cycle was 24 Jan 2013, at 10am. She smiled and told me that I was in 4 weeks and 5 days. We had a quick chit chat on TTC history (5 years 3 months) and she was quite shocked. She asked whether we did IUI or IVF, but told her we did it naturally.

She asked for tummy scan so I said yes, why not. I laid on the bed with two monitors on the right and before me. Doctor put some lubricant on my tummy and tried to find the sac, but it was hard to see it since it was still small. She then asked for my permission whether I want to go for vagina scan.

She then pressed my tummy few times. At this moment, I started to panic, coz she was asking whether I had any stomach cramp, then it could be an endometriosis. Double panic! I said I didn't feel any cramps. She asked me to take off my pants and she put on a condom onto the scan rod (360 degree camera). She finally saw the sac and showed to hubby and I. Thank God! And so I cried. The baby measured 4.6mm which tally the 4 weeks and 5 days of pregnancy. 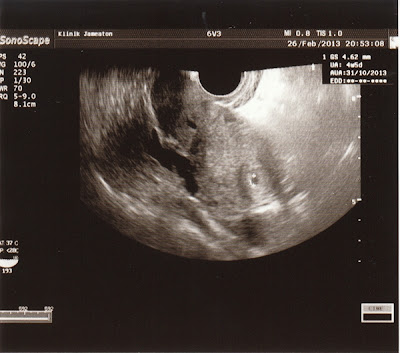 She also checked for other complications but she has confirmed that I had no cyst and such. She gave us a date for next appointment, and it was set on 26 Mac 2013, for heartbeat scan. That will be on 9-10 weeks of pregnancy. We really can’t wait!

I called Abah and told him that he will be getting a new grandchild. He was shocked and happy. He told Makcik as well, and I got lots of advices. I then called Kak Saba and told her the same thing, also, she gave me lots of advices.

I called Kak Ngah and again, told her the same thing. I tried to MMS-ed her the scanned picture, but failed. Athirah suddenly said that she will be no longer pampered by me, but I told her that she still be my no. 1, but the baby will be my 1.5 hehehe! She wanted a baby boy, to play rugby and do touch down. OMG! Crazy girl. But Kak Ngah asked for a baby girl. Kelakar. For us, either one, we take it. No issue.

Hubby called Mama and spread the good news. Mama congratulated us and gave lots of advices as well. Initially she thought that I was taking Biodex but hubby told her we did it naturally. Similar to others, she asked me to take extra care.

We finally decided to cancel off all trips for this year (HK/Macau in Mac, Mabul in May, Langkawi in July, and Padang in Dec), for the sake of my pregnancy. Actually, doctor has no issue with me flying in first trimester, but she said, if anything happen, I will definitely blame on the trip. HK can wait, she added.


1 Mar 2013 (Week 5)
As per advised by my colleague, I need to get a proper gynea, in case of something came up. So, I went to Columbia Asia and met Doctor Raja Juhaidah. She looked unfriendly and I didn’t like her at all. Wearing make-up, long necklace, tudung, baju kurung, like Datin.

I told her about my working nature and asked for some rest days, but she said no need. If miscarriage, it is due to chromosome. Pfft! Ok. But I started to get annoyed by her when she started to tell me about herself, instead. Her work in x-ray room was far unsafe. Hey doc, this is about ME, not you!

I then asked about how safe to have cats at home and she said, if I am infected, I was infected long time ago. Ok, sabar lagi. I showed her the Acid folic and Utrogestan gave by Doctor Jameaton, and out of sudden, she directly asked me "Do you know what is it for? What is it for?" Right in front of my face! Eiii geram!

But then she said it’s ok to consume. She then scanned and found the dot, and told us, yes, we are pregnant with 9mm size of the baby. "Ha betul la ni, betul la pregnant." Like huh? You think I lie? huh!

She asked to come back at 15 Mac, but I straight away decided not to continue with her. Everyone was also asking me to get a friendlier doctor, so that I won't get the pressure, everytime I went to see a gynea. Thus, I arranged an appointment with Doctor Seri Suniza from Prince Court Medical Center, as per recommended by Skin and Salhazira. She will be only available on May, so we decided to meet her on 21 May at 11.15am.


26 Mac 2013 (Week 8)
We went to Klinik Jameaton at 4.00PM and scanned. For the first time, we saw the baby wiggled and waved his palm. Doctor Jameaton then let us heard the heartbeat sound, where it can be heard clearly. The heartbeat was super loud and fast! Again, I cried. Doc Jameaton said everything was ok and the baby was doing well and the size was 19mm. Hubby then noticed for other heartbeats but he kept for himself. Another set of acid folic was given to me. 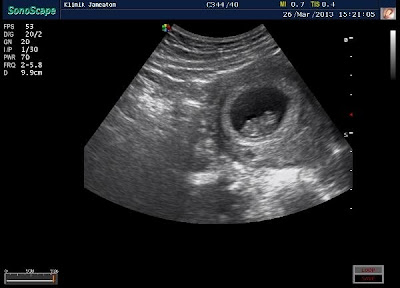 I still had my evening sickness and hubby took a good care of me, at all the time. At this point, I started to eat healthy foods and fruits. I can't take this, I can't take that. The following weeks, we started to dream big and went around the shopping complex, and did some window shopping on baby things. More advices were given by friends and families, but we didn't purchase anything yet.

By this week, I had announced it on FB and twitter. Almost all friends congratulated us and prayed for the best. I was happy that they were happy for us, even happier than us.


8 Apr 2013 (Week 10)
At this point of time, I was pretty happy, for I had lost my evening sickness. I ate more good foods and bought Anmum Mango Materna Milk. I stop taking acid folic, for this milk has all the needed nutrition. I felt super healthy, with minor backpain and fatigue. Anyhow, I still do house chores like sweeping, vacuuming, while hubby did the rest, including taking care of cats' litter box.

And I didn't know that losing my evening sickness wasn't a good sign...

Unbuttoned by Biqque at 3:35 PM

be strong.. and i know its easier said than done babe tp.. just be strong ok :)

Allah is the masterplanner...