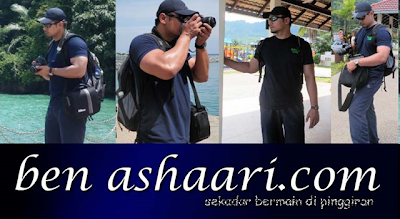 Who is this guy? Read here. He organized this what I called "Blog World 101" and invite all bloggers to come out with an entry, as per below.

Everyone calls me Biqque [pronunciation : bik]. Though some people mis-called me as big, bik, biki, bit, spoon (huh?), I still accept it. I do have real name but kind off hate it as it is too general, too funny, too overused. In fact, people thought that I am a "filipino".

There’s a reason why Datuk Lat wrote the book, “From Taiping with love”. I was born in Taiping on 14th Sept 1978, eight days before my other half. So it is true, Taiping is the land of love, kan?

I wasn’t a popular kid in tadika kemas. It’s becoz I was the ugly duckling who always being spotted following her brother around the kindy area, after being rejected by my two teenage-elder-sisters. But hell yes, I started to have boyfriend during this age, till I got married. (Sumpah, I don’t lie on this. Kihkih!)

Being the only sibling who entered herself in a half-boarding school was quite edgy for me, when I was intentionally got isolated by my own classmate due to one funny issue. I was being accused to rampas someone’s abang angkat, who he himself, didn’t even know he was the “official” abang angkat for my friend! Boleh tak?

I was then got offered by Mara Community College for a two years prep on American Associate Degree Program, which at the end, was an entirely spoofed by the management. Hahaha! I continued my education at UiTM, and graduated with Bsc (Hons) in Information System Management, a total confused-course between IT and librarianship. (Tepuk dahi.)

Anyway, I chose to be one of the millions IT kuli in one small-medium sized company somewhere around the outskirt area nearby the most kampung.com shopping complex. With a little bit of hardwork and outburst zombie-life, I managed to upgrade myself and be among IT kuli in one big and noted I-Balik-Malam company. (Go figure!)

I am now living in the place where jin used to bertandang with monthly shoplots break-in here and there (now gempak already you know, got police), with my beloved other half, a fat cat (who thinks he is a human), and no kids. Doa-doa la ye.

Blog. [noun, a journal written on-line and accessible to users of the internet]. I was introduced to blog world on the day I know how to write html codes. Though I learnt html ONLY to get a passing mark during Uni, I still try my best to apply it for my own interest. Similar to other millions of blogger, I have my own blog that I initially started in the sense of telling others on my travel tales, as well as tricks and tips.

Calling myself a blogger, indeed, experienced positive and negative feedbacks. Not to brag la kan, but most of the readers came from my own cliques and colleagues, not to mention my cyber-travel-friends as well, WILL definitely “like’ my posts and pictures. Haha! No, seriously, the only negative feedback that I’ve gotten was when I had this pool questions whether I am a fun traveler or vice versa. Out of 21 votes, 3 voted “Nope, sorry :(”. Kesian kan? Tapi ok la...dengki skit-skit. Hahaha!

Blogging for name and fame? HELL YES! Hahaha! Tell me, who doesn’t like to be famous? Jangan tipu la kannnn. The famous your blog, the noted you are! Kihkih! Obviously I like people to know my blog and read my posts, but in a good way lah. Coz what I am spreading now is the Beauty in Darkness of all the places that I’ve visited! Why sharing when you aren’t? That’s the definition of blog, read, write, or edit a shared on-line journal, if you didn't notice. So, spread the words ya’ll! :D

Proud blogger? Pffttt! (Gaya bosan.) 90-10. Most of the time, I’m proud. I was featured, I won contest, I organized photo challenge that gave RETURN FLIGHT TICKETS to people (don't play-play ar, even Canon-Air Asia gave one ticket only tau), you know, getting more and more stats and counters, things like that. The other 10%, well, I’m not. Reason why? I DON’T KNOW HOW TO DRAG READERS OUT THERE TO READ MY BLOG, LIKE REDMUMMY! (Mannnn, she’s good!)

Now Ben, I really want to be featured, and I don't care whether I don't win anything (what a liar), but what I want is like what you said, TO PROMOTE my blog. So Ben, hypnotized your 5000+ followers to be part of my readers ya? Hahaha!

Footnote : Credits to Ako who indirectly introduced this entry.

Unbuttoned by Biqque at 5:47 PM

This is about contest

i will always love reading ur entry... !!

You sound like me before but I have mellowed down after people called me Grandma! I was given 2 blog awards for best Grandma Stories too but I am a male, you see. Tak berbaloi! I like your writingsssssss!

coz i kan banyak drama
hahahaha